Robatayaki (炉端焼き, literally “fireside-cooking”) refers to a Japanese method of cooking similar to BBQ. Traditionally, different fresh seafood are grilled over a wide, flat open fireplace in the style of an irori, rather than a shichirin or other type of charcoal cooking implement using binchotan.

Binchotan is a very special ingredient in Japanese cooking. Yakiniku, Kushiyaki and Robatayaki all feature this charcoal that is made from oak. It can burn evenly and hold the temperature at over 800ºC. Due to difficulties in identifying the producing region, the name binchō-tan has come into broader use to designate white charcoal generally, and even products from outside Japan, as well as those made of other species, have come to use the name. However, the purist will only recognise the original oak version, and from Wakayama, where oak is in abundance. So, the proper Robatayaki restaurant must feature Kishu (old name of Wakayama) binchotan.

Robata originates from a centuries-old country style of cooking by northern Japanese fishermen around a communal hearth (irori) that serves as a cooking area and a source of heat, found on the northernmost island of Japan, Hokkaido. The fishermen needed a way to cook on the boats, so they encased binchotan coals in a stone box to protect the boat from the intense heat. After a government campaign depicting Hokkaido as an idyllic rustic area, this style of cooking became popular all over Japan. The first robata restaurant (named “Robata”) opened in Sendai, Miyagi Prefecture. Proving a successful formula, soon more robata restaurants followed, starting in Osaka. As of 1965, there were more than 10,000 such restaurants across the country.

While the setup varies, a common arrangement has the grill in a central position, whether as a hearth in a sand-pit as for the traditional irori, or on a raised dais, around which the customers are seated. In Japan, where the robata restaurant is often also a male-dominated drinking establishment (izakaya), this evokes a highly prized nostalgic feeling among the clientele. 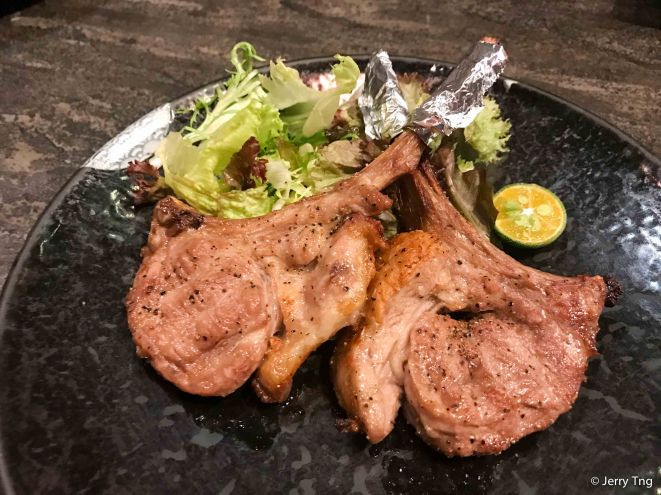 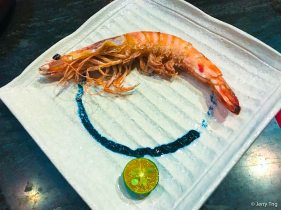 The other stuff, like sushi and sashimi, were not memorable. The quality of the sashimi-grade fish was not fantastic.

However the robata was of very good quality. The grilling was competent, but it would do better with less salt. We were every disappointed during this visit as there was very little variety available. Also, the meat dishes were so so.

Overall, I have been to better Robata in Shanghai, but the decor was not as posh or the service not as good. It would be a good place to entertain your friends and business associate because of these, but it is not a gourmand haunt.