Peach Blossom signifies love in the Chinese language of flowers. But this is not a date friendly restaurant, just like its moniker, the play called “Secret Love in Peach Blossom Land”. It served 淮扬菜 Huai Yang Cuisine in a modern setting. 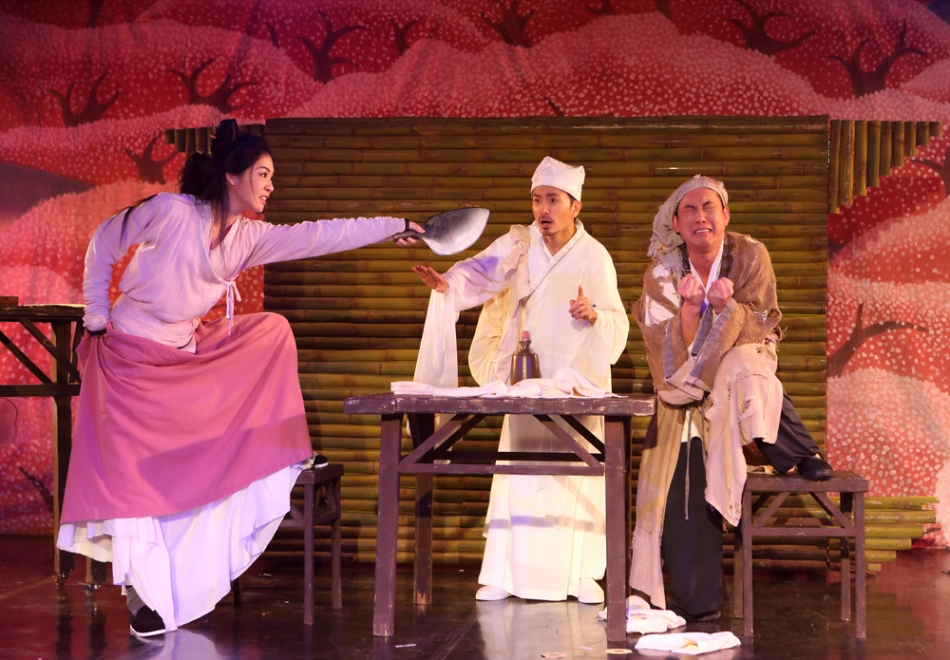 Secret Love in Peach Blossom Land (暗戀桃花源) is Taiwanese play by one of my favourite stage director and playwright, Stan Lai 赖声川. It intertwined the stories of two plays, a tragedy about unrequited love called “Secret Love” and a slap-stick comedy about an adulterous couple called “Peach Blossom Land”. Because of a mixed up in booking schedules, two groups of actors had to share the stage for rehearsals. So two groups of actors went on stage in rotation and accidentally “combined” the storylines.

When this restaurant was opened, it caused quite a stir for its decor. This was their new branch in Cloud Nine mall, next to Renaissance Zhongshan. For those who have been to Jiangsu area, you would be familiar with the stone bridges, little canals and wooden sampans, like the ones from Wuzhen.

It was a bit cheesy, but I thought it would be great for foreign visitors who have been to China for the first time or unfamiliar with the Jiangsu culture.

There are many different types of cuisines in China, generally divided by their regions or dialects. But when we refer to the Top Four, all would agree that would include Lu Cuisine 鲁菜、 Sichuan Cuisine 川菜、Cantonese Cuisine 粤菜、and Su Cuisine 淮扬菜.

Su or Huaiyang Cuisine originates from Jiangsu Province. It is often mistaken as Shanghainese as Shanghainese Cuisine borrowed techniques from Su Cuisine. Su Cuisine has often been used as the cuisine of choice for the National Banquet in China, a tradition that started with Mao.

Peach Blossom can generally be categorised as Shanghainese and Su Cuisine.

一品美极虾 Sautéed Maggi Prawns – When Nestle came up with Maggi Seasoning, the Chinese culinary scene took it as their own. So, what is Maggi seasoning? Maggi is a dark, hydrolysed vegetable protein-based seasoning sauce, which is very similar to East Asian soy sauce without actually containing soy. It is used most often in soups and sauces. It provided the umami that was provided by MSG, and quickly became the substitute of the simple soy sauce and MSG. The classic Sautéed Pawn 油爆虾 was quickly stir-fried with Maggi Seasoning to provide that unique sweet, savoury, indescribable umami.

飘香鱼豆腐 Fish Tofu – The soft tofu and fish were all cooked a la Mapo Tofu style. You cannot differentiate between the tofu and the fish in the brown, spicy sauce. You need a lot of rice to eat this.

剁椒鱼头 Steamed Fish Head with Chopped Chilli – This is a Hunan Cuisine, which was what was eclectic about Chinese restaurant these days. Specialisation is not their forte. And the fish used was usually a freshwater fish like carp or snakehead. The fish that night was a really big and fatty farmed carp. Luckily the amount of chili used covered up the muddy taste associated with freshwater fish. Served on some homemade pasta.

鲜虾沙拉蛋卷 Prawn Salad Cone – Cucumber, mango, mayo salad with fresh shrimp served in an ice cream cone. Not sure if the base sand can be eaten, but we only ate the stuff in the cone. Nothing spectacular, only the presentation was innovative.

剁椒虎皮蛋 Century Quail Eggs in Vinegar and Chili – a modern interpretation of another Hunan dish. Instead of the usual century egg that was smashed with vinegar chilli, this one served the quail eggs whole soaked in vinegar and cut chilli.

橙香蟹粉豆腐 Crab Roe Tofu in Orange – The orange gave a very nice fragrant to this classic Shanghainese dish. A very small portion so you don’t feel gerlat (queasy) from eating too much of the very rich tofu and crab roe.

金屋藏娇 “Beauty in a house” – This dish has a very beautiful name. 金屋藏娇 was the story of Emperor Han and his queen, when he was very little, he told his cousin that he would build a golden house to let her stay in if he became emperor. He made good his promise when he became the third emperor of the Han Dynasty and brought one of the most glorious period in history. That’s why Chinese are known as the Han people.

The based was like a tortilla crust made into a bowl to contain the stir fried bamboo shoots, chicken bits, peas, shrimps and cashew.  Not a GF friendly dish as the sauce was made of oyster sauce.

桃花源红烧肉 Signature Braised Pork Belly – Classic Su Cuisine, sweet, savoury, saucy, sticky all in one dish. The fat melted away in your mouth but the skin held its texture. The meat was quite soft. Very tasty. I especially loved the eggs. They were boiled eggs, deep fried and then smothered with the same sauce. Yummy.

御制虾饺皇 Hargow – Most people know only Cantonese dimsum. But Su Cuisine features dimsum as well. But this Hargow is definitely Cantonese, as Su dimsum are usually glutinous rice based and emphasise the sculpting and shaping the exterior.

What I liked was the presentation. Everyone gets one, with a bit of soup still in the mini Le Creuset pot. So that’s the Su Cuisine link, soup in a dumpling like Xiao Long Bao.

酸菜鱼 Fish Cooked in Pickles – the same carp fish slices cooked in lots of sour pickles. I loved the soup. Tangy and lots of umami.

鲜淮山炒银杏 Chinese Yam with Gingko – simple stir fry dish that you can make at home.

Very popular during meal time. Reservation recommended but difficult. Queuing is long, but you can leave your (China) phone number, and they will send you a message when the table is available, usually an hour or more queue.

2 comments on “In love 暗戀桃花源 @ Shanghai”