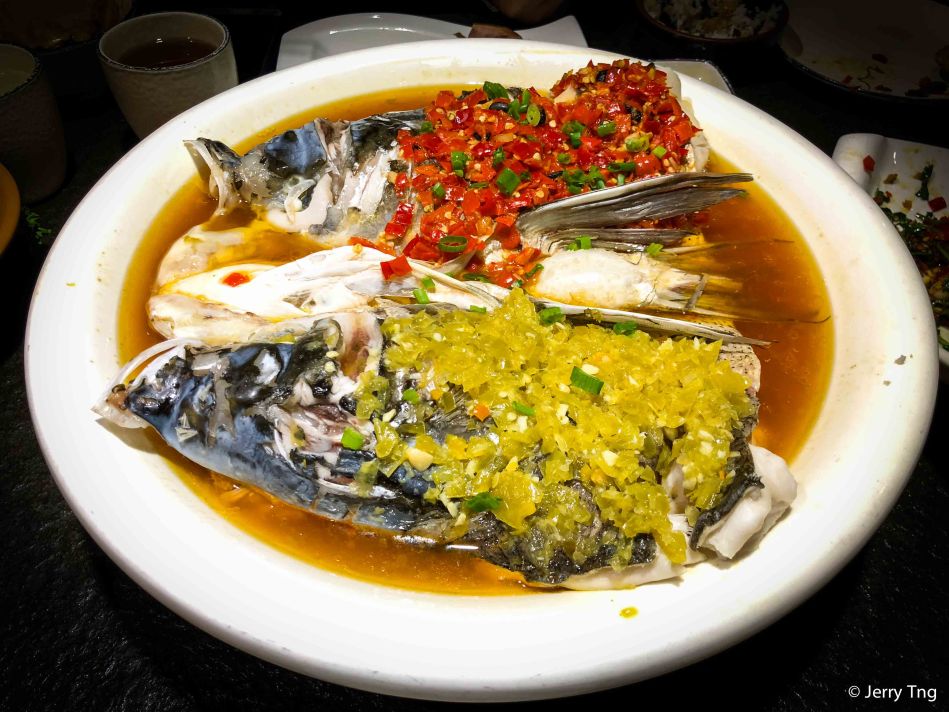 Merry Christmas Everyone! It’s not quite the White Christmas I was hoping in Beijing. In fact, it was so dry, it had not snowed so far this year [2017]. Nevertheless, we were so cold that we need something spicy to warm the stomach.

The easiest way to get to this Hunanese restaurant was by the lifts that can be accessed from the side of the building, instead of weaving through the myriad of boutiques and shops and escalators.

You cannot miss such a name for a restaurant – “Yum Yum Flavour”.

Waiter, the egg has turned bad

Century egg, also known as preserved egg, is a Chinese preserved food product and delicacy made by preserving duck, chicken or quail eggs in a mixture of clay, ash, salt, quicklime, and rice hulls for several weeks to several months, depending on the method of processing.

Through the process, the yolk becomes a dark green to grey color, with a creamy consistency and strong flavor due to the hydrogen sulfide and ammonia present, while the white becomes a dark brown, translucent jelly with a salty flavor. The transforming agent in the century egg is an alkaline salt, which gradually raises the pH of the egg to around 9–12, during the curing process. This chemical process breaks down some of the complex, flavorless proteins and fats, which produces a variety of smaller flavorful compounds.

Some eggs have patterns near the surface of the egg white that are likened to pine branches, and that gives rise to one of its Chinese names, the pine-patterned 松花 egg.

Chinese used century eggs as a starter dish, and the Hunanese would used this together with grilled jalapeño to make a really spicy start to the meal. The century egg was pounded together at the table with grilled jalapeño to produce a really spicy, creamy, salty, alkaline mixture that would not appeal to everyone. For some reasons unknown to most, I find this combination of sulphite and saline very appetising.

The dish has a very romantic name – Stir-fry pork from the Moon. The sliced pork belly was stir-fried with green sweet peppers (Shishito) with a black bean sauce and little red chilli that added more heat to the dish. Served on a crispy dish made of popped rice, you break a piece of the puffed rice and eat with the chilli-pork. Innovative, but I am skipping the carbs.

Chairman Mao could not skip this favourite of his whenever he went home to Hunan. Stinky tofu Hunan style is blackish and drier than the others. It is usually deep fried and eaten with a lot of chilli. Here, the chef interpreted the traditional with the tofu stir-fried with garlic, chilly and other spices to recreate the chilli sauce that was used in Hunan, and with a liberal amount of Chinese parsley. The flavours exploded in your mouth – the fragrance of the parsley with the savoury of the tofu, the spiciness of the sauce with a whiff of the tofu gone bad. It was all worth it.

Perilla leave has a minty, fragrant taste and best combined with seafood and mollusc. It is used here to provide the main flavour profile with snail meat and zucchini. As a stew, it went very well with rice (or the puffy rice in the earlier course), and the chilli added to the taste.

You County in Hunan is famous for bean curd because of excellent water. Dried bean curd is tofu with the liquid squeezed out. Some would smoked the results, like You County Bean Curd, which is smoky and smooth.  Cooked in a claypot with salted meat and lots of chilli (note the recurring theme?).

Braising is usually done in a pot of really old poaching liquid in Chinese cooking. Chefs are reluctant to throw away the goodness and the flavour continues to build on top of each other. Pork knuckles are thrown into this poaching liquid and braised over a slow cooking fire, almost like sous vide. Result – a complex flavour yet still tender pork knuckle.

The quintessential Hunanese dish – Steamed Fish Head with Chilli. In this case two types of chilli are used. The red and fiery fresh chilli and the pickled and milder green chilli. Fresh water carps are used typically for this dish, and the chilli takes away the muddy taste that is associated with freshwater fish of this size. Last to come on this night, but still tasty.

Surprising that it was this good, and yet inexpensive. The service was prompt, and I really like the food here.

Recommended if you like fiery Hunanese cuisine in the capital.