After a long company meeting in Wuxi, we were treated to a very sumptuous local dinner just by Taihu 太湖.

Wuxi Cuisine is among the top 14 cuisine styles in China. Its flavor is light and sweet, focusing on seasonal ingredients. Seafood such as shrimp, crab, eel, fish and other lake products is an important ingredient and is generally cooked simply to enhance the natural taste and to retain the original flavor.

Wuxi Spare Ribs 无锡排骨 is the most popular local dish and is the specialty to look out for people come to Wuxi. It features the braising the pork ribs in a stock of rice wine and soy sauce, and spiced with ginger, anise, cloves and black peppercorns. The resulting unique red-sweet sauce on the top in order to give rich taste gives it the moniker “red cooking” 红烧.

Bean Curd in Casserole 无锡面筋 – This is a home-style dish but cooked with special cooking utensil – the Chinese casserole 砂锅. Put bean curd and other vegetables into the Casserole together with chicken soup and sesame oil, then bring to the boil, simmer. When it’s done, the bean curd is white and soft, the dish taste fresh and has rich nutrition.

Wuxi Xiaolongbao 无锡小笼包 is different the ones made popular in Shanghai by Nanxiang even though they were from the same roots. Wuxi-style is much sweeter than the Shanghai-style, but they are both succulent and filled with umami goodness.

If there’s ever such category, you saw it here first, in live2makan.com. Generally, people will categorise everything that swims in water under seafood. But in China, especially for folks around Jiangsu and Zhejiang, “lake food” 湖鲜 is a category on its own.

Deep fried white baits 油炸银鱼串, the first of the “three whites”, it had been battered and the deep fried into a crisp. What I liked was the way they skewered the white baits into a yakitori length and then deep fried, it made for easy eating and pretty presentation.

There is a children jingle that goes something like this. “Fish has their ways, shrimps have their ways, snails spin by the riverside, rhodeus leap onto the river bank.” The jingle reminds children that everything has their own pathways, and if one does not study hard, one will not be able to make it in life, just like the rhodeus will never be able to leap over the bank to become a dragon.

Rhodeus (Rhodeus sisnensis, 鳑鲏鱼) is a miniature carp that is found in abundance in Taihu. Unlike their cousins the carp, they will never grow bigger than 10cm and destine themselves in the riverbanks and lakesides where there are plenty of water plants and freshwater mussels, kind  of their version of the “longkang” (drain) fish. They are also cross-breed as a freshwater aquarium fish. If the idea of eating an ornamental  fish turns you off, you may scroll forward now.

It was an excellent source of calcium and proteins in the days when resources were limited. In Taihu and many waterways around Jiangzhe area, rhodeus can be caught all year round because they were not picky on water quality and they grew and reproduced very quickly. The ones bred for food are different from the ornamental species.

Salt and pepper rhodeus 椒盐鳑鲏鱼 is a simple dish of deep frying the rhodeus with just a simple marinate. And then it is stir-fried in salt and pepper for that extra kick. When done well, you can eat the whole fish, head, bones and all. It is excellent with ice cold beer on a hot summer night.

Taihu freshwater snails in Chinese wine stock 太湖螺丝 is excellent as an appetisers. Everyone in Wuxi grew up sucking one of these shells as a snack like an American kid with their potato chips. It takes a bit of skills – a sudden suction to dislodge the flesh from the shell and delicately avoiding the intestines and ah-hum at the end of it. The snail, like escargot, is tasteless. They borrowed all their flavours from the stock they were cooked in.

Stir-fry MaShan vegetables 马山野菜 used the vines and leaves of pumpkin.  The vines of pumpkin has been used as a vegetable in Wuxi area for a long time, and it has plenty of fibre and nutrients. It tasted like kang kung, another vegetable that can grow almost anywhere.

Wuxi tofu with clams casserole 蚌肉老豆腐 was really delicious. The tofu was not the refined Japanese variety that we get in Singapore, but the rustic version made locally with lots of air pockets inside the tofu. It soaked up all the stock the was made up of dried bamboo shoots, pork ribs and chicken bones. And for added umami, clams were added in abundance. While it was not a soup, the stock was so yummy that you would just scoop bowls of it.

Every household in China would know how to do stir-fry shredded potato with julienned pork 土豆肉丝. The potato was not cooked until soft, but still had the crunch.

Fish head and tofu casserole 鱼头豆腐煲 used a large carp head. The soup was filled with the taste of the fish and tofu, just as nice as the tofu casserole. Carp is a freshwater fish and can grow very large. But because it is so full of fine and criss-cross bones, one would not usually serve the body of the carp. Instead only the head is used.

Braised free-range chicken 红烧竹林鸡 used the local bred chicken that ran free in the bamboo forest around the mountains. Because it was free-range, the meat was tougher than your Tyson variety but firmer and more flavourful.

It was hairy crab season, and what better place to partake in this annual ritual than just beside Taihu.

So what’s the difference between the Taihu and Yangchenghu hairy crab?

Yangchenghu 阳澄湖 is located between Taihu 太湖 and the Yangtze River. The hairy crabs migrate from Yangchenghu towards the Yangtze delta for mating in September and October. The local fishermen harvest the animals during this migration. Because of the rounded pebbles at the bottom of the lake, these crabs have white belly and golden mitten. Taihu hairy crab tends to be larger and not as pretty because the bottom of the lake is more gravel than pebbles.

Yangchenghu crabs are no longer in the top spot, thanks to deteriorating water quality. They’ve since been taken over by breeding farms in Taihu, Wuxi, and the dam of Henan Anjia in low-lying Chongming Island, Shanghai. While die-hard Shanghainese still insist on hairy crabs from Yangchenghu, most people have already converted to the later harvests. 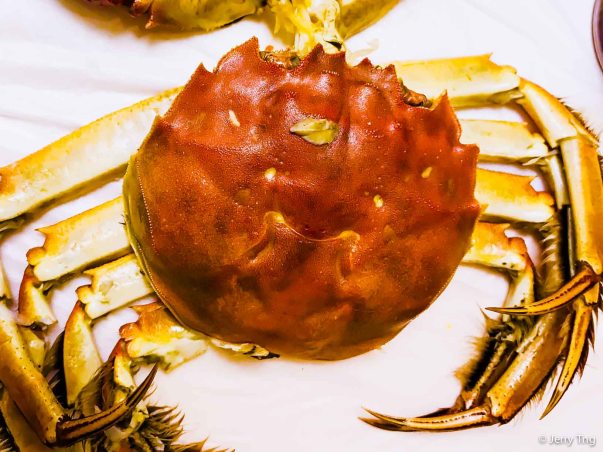 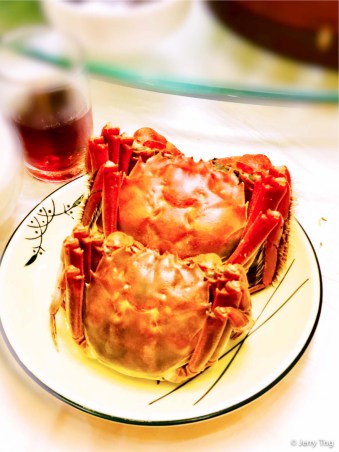 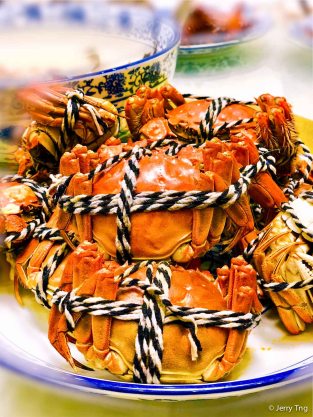 As we are having this near the source, it was much cheaper than Shanghai and the crabs were harvested later which meant that they were allowed to grow bigger than those harvested earlier and bred in tanks. The ones we had, the males were almost 700g and the female were 500g, considered large in the hairy crab world.

Guzhu Road is like ground zero for eating lake food. There are the famous ones that shaped like boats and extend out to the lake but those were tourist traps. This one came highly recommended but social media, and it turned out to be so.

The dinner for 26 persons came up to around ¥4000 (less than USD 600) including drinks. Each of us had a pair of hairy crab and plus all the food we had, it was really value for money.