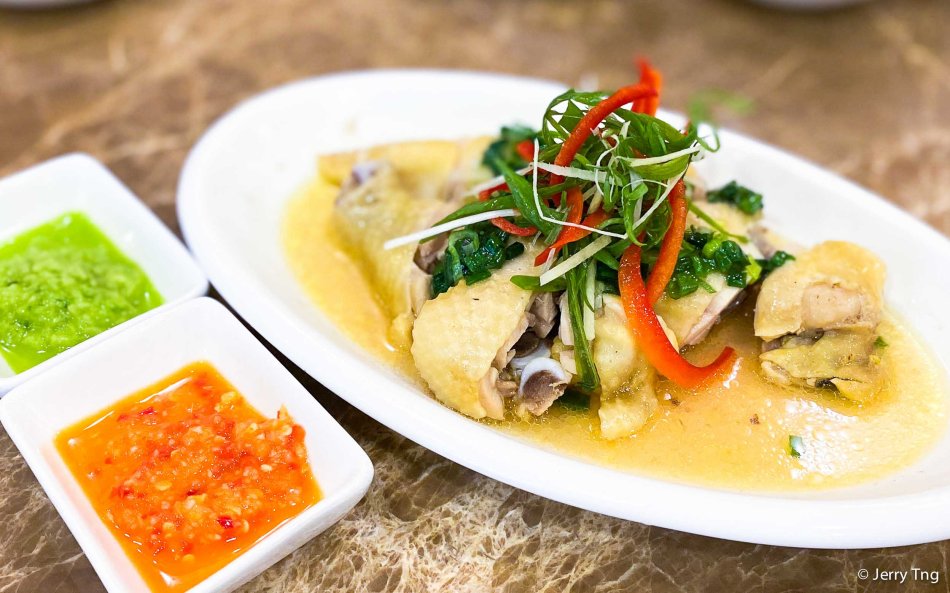 Causeway Point is a mall that is constantly changing. Taking over the space of Watami is Xing Hua Lou that features Heng Hwa cuisine, also known as Putian cuisine, characterised by the use of fresh seafood and produce, and seafood broth..

The first Heng Hwa restaurant to open in Singapore would be Putian at Kitchener Road. They were the one to introduce Heng Hwa cuisine to all of us, and they are so good at it that they also have the rare privilege of getting a Michelin star for a Chinese restaurant.

Xing Hua Lou first entered into our radar through foodcourts. Not to be confused with Heng Hua Restaurant in Yishun, Owner/Restauranteur Daniel Cheng has turned their hawker concept into a proper restaurant with the latest in Causeway Point.

Our lunch started off well with steamed chicken with scallions. The chicken was tender and tasty. The scallion and chicken drippings were so savoury I finished a whole bowl of rice just with the drippings.

The spicy pig trotter aspic was unlike the Teochew style that i was familiar with. The aspic was slightly spiced with pepper. But it was the bits of pork that were off-putting. They should do with bigger cuts of meat.

The loofah with conpoy was tasty and good with rice.

The signature fried oysters was like 耗爽 that I had at the Chiuchow club in Hong Kong.

Their pan fried mackerel tasted deep fried rather than pan fried. The overall result was quite dry.

I can’t remember which soup I wanted to order but it was not available. However, the daily soup – pig stomach soup – should be featured permanently on the menu. It was not as peppery as the Teochew style but full of flavour of the chicken stock and delicate taste of the pig stomach. It could do with some button mushrooms to heighten the umami.

Putian Lor Mee looked nothing like the local version of black lor mee. The Henghwa white lor mee used a thick creamy seafood gravy, which was not too starchy nor too sticky. The large bowl of noodles was full of ingredients such as clams, prawns, beancurd, mushrooms and vegetables. The noodles were soft and chewy.

The roselle jelly was nice, cool end to the lunch.

Service was a highlight here, despite that it was opened only for a couple of months. The waiting staff were knowledgeable and provided attentive service throughout our meal. Total damage was $131 for all these food, which is not exactly fair value, but it is a good alternative to Crystal Jade next door.