Sanhoyan serves Taiwanese fusion cuisine that is innovative and fun to eat. Very instagrammable presentation, with deliciousness and well.

What is Taiwanese cuisine? When the Chinese mainlanders came in the Ming dynasty, they brought with them hometown cuisines of Hakka and Hokkien where most of the immigrants were from. Then it incorporated local aborigines spices which further expanded its own cuisine when the Dutch colonised the island. This was followed by Japanese colonisation in the late 19th and early 20th century, ending only with end of WWII and the Chinese took over again. And when the Nationalist lost the civil war and retreated to Taiwan, it brought along Hunan, Sichuan, Shantong, etc troops from all over China and therefore, the cuisines from all over the place. What followed the next 60 years was the development of an eclectic amalgamation of cuisines into what is now called the Nouveau Taiwanese cuisine.

Shredded yamaimo (mountain yam) can be a challenge to work with because it turns slimy very quickly due to the sap of the yam. Dressed simply with a garlicky sweet and sour sauce, paired with half a cherry tomato, a tiny stalk of broccoli and ikura (salmon roe), this is a delicately balanced appetiser.

Making up of two strangely distinct components – century eggs and stinky tofu – and then combined using a spicy kung pao sauce, you get the 宮保皮蛋臭豆腐 deep fried stinky tofu and preserved egg with kung pao sauce. Surprisingly, these two ingredients blended very well together. The alkalinity of the eggs balanced with the fermented and lingering smell of the tofu. The kung pao sauce acted as the glue to bind the two firmly together.

This course consisted of two parts: 叁和院虎咬豬 dongpo pork, which is similar to the Shanghainese braised pork belly; and 虎皮刈包 tiger patterned guabao, which is a open-faced bun with tiger strips pattern on it.

First, you take a piece of the bun and open it at the middle, it then forms a taco-like container. Be careful, the bun is hot. Then you take a slice of the dongpo pork and stuff it in the middle of the bun, like a hamburger. Finally you add whatever condiments you fancy, the most common are the crushed peanut, Chinese parsley and preserved mustard leaf.

The result is a bun filled with delicious pulled pork that melted in your mouth with savoury, sweet and the satisfaction of fattiness from the pork belly. No wonder it is called the Chinese hamburger with such affection.

Golden clams are a native shellfish found in abundance along the extensive Taiwanese shorelines. When boiled in soup, it provides plenty of umami, and has the same effect as MSG minus the dryness in throat that some may experience. Just add Taiwanese basil and garlic, you get a really sweet and tasty clear soup bursting with umami.

Bird’s nest fern shoots are a vegetable source of the aborigines of Taiwan, and cordia fruits are also the spices of the aborigines. The Chinese took them and pickled them to form a salty and sour condiment that can be used to stir-fry vegetables or steam fish.

So this dish is a Chinese stir-fry with aborigines ingredients, very tasty.

Looking like a soufflé, the sweet potato cheese tart was a tangy and savoury pastry. Instead of custard, they used mashed sweet potato as the filling of the tart. The melted cheese cap on top of the puffed pastry added that balance of salt to the rather sweet filling.

The glutinous rice dumplings were made like little marbles. You have to guess which is peanut butter and which is sesame. So if you have an allergy to peanuts, it’s like playing Russian roulette.

The beautiful dessert course continued with three buns with different fillings. The rabbit bun has walnut and red bean filling, the black dustball has peanut butter filling and the chinchilla has salted duck egg yolk filling. Remember that this is 2015, such innovative and cute presentation was not common. 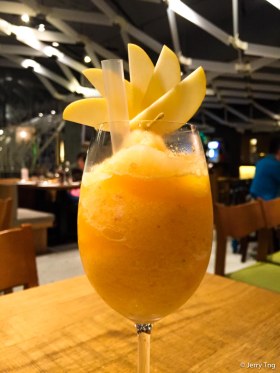 Located in a back alley of the busy Zhongxiao East Road, it has to keep up with fierce competition from the choices of restaurants around that area. So the food was good, the service attentive and prices reasonable. They have special set menus that you can mix and match the different signature dishes depending on the size of the group. Recommended.