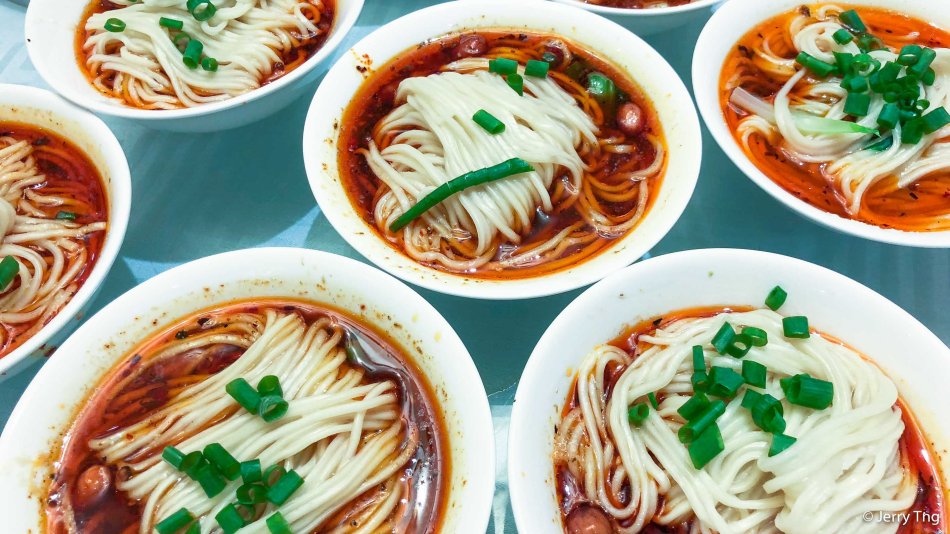 Since first opening its doors in 1993, YuXin has consistently offered authentic Sichuan dishes. After a quarter of a century, Yu Xin remains popular and retains a large base of loyal customers.

There is a YuXin Sichuan Cuisine restaurant near the Jianguomen area, inside Changan Theater. So if you are near Wangfujing and Guomao (CBD), this would be the perfect location to try really authentic Sichuan food in a comfortable and not so crowded location.

Even though ‘saliva chicken’, the literal translation of the dish, doesn’t sound particularly appetising, Koushui ji is one of the most famous dishes in Sichuan cuisine. The chicken is first steamed before being dunked in iced water to firm up the skin. The chicken is then bathed in a numbingly spicy chilli sauce with toasted peanuts and sesame seeds and a garnish of green onion.

While its exact origin is unknown, it is believed that the name came about when famous Sichuan writer and poet Guo Moruo (1892-1978) described a chicken dish so visually stunning that just looking at it “makes the mouth water”. Another reason for the name is because of the generous use of Sichuan peppercorn in the chilli oil, which numbs the lips and makes the mouth drool.

A master stock (Chinese: 鹵水 or 高汤) is a stock which is repeatedly reused to poach or braise meats. The Sichuan braise stock is very different from Teochew. Firstly, it is slightly spicy and numb due to the addition of peppercorn. And it has the light fragrance of Chinese herbal medicine like liquorice.

Ingredients like pig’s ears, pig’s tripe, lotus roots and wakame seaweeds can be braised to aromatic goodness, and the different textures of the ingredients make them very tasty and interesting appetisers. The crunch of pig’s ears vs the softness of tripe, most of these ingredients would not have their own distinct flavours if not for the braising liquid.

Another simple appetiser – century eggs are cut in quarters and drizzled with black vinegar. The kick came from the chargrilled jalapeño that had been chopped up and sprinkled on the eggs. Another ingredient, candied ginger, added that palate cleansing spiciness.

A simple salad of romaine lettuce with a sesame peanut butter sauce.

Legend has it that in the 1940s – a period where nutrition was scarce in China owing to continuous armed conflict – a butcher surnamed Wang in Ciqikou, Chongqing, sold his shop’s innards and scraps at very low prices. One day, Wang’s wife (who had the surname Zhang) came up with the idea of instead putting all the cheap odds and ends into a soup. The outcome was a delicious broth. By accident, Zhang put duck blood curd into the broth, and found that the curd tasted even silkier and made the soup more flavourful. The dish soon became known as Mao Xue Wang.

Shui zhu yu is a Sichuan dish, with a name with the literal meaning of “water-cooked fish“. It’s actually cooked mostly in boiling chilli oil. Fish slices (in this case, grass carp), a large amount of chilli pepper and special Sichuan bean sauce, vegetables (bean sprouts and Napa cabbage) and a lot of chilli oil is required.

It is believed that the origin of the dish came from Chongqing around the 1980s. A chef in the municipality won a prestigious culinary competition with a dish that featured the aforementioned cooking method but only to cook other meats like pork and beef. Soon, he became so famous for the dish he was frequently asked by family and friends to make it. One day, a friend brought over a few river grass carp. Without other protein on hand, the chef decided to filet the carp before poaching it in boiling broth for flavour. To his surprise, the tender flaky meat of the fish complemented perfectly the spicy and numbing sauce.

The only course that we didn’t like and didn’t finish. And it’s not Sichuan.

This classic Sichuan dish was invented by the legendary chef Huang Jinglin 黄敬临 [1] when he was an Imperial Chef with the Qing palace. This dish was then made famous as a State Dish by his disciple when Premier Zhou Enlai served it as one of the courses in State Banquets.

Zhou served it to the Japanese delegation during the State Banquet and at first glance, the delegates were quite turned off by the presentation of the course. A couple of Beijing cabbage hearts in clear water, and the name of the dish “blanched cabbage”, they didn’t expect much of this. After tasting it, they all exclaimed the deliciousness in such a simple dish. The cabbage was full of flavour and umami even though the whole presentation looked simply bland.

Dan dan mian used to be a street food but is now ubiquitous to Sichuan restaurants across the country.

It was believed that during the Qing Dynasty, a man named Chen Baobao from Zigong, Sichuan Province sold noodles on the street. To travel easily between twisting alleys and ramshackle houses, he put a carrying pole (a dan zi) on his shoulder, with two baskets on each side, one holding the stove, the other noodles and pots. Over time, his savoury and fiery noodles gained such notoriety people started calling it ‘dan dan mian’ which if translated literally means ‘peddler’s noodles’. To this day, dan dian mian is served more like a snack than as a main dish.

I really don’t understand why Sichuan food is so popular! I’ve never really got it – and I love spicy food but, to me, a lot of Chuancai is just oily spice that leaves your mouth in need of copious amounts of sorbet.

This chain restaurant provides well-prepared Sichuan cuisine in fairly comfortable surroundings. Every dish we ordered was excellent, and the prices very reasonable. This level of service can be really hit or miss (often get miserable waiting on staff…but you are sometimes pleasantly surprised).