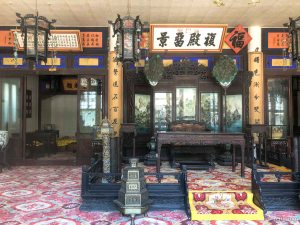 The interior of the hall is furnished with hundreds of precious antiques, most of which were made in the Reign of Emperor Qianlong, such as the desk and the throne. These are rosewood framed and sandal wood centered with exquisite carvings. The screen behind the throne is composed of two layers of glass painted with both traditional Chinese and Western landscapes. On the desk, necessities for studycan be found, especially the four stationery treasures of China. During that time two annex halls were furnished with many precious objects, such as the Arhat Bed, the screen wall, the fans crossed behind the throne, kang table, an insert screen, and so on.

0 comments on “Hall of Jade Ripples”