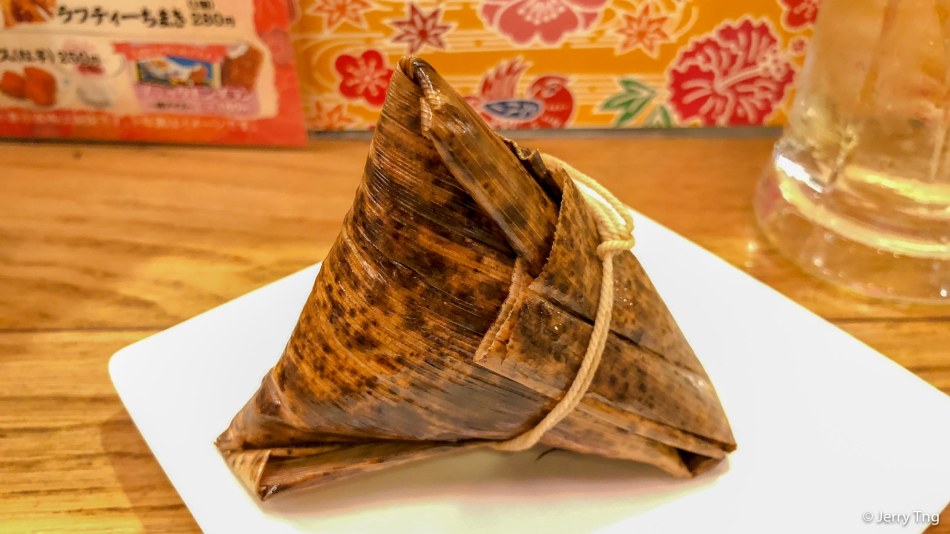 Right near Morishita Station, Nankurnaisa is an Izakaya that serves Okinawan and Kyushu cuisine.

Japan is an island archipelago that one can experience the four seasons in a day. From the winter wonderland of Hokkaido to the most southern tip of Okinawa islands that is tropical and sunny.

Okinawan food is known for its originality. From goya (bitter melon) to umibudo (sea grapes), from horse liver sashimi to refute (braised pork belly) to pig’s ears, they can be strange and delicious at the same time. And then you have spam.

This is a favourite beer snack in Okinawa. In fact it’s something people eat in Okinawa all the time. Umibudo is a seaweed, but it looks more like green caviar. As each ball pops between your teeth the whole thing seems crunchy, which then turns to a creamy texture. And it tastes like the freshest seafood you’ll ever eat. Delicious.

ちまき (Chimaki)  or dumplings, are enjoyed on May 5th to celebrate Japanese Children’s Day. It is believed chimaki originated from Chinese culture. Zongzi 粽子, the Chinese equivalent of the Japanese chimaki, is a sticky rice dumpling. Traditionally, zongzi is enjoyed on the fifth day of the fifth lunar calendar, or May 5th, to celebrate the Duanwu Festival, also known as the Dragon Boat Festival.

Savory chimaki, much like the Chinese zongzi, includes a mixture of sticky glutinous rice, meat, and vegetables. Some of the meats commonly used are chicken and pork, while vegetables might include young bamboo shoots (takenoko), shiitake mushrooms, carrots, burdock root (gobo), chestnuts (kuri), or gingko nuts. Savory chimaki is often enjoyed as an appetizer, snack, or meal.

Their chimaki was very disappointing – the filling was sparse and the content cold.

One of the specialty Okinawan food is “ Sururu Karage. Sururu is an Okinawan dialect for “kinabigo”. When snorkeling in the sea of ​​Okinawa, you may encounter hordes of Sururu.

Simply deep fried with a light sprinkling of flour, it is crispy and full delicious protein and omega-3. Simply dip it with salt and you have an irresistible beer food. Eat it with plenty of Orion beer from Okinawa or highball.

In April 2011, a food poisoning incident that killed five people occurred at a Yakiniku restaurant in Toyama Prefecture. The culprit was raw cow liver that was contaminated with E.coli. Since 2017, cow liver sashimi was banned. However horse liver was spared from the ban, because horses have a higher body temperature and therefore perceived to not harbour E.coli. Go figure.

The liver was crunchy and had a metallic taste of iron in the liver. It has to be seasoned with lots of sesame oil to neutralise the iron. You have to be Count Dracula to say you love this dish.

The izakaya has not English speaking staff or English menu, so you need to know basic Japanese. Nice introduction to Okinawan cuisine.