This is the first part of three posts of the same restaurant – never had I ate at the same place consecutive for so many days, we pretty much tried everything on the menu.

The Taste of Shaoxing

The main fare of the restaurant is Jiangzhe 江浙 cuisine. The key characteristics of the cuisine are the robust sauce that they used that is sweet and savoury at the same time, use of yellow wine in their condiments for marinating food and use of river seafoods.

The first one was the most elaborate because we had guests and the resort pulled out the stops to do a formal ten-course dinner for us.

The moment we entered the private dining room, the appetisers were already laid out for us on the lazy Susan.

Not quite the Jiangzhe cuisine, the Sichuan inspired dish was always a great way to start dinner because as the name suggests, you salivate just thinking about it.

In the past, this dish would use river shrimps and soaked alive and served raw. These days, due to hygiene and contamination of the river ways, this method is becoming less popular. The cooked prawns were soaked in yellow wine and therefore “drunk”. Very tasty and the goodness was the head of the prawns – the miso according to the Japanese.

In the novel by Lu Xun, the main character would spend all his money from his meagre pay on Shaoxing wine and broadbeans, and sometime when he was more affluent, asked for a plate of five-spiced bean curd. The bean curd is braised in a soy sauce braising liquid that has been infused with bay leaves, cloves, cinnamon and five spice. The result is spectacular as a snack for drinks.

The three treasures are mud snail 泥螺, river crab claws 河蟹爪 and jellyfish 海蜇. They are marinated in different sauces, but all made from yellow wine and other condiments. I especially like the mud snail as the ones from Shanghai are too sweet and you don’t get them as often in Singapore anymore.

Crunchy mountain yam cut into cringle fries and drizzled with osmantheus molasses. Strange to start with an appetiser so sweet. But autumn is the season for osmantheus, and the fragrance filled the mouth as you eat it.

The last appetiser was served after all of us were seated because this dish is easily contaminated as it is served raw. A whole live mud crab is soaked in wine and soy sauce, and the crab drowned in the marinade and transformed into a delicious dish. Cut into size, you can taste the roe and flesh that have inherited the taste of the wine and soy sauce. One of my favourite dish of all time, despite I had food poisoning from unhygienic preparation a couple of time.

The funky delicacy has been ingrained in the culture of Shaoxing for more than 2,500 years, its future is suddenly uncertain. Stinky tofu, like other street food across China, is caught in the crosshairs as Chinese authorities strengthen the country’s food safety laws. But tonight, it is served as part of the formal dinner by steaming it with fermented black beans (another strong smelling food) and minced pork. Delicious! But not all my guests enjoyed it 🙂

Mount Kuaiji 会稽山 was an important site for ancient China’s Yue civilisation and was legendarily connected with the Xia dynasty’s Yu the Great, who was said to have convened a gathering of his nobles there and to have died at the spot during a hunting trip. Legend has it a gigantic fish was caught by a deity with a giant fishing rod using a bait of a whole cow and Mt Kuaiji as his stool. Since then, it was referred to giant carp fish head that is used for this dish. Unlike the other versions I have tried (Hunan, Sichuan, etc), this uses a savoury sweet brown sauce to braised the humongous fish head. Yummy.

A classic Jiangzhe dish using river shrimps and flash frying them in oil. It’s the freshness of the shrimps, baby.

A dish filled with umami from the Chinese ham (salted pork), the shredded mushroom and fish slices.

A Shaoxing classic, yam is steamed and then mashed into yam balls, vegetables are chopped up and the two are cooked in a heavy stock. Delicious and filling soup.

Shaoxing is famous for river product, and none more abundant than white fish. It has been used for the famous Shaoxing dried fish, a bit like our salted fish, except that used this river fish instead. Of a certain size, it can be quite tender and sweet, what we experienced with this plate of steamed white fish.

Made with the salted fish from the region, it is a deliciously simple vegetarian dish.

Chinese ham is simply salted meat and it goes very well with cauliflower.

乌干菜 or 霉干菜 is literally translated as “black dried vegetable” or “mouldy dried vegetable” and is native to Shaoxing. It involves the salting of green vegetables and drying over time to produce a fermented preserved vegetable. 小笼包 Soup dumpling is a Jiangzhe special and is well-known around the world. Only in Shaoxing you will find both ingredients combining into one unique dish. The taste of the dried vegetable needs some getting use to, but that’s a familiar taste I grow up with – Teochew has something similar salty but less strong.

The restaurant is part of the Dayu Kaiyuan Resort 大禹开元度假村 in Shaoxing, located next to the burial place of Emperor Yu 大禹 of Xia Dynasty, the first dynastic “Emperor” of ancient China. More about that in another post.

We were stuck there for 3 days for a company retreat and for that reason, we ate in the restaurant for three consecutive days for lunch and dinner, except for one, when we want to visit author and revolutionist Lu Xun‘s birthplace, the city of Shaoxing, and the famous restaurant that he immortalised in his novel “Kong Yi Ji” 【孔乙己】. 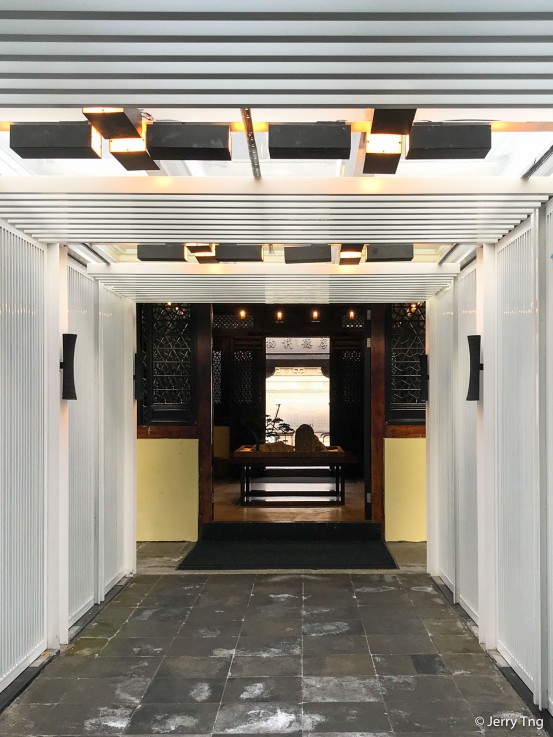 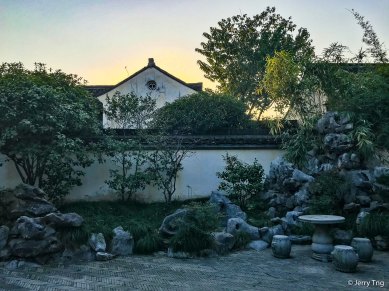 The food was pretty good, the service was attentive (especially when you are dining in the private room). The only thing missing is dessert. A plate of cut fruits is not exactly dessert and that’s where most Chinese restaurants would have to work harder.

Not sure if you would make a special trip there – the resort is quite out of place. But if you are visiting Shaoxing and going to Dayu Mausoleum, you can make a detour here for a nice dinner.