At the base of Tianxin Pavilion 「天心閣」 in Changsha, Hunan, there stood a solitary bell to commemorate one of the darkest day in Changsha’s history.

On 7 July 1937, after the Marco Polo Bridge Incident, as the Imperial Japanese Army drove straight in, large quantities of people in the coastal and occupied areas moved to Changsha. It was then that a devastating disaster was approaching Changsha. On 25 October 1938, Wuhan was annexed by the Imperial Japanese Army, the rear base Hunan was turned into the frontline of the Second Sino-Japanese War.

On November 7, holding a military meeting in Changsha, Chiang Kai-shek said that all strategic materials that were not evacuated in time and ground architecture were used by the enemy after Wuhan fell. which fueled the strength of the enemy. Chiang Kai-shek directly telegraphed to Zhang Zhizhong, the then governor of Hunan government to tell him that if Changsha fell, Zhang must burn and destroy the whole city. Zhang Zhizhong drew up a plan of burning the city. As Tianxin Pavilion was located at the highest point of the ancient city Changsha, it was chosen as the sign point of setting on fire. 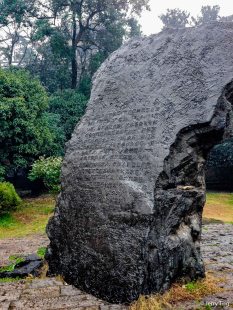 As the code of the telegram on 12th was “Wen” (文), and the fire was set up at night, Xi (夕) means night, the fire was referred by people as “Wenxi Fire“. Although Changsha was burnt and destroyed by Wenxi Fire, but it didn’t stop the Imperial Japanese Army’s attacks on Changsha. From September 1939 to December 1941, they massively attacked Changsha for three times, all repelled by the guarding army. Changsha finally fell to the Japanese on the forth attack in 1942.