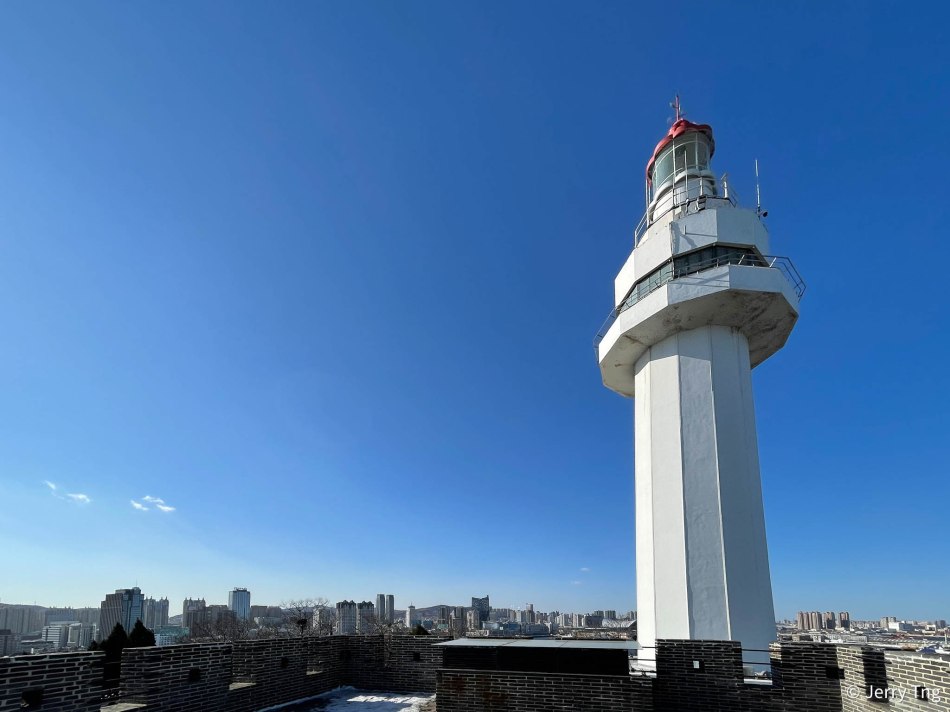 This lighthouse is the symbol of this coastal city in the Northeast China. Yantai Lighthouse can be seen from any corner of the old city.

Yantai Hill Lighthouse 烟台山灯塔 is an active, modern maritime lighthouse built in 1988, even thought the station was established in 1905.

The lighthouse is painted white, while the lantern dome is red. It is located at the original site of the Beacon Tower 烽火台 on Yantai Hill.

Origins of the Lighthouse

In the 5th year of Tongzhi (1866), the British-controlled Donghai Customs 东海关 built a simple lamphouse and flagpole with a wooden pillar roof on the beacon tower. These can still be seen on postage stamps from that period.

In 1905, it was rebuilt into a lighthouse with 33,000 candles and an effective range of 31.5 kilometers. It was approximately 6 m (20 ft) tall with square pyramidal crenellated stone tower.

Built as a watchtower, the original Beacon Tower 烽火台 crowned the hill that looms over the east side of the harbour. A lantern added in 1905 converted the tower to a lighthouse.

Both the old and new lighthouses are the landmarks of Yantai City, and they are also important navigation marks to and from Yantai Port. However, the new lighthouse is controversial because it was rebuilt after the original lighthouse was demolished and disregarded the historical significance. In 2008, the Yantai CPPCC proposed to demolish it and rebuild it based on the designs of the old lighthouse and beacon tower. It was (luckily) never implemented.

This flagpole with a shape similar to “wei” 未 is the semaphore pole. Semaphore is an alphabet system defined by the International Maritime Organisation (IMO) to help ships to send messages to each other at sea and with the land.

It was an auxiliary part of the original lighthouse in 1905 and was used to communicated with ships entering and exiting the harbour. The flag mast is a wooden structure, and the pole body is made of high-quality southern fir, about 20 meters high.

It was also used for important events. When VIP arrived by boat, they would hang the “10,000 flags” to show welcome and friendship. In 1912, Mr. Sun Yat-sen was invited by Yuan Shikai to go to Beijing for talks. When passing through Yantai Port, the “10,000 flags” was raised on the flag pole to welcome him. And he stayed at the Christon along North Road.

There’s a small exhibition of maritime artefacts that were collected when the old lighthouse was taken down. It included many information of the development of modern maritime codes and equipment. Worth a quick look, but nothing really historic.

View from the Top

After the visit to the museum, you can take an elevator up to the top of the lighthouse. At the top, there’s an observation gallery that offers a 360˚ view of the city.

This video is loud! The wind howling in the background was picked up by the mic on the phone. But you can see the panoramic view of the Zhifu District 芝罘区 of Yantai. Old Yantai was called Chefoo 芝罘 and this district was the original city of Yantai.

Chaoyang Street Scenic Area is undoubtedly an outdoor museum for people who like modern European architecture. In addition, there are several bars and restaurants along the street, so it’s a great place to come people watching. And if you have time, you must go up this lighthouse. It was quite an experience.