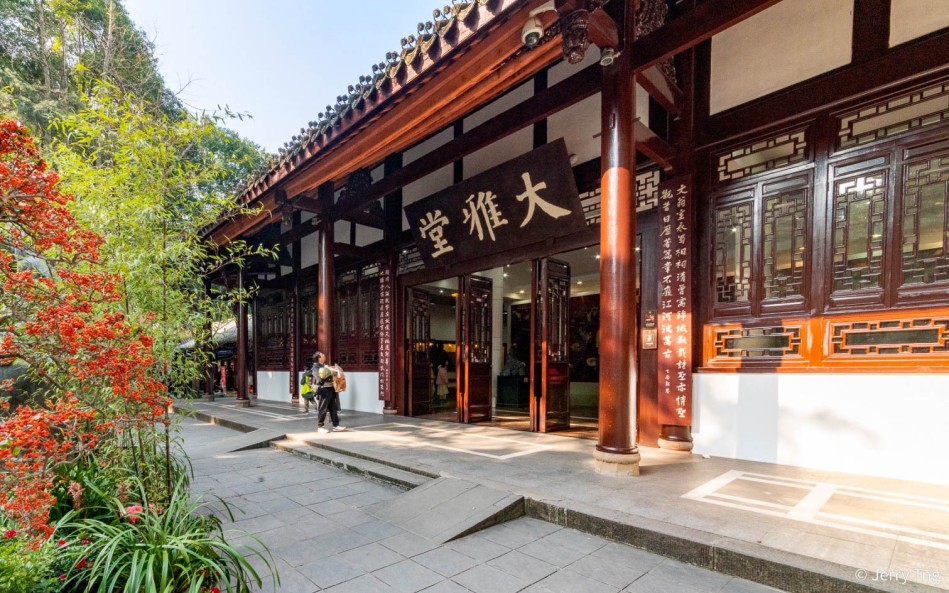 From the South Entrance of Chengdu Du Fu Thatched Cottage Museum 成都杜甫草堂博物馆 (“The Cottage”), there are series of exhibition halls and attractions that were added during the major renovations of 1955 and onwards.

Most of the buildings here are built after Chairman Mao visited The Cottage in 1955 and instructed the Sichuan cadres to preserve this place. Building and improvements had taken place over the years, with the latest building (Pagoda of Buddhas) completed in 2005.

Also known as Duchess of Ji Shrine 冀国夫人祠, the shrine was to commemorate the heroics of Duchess of Ji (also known as Madam Huanhua 浣花夫人). It is said that after Du Fu left Chengdu, Cui Ning 崔宁, Duke of Ji 冀国公, turned part of Du Fu’s old residence into a villa for his concubine, Madam Ren 任氏. She defended Chengdu when her husband was away and defeated the enemy. She turned her house as a temple. After the death of the Duchess, the monks painted a portrait of her to commemorate her. The shrine has been changed several times, and was destroyed by the end of the Ming Dynasty. It was not until the Guangxu period of the Qing Dynasty that it was rebuilt as the shrine now.

The elegant and chic representation of the characters “草堂“ inlaid with broken porcelain is embedded on the shadow wall 影壁 at the south end of the Flowery Path. Late Qing Dynasty, Zhou Shanpei 周善培, officer in charged of education 四川劝业道道尹 built this mosaic which was damaged and restored several times. When Chairman Mao visited the Cottage in 1958, he stared at these two words for a long time. Since then, it has become an attraction and a photo spot.

In the Bonsai Garden, there is the Corridor of Du Fu Wood Craved Poems 杜诗书法木刻廊 built in 1999, displaying more than 100 of Du Fu’s poems in calligraphy woodcut works. It is selected from thousands of authentic calligraphy of Du Fu’s poems written by celebrities of all dynasties. It is engraved onto Nanmu 楠木 panels, which is of considerable ornamental value. The poetry, calligraphy, materials and craftsmanship are considered as the “four masterpieces” 四绝.

Orchids are considered the most revered plant by scholars and literati, stand for reclusive and are placed in front of bamboo (integrity), plum (perseverance) and chrysanthemum (simplicity). So it is not unusual to find an orchid garden 兰园 among the classical Chinese architecture. The garden has all the elements of the Chinese garden – water, pavilion, gallery, shed and Taihu stones for stone formations.

Night Rain in Spring Garden 春夜喜雨园 is a sculpture garden recreating a few scenes that were depicted in Du Fu’s poems.

There are other sculptures scattered around the garden, and this one depicting the historical meeting of literati greats, one of them is Li Bai and of course, Du Fu.

Stone Steeles of Du Fu Poetry 杜甫千诗碑 is an art project that integrates poetry, calligraphy, inscriptions, gardens, sculptures and ancient buildings. Its spatial layout is divided into two parts: The Cottage and Huanhua Brook. In the Cottage, from the thatched cottage, along the line of Bonsai Garden, Orchid Garden and Caotang Academy, the original wall is used to engrave poems and presented in the form of walls and corridors. Calligraphy works are mainly sorted according to the age of the calligrapher’s life.

At present, a total of 1,455 poems of Du Fu’s surviving poems, 1,483 Du Fu’s calligraphy works and 233 Du Fu’s poems and seal engravings were presented in The Cottage Museum and Huanxi Park.

The Hall of Odes 大雅堂 was originally the Mahavira Hall 大雄宝殿 of Caotang Temple 草堂寺, which was thought to be the original site of Du Fu’s thatched cottage or “Caotang” 草堂. It was named after the title work of Huang Tingjian 黄庭坚 (yes, the same guy enshrined in Gongbu Shrine 工部祠) called “Annals of Hall of Odes”《大雅堂记》.The three words “Dayatang” 大雅堂 on the door were the calligraphy of Yan Zhenqing 颜真卿, a famous calligraphy master from the Tang Dynasty. The Hall of Odes displays the largest large-scale glazed lacquer murals and 12 sculptures of famous poets of all dynasties in China, vividly showing Du Fu’s life and the development history of Chinese classical poetry.

The Exhibition Hall 景杜堂 is a collection of old photographs of dignitaries and leader like Chairman Mao who visited The Cottage over the years.

Totally can skip this as it has no relevance to Du Fu and just a sucking-up exercise by the management of The Cottage.

Pagoda of Buddhas 万佛楼 is in the Nanmu forest to the east of the Cottage. It is a new landmark that was completed in 2005. The purpose was to fulfil the old saying of Chengdu, “Chongli Pavilion in the east and Pagoda of Buddhas in the west”.

There are some more minor buildings in the South Cluster, most of which are not open to public at this writing.

Du Fu Thatched Cottage 杜甫草堂 is a museum and memorial for Tang Dynasty poet and politician, Du Fu 杜甫 (712-770 AD). He is known as the Saint of Poetry 诗圣 and had written over 1,400 poems during his lifetime. The memorial is located in a 24 acre (97,000 square meter) park by the side of a stream called the Huanhua Stream 浣花溪 in Chengdu’s western suburb. Du Fu resided in a thatched cottage at the site where he took refuge in Chengdu during a war.