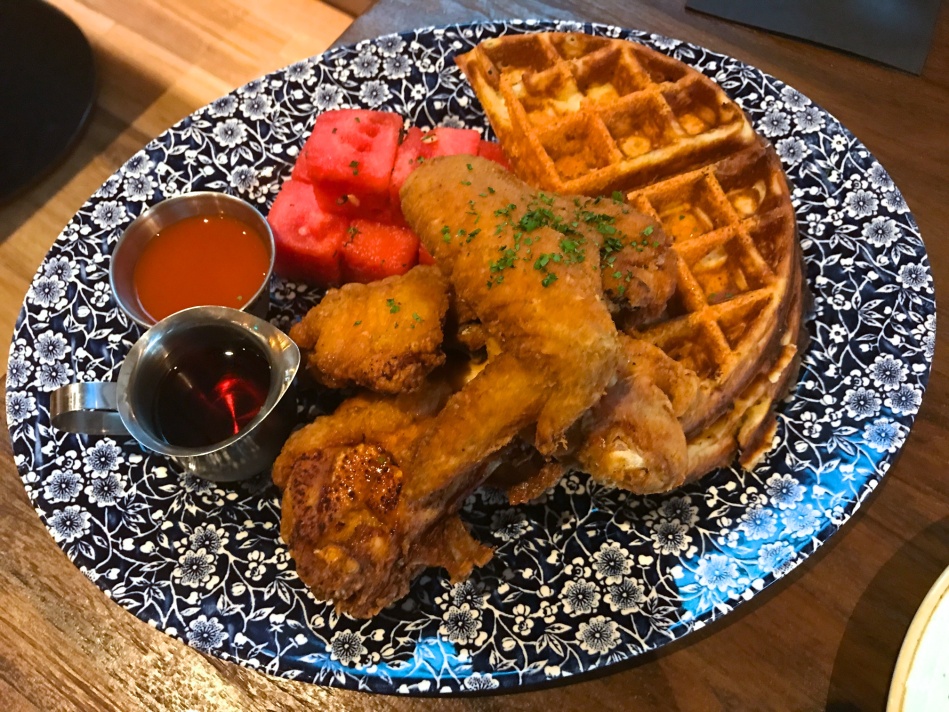 Fried chicken to me is still what defines comfort food and Southern cuisine. I would go to the Yardbird in the Venetian in Las Vegas when I go there for my annual user conference. A concept of the acclaimed restaurant and chef John Kunkel, it serves Southern cuisine and their signature dish is Fried Chicken. I have secretly wished many times that they open one in Singapore. And my wish came true in July 2017.

When we talk about American Southern comfort food, fried chicken, corn on cob, grits and biscuits come to mind. My favourite has to be fried chicken, but given my conditions, I can only eat these in moderation. And when it comes to fried chicken, we grew up with KFC. The salty, oily version by Colonel Sanders would be my comfort food everytime I was stressed and stuck in a foreign country. Not until I was introduced to the true blue Southern Fried Chicken when I visited South Carolina for the very first time, that was when I came acquainted to a whole category of Southern Comfort Food.

When Yardbird came to town, I had to pay my respect with my darling and to see if they kept the formula. First, the name was changed to The Bird. Fortunately, I can still recognised the “Run Chicken Run” motto and the rustic decor and design, despite the name change. I was told the name was changed because another company that sell Yakitori has registered The Yardbird as a restaurant before they did. OK, I am still waiting for that bird to land.

And according to their menu’s description, it consisted of “fried green tomato, poached farmer’s eggs, Allan Benton’s Smokey Bacon, charred lemon hollandaise”. OK, it’s egg benedict on crab cake with a piece of crispy bacon. With marketing and the right words (“not just bacon, but Allan’s bacon”), it became a gourmet starter and costed 3 times more.

How did it taste? I don’t like the crab cake – too wet, did not hold when combined with the egg and the hollandaise was too sour for my taste. Should have stick to the dishes I knew.

For the main course, we ordered a plate to share. Given the experience I had with American portions. I double-checked with the waiter, and he said that “it’s the same as US”. No, it wasn’t.

It consisted of the signature “Lewellyn’s Fine Fried Chicken” – 4 pieces of a chicken that consisted of a drumstick, a thigh, a breast and a wing. Unlike KFC, you cannot choose all dark meat. And again lifted from their menu, “Our chicken is all natural, never treated with hormones or dyes, and that is just the beginning! Our labor of love begins with a 27-hour brining process, then we dredge it in our secret recipe of spices and flour, followed by the final step of frying to perfection.”. It came with a honey hot sauce in a small stainless steel vat, chilled spiced watermelon, and Vermont sharp cheddar cheese waffle with bourbon maple syrup. That’s as much as it was the “same”.

The chicken tasted like I knew from Yardbird. The crisp and the brine, not oily, were familiar. However the size of the bird was much smaller. The breast was not as juicy, given its size and deep fried, it must have lost much of its moisture as a result. They need to tweak the cooking time given the size of the bird. The waffle was the saving grace.

We had no room for dessert, so that would do for the Brunch.

Recommendation: Yes, it’s much better than KFC, and definitely closer to home than Las Vegas. But stick to their fried chicken and biscuits, everything else is so-so.

The restaurant is towards the MFBC end of the MBS.

The Bird Southern Table and Bar
B1-07, Galleria Level
The Shoppes at Marina Bay Sands