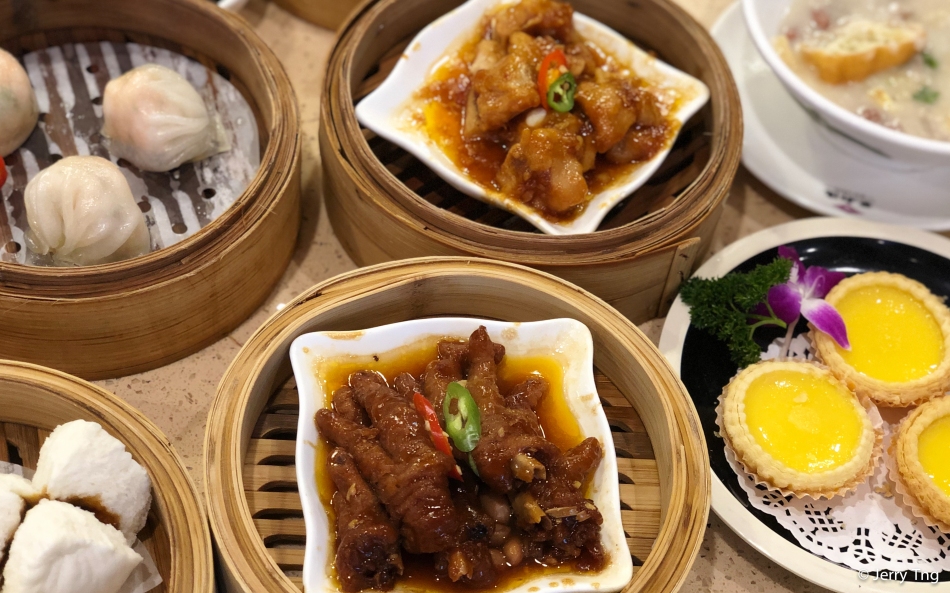 点都德 (Diandoude) is one of Guangdong’s most famous restaurants and has several branches in Shenzhen. Specialising in traditional yum cha (or dim sum) delicacies, the restaurants motto translates to “preserving the old Guangzhou yum cha culture”.

They serve mouth-watering dimsum in an atmosphere that transports you back to ancient Canton. It is common to see elders sitting and drinking tea for hours and hours. Don’t be afraid to sit there with a book and simply soak up the atmosphere while sipping tea and eating delicacies. Just don’t do it during lunch time.

The first dish to look for is 金莎海虾红米肠 Red Rice Rolls with Shrimp and Dough Fritters. Arguably the best dish on the menu, the crunchy, shrimp filled, dough fritter 油条 wrapped with red rice roll has a unique texture and taste. It’s crunchy, savoury and umami from the shrimp. Unlike other rice rolls where the sauce was poured onto them, these rolls came with both sesame and soy sauce dipping sauces on the side so that folks can determine by themselves how much sauce they need on these delicious bites. 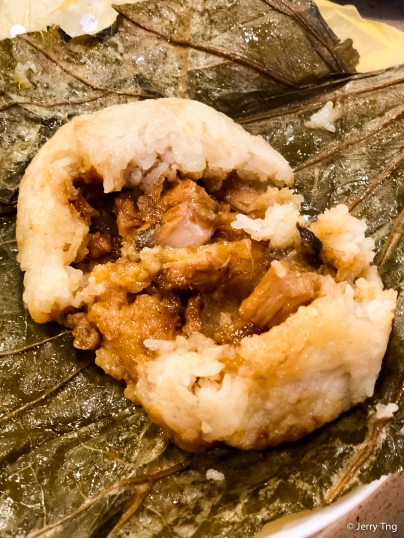 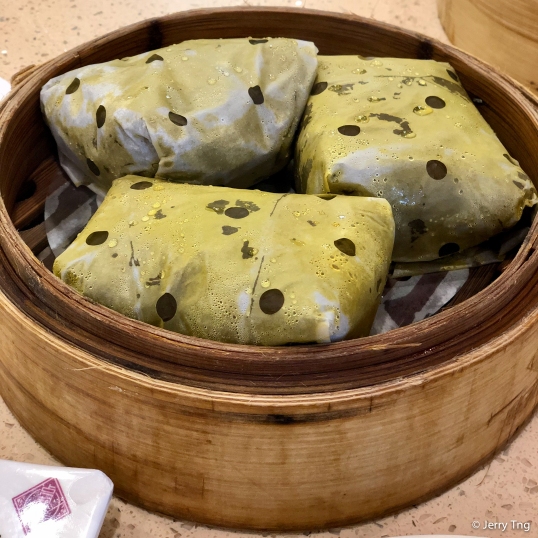 蜜汁叉烧包 Charsiu bun. A good charsiu bun needs to have the 开嘴笑 “laughing” breaks on top of the bun. The charsiu needs to be a mix of lean and fat pork with enough sweetness, stickiness and just enough filling into the bun. They have done well, but not outstanding.

金牌虾饺皇 Shrimp dumpling. Each one of these dumplings had at least 2-3 shrimps, making them plump and satisfying.

腊味排骨饭 Chinese sausage and pork rib rice. Cannot be compared to Keung Kee, but this was a filler, so it would do.

百合酱蒸凤爪 Chicken feet in sauce. A good chicken feet has be completely braised in the cooking sauce. The sauce they used was not too sweet and had a distinct 陈皮 dried mandarin orange peel taste that I didn’t like. However, it can be considered a very good chicken feet.

荔湾艇仔粥 Liwan boat porridge is not supposed to be a luxurious version of porridge. It is supposed to be a humble down-to-earth porridge that was served by family who lives in the boats in Hong Kong. It has been popularized in Hong Kong and Guangzhou and become a fast food item for those who are looking for a quick serving of porridge. As this porridge originated from the inhabitants in the boat, it is logically that most ingredients are seafood though there are also beef and pork.

The origins: It is commonly known as boat porridge 艇仔粥 in Guangzhou because the soup is served on sampans that plied Liwan Lake on the western outskirts of the city and its fresh taste is imbued with the spirit of the water villages of southern China. In the past, Litchi Bay (荔枝湾) in the western suburb of Guangzhou was a popular gathering place for men of letters and refined scholars at dusk in summer. While cruising the river, they were served with boat porridge prepared on dedicated boats. The owners of the boats delivered bowls upon bowls of boat porridge on the shore and to tourist boats on the river. Over the time it has become the most famous porridge in Xiguan 西关.

香煎萝卜糕 Fried carrot (radish) cake. I have no idea why they called it a carrot cake, because the main ingredient is actually radish. You can taste the radish, but I wouldn’t mind that they fried it a bit more.

明虾蟹子烧卖 Pork siumai with shrimp and crab roe. An oversized siumai, the amount of MSG on some of these dimsum made them really tasty. You can almost taste the MSG in these siumai. Personally, I prefer the smaller and bite-size version.

松化鸡蛋挞 Egg custard in puff tart. These egg tarts were very tasty with the puffy crust like a French pastry, yet the distinct Cantonese sweet egg custard. 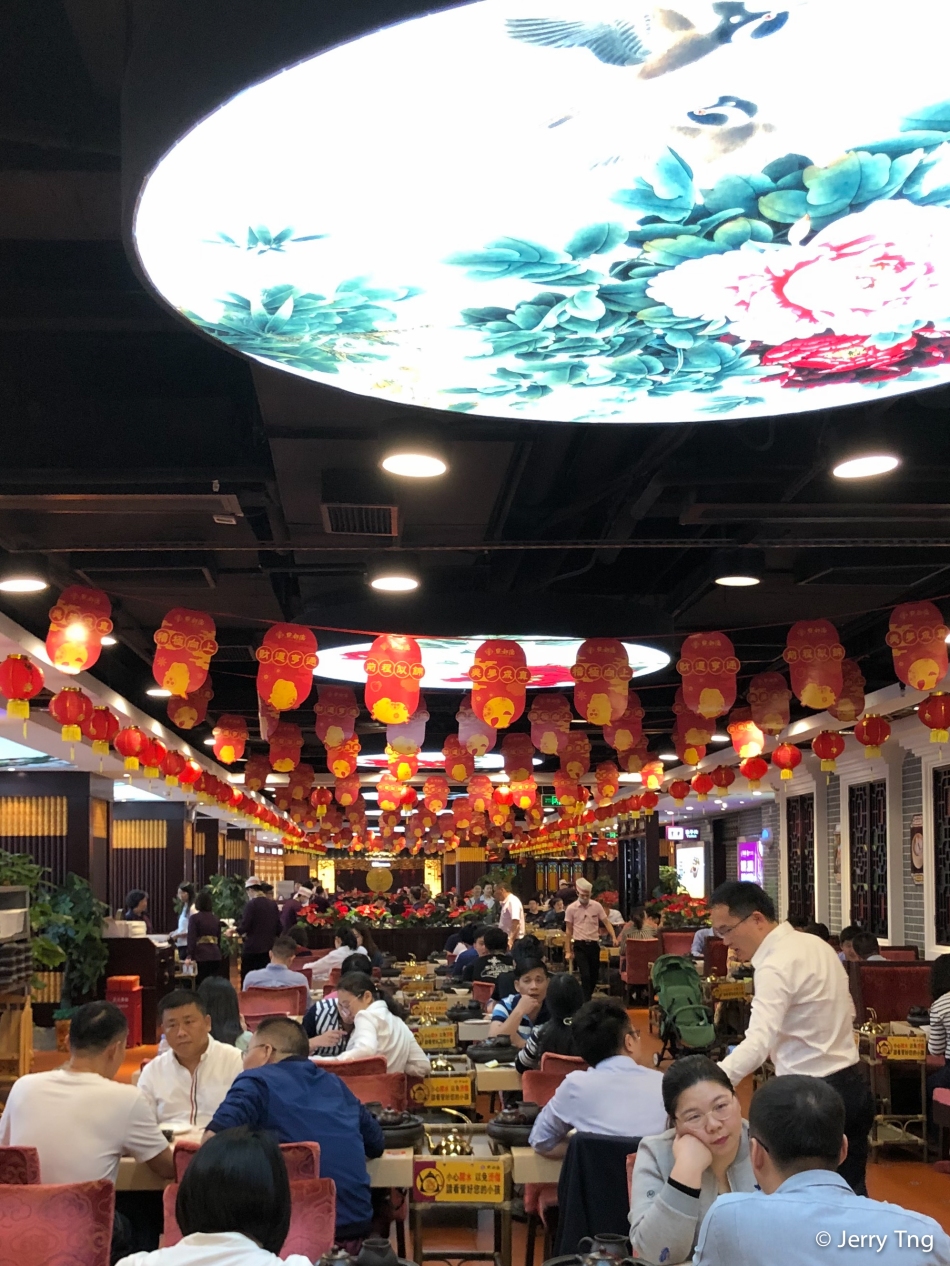 Supposedly founded in 1933, the latest iteration of this restaurant actually only began in 2013. So if you asked any Guangzhou folks, they would not list Diandoude as one of the bastions of the yum cha culture, despite what the marketing department claimed.

The Chinese characters 点都德 also sound like “Tim Tow Tuck” in Cantonese, which means “anything is possible”. I don’t know what the hype was about, with an amazing long queue at every location they opened at. The dim dum was above average but not exactly outstanding. Compared to Timhouwan, they had a lot of choices but less tasty.

Would be a good choice for yum cha, but definitely not one of the best though.

Diandoude 点都德
Several locations in Shenzhen, this one is a brand new branch next to Hilton Futian.