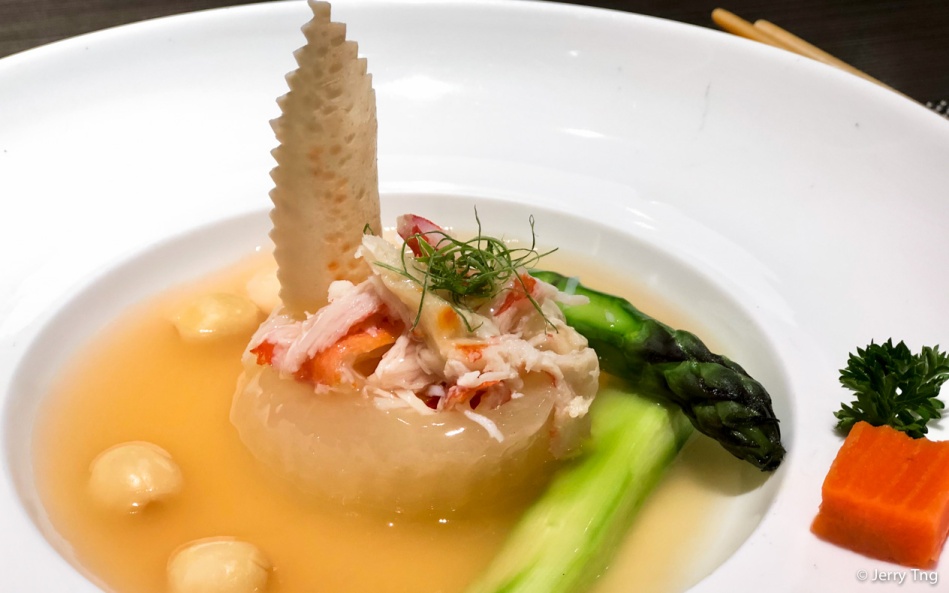 When it comes to fine dining in the Chinese culinary world, the one name that would always be on everyone’s list would be Sun Tung Lok. Every chef would mention Sun Tung Lok in bated breathe as they push the envelop of what Chinese haute-gourmet can be.

Sun Tung Lok is one of the bastion of Chinese fine-dining in the world, way before Michelin landed in Hong Kong. Founded in 1969 but the Yuan (Yuen) family in Hong Kong, they have been serving haute dining for the well-heeled in Hong Kong for 50 years.

NO, those are not cheap plastics chopstick, but the original ivory chopsticks with the classic Tung Lok imprints. Another relic from the pre-conversationist days.

There’s no amuse bouche, fancy appetisers or other French-influenced starters. Just a solid roast suckling pig stuffed with minced prawn between the skin and the meat. Despite reassembling minced prawn, there’s no added oil to fry. An excellent starter.

Another relic was the necessity to serve shark’s fin in every celebratory occasion. I do not order shark fins any more. But this was a treat, so it was impolite for me to deny the hosts to show their hospitality.

The shark’s fin soup was assembled by the table by the maître d’. A generous amount of shark fins and a superior stock was used. The soup was flavoured by copious amount of conpoy (dried scallops) and other savoury ingredients, boiled with old hens. The sticky collagen that was derived was all natural, and thickened only by that slighted of cornstarch.

There’s nothing needed for such course. While other provided bean sprouts, parsley and other condiments, they only provided a really good vinegar to accompany the soup. THat’s how confident they are with their shark’s fin soup.

Dried abalone is one of the most exquisite of all Chinese delicacies and is served without fail at any respectable banquet. In Chinese cuisine, dried foodstuff when cooked properly is often preferred to the fresh original and dried abalone is considered to be the King of Dried Seafood. That’s why the effort to cook dried abalone could take over a week. Compared to fresh abalone, dried abalone has a more intense flavour as well as a nicer tender texture to the bite.

The best quality dried abalone is from Japan, they are the ones that soften most easily with braising. The medium sized ones are from Yoshihama while the large ones are from Amidori. The size of dried abalone is measured in ‘heads’. This is the number of abalone in a catty (600g) and ranges from 6-30. The smaller the number, the bigger the abalone. The ones used tonight was 33 pieces to the catty, so they are considered quite small. You can “upgrade” the meal with larger ones, but you need to preorder because the larger ones (size 6) can go for HKD 14K per person!

The irony of such an expensive ingredient was that it was traditionally paired with the cheapest of all ingredients, the goose web. Like chicken feet, goose webs are not usually presented on a Western cuisine. But the goose web does not lend its taste nor disrupt the main star attraction, and yet provided the alternative texture to the soft and tender abalone while soaking up the rich, umami-laden sauce from the braising stock.

This course was my favourite. Sweet, umami-laden snow crab legs stuffed in loofah and smooched with a savoury chicken stock sauce. The crab meat was not overcooked and still sweet. The loofah has fully absorbed the flavour from the sauce and sweetness from the crab. The asparagus and lotus seeds provided the crunch and also alternative flavour profile to the uniform taste from the sauce.

Typically thicker than ramen or soba, udon has a distinct taste of its own. Not all udon is thick, though. There is one very popular type that hails from the tiny village of Inaniwa in Yuzawa city, Akita prefecture. Sato Yosuke Udon, also known as Inaniwa Udon, is one of the top three udon types in Japan.

Inaniwa udon is thinner and smoother than other ramen. It is hand-made every step of the way using techniques and ingredients passed down the Sato Yosuke family line for hundreds of years. In fact, the recipe was developed in 1665 and was only served to the Imperial family. In 1860 Inaniwa udon made its public appearance. Since then, it has remained firmly established as one of the best udon noodles in Japan.

At first, I thought it was E-Fu noodles that I was eating. But the Inaniwa udon was smoother than e-fu noodles with less bite and yet stayed the form despite the braising. The garoupa was a classic fish to serve in Chinese banquet due to its possible large size and tender, flavourful flesh. The caviar used was not the Russian type, but the purpose was to add to the texture and provide some umami, and not add to the price tag.

Puff pastry with a pink mousse (strawberry flavour) and scoop of bird’s nest. The glutinous ball was filled with salted egg custard. So the savoury custard and the sweet mousse were complimentary, and great ending to the hot dishes.

Last but not least, a selection of imported fruits were served with a shot of Kyoto grape juice. The grape juice was sweeter than the dessert. I wondered (silently) how many air miles were spent to assemble this collection of fruits.

Sun Tung Lok never fails to impress the hardest of gourmands. Their techniques were equivalent to the French, but still deeply rooted to the Cantonese traditions. You can find the traditions in every bite but still find innovations and fresh ideas here and there. That’s why Chinese chefs around the world still look to Tung Lok for inspirations.

They have never departed from using the finest (and most expensive) ingredients for their cooking. The preparation for some of these (like dried abalone) can be intense, others are not eco-friendly (like the fruit platter that has nothing local), and outrageously not right (like shark’s fin). But they pretend to be politically or environmentally correct, only palate correct.

It’s a wonder why other lesser restaurants got the 3 Stars nod, but not them in the first edition in 2009. They finally made it in 2011, but subsequently remained at 2 Stars. In my mind Sun Tung Lok is always a 3 Stars and better than Lung King Heen.