After a solemn visit to the different JFK sites, hungry. A unique and relaxing dining destination set in the award winning Klyde Warren Park. Located in the Arts District in the heart of Downtown Dallas.

With its sweeping views of Klyde Warren Park and the Dallas Arts District, this glass-encased jewel box is a spectacular dining destination, if only for the setting alone. But there’s more to Savor than what meets the eyes. Seasonally inspired dishes, ranging from lobster and Comté cheese fritters to braised short ribs with smoked pecan gremolata– are surefire stunners, too. So are the desserts. Make your way through everything from deconstructed Key lime tarts to decadent sundaes and cakes. There’s also an interesting selection of craft beers, wine, plus a slew of delicious cocktail concoctions. And the awesome outdoor seating area, complete with misters and fire pits, is yet another reason to visit. Portions are generous, so for the best value, come with friends who like to share.

Shishitos are an interesting pepper because when you eat them you play a game of Russian roulette: one in ten peppers are spicy and the rest are sweet. But by putting the blistered shishito over the onion rings has made them rings soggy.

There ain’t no chicken in chicken fried steak!

Chicken fried steak, also known as country-fried steak, is an American breaded cutlet dish consisting of a piece of beefsteak coated with seasoned flour and pan-fried. It is breaded and fried with a technique similar to the more common fried chicken, hence “chicken fried.”

Chicken fried steak is prepared by taking a thin cut of beefsteak and tenderizing it by pounding, cubing, or forking. It is then immersed in egg batter and dredged in flour to which salt, pepper, and often other seasonings have been added (called breading). Chicken fried steak is typically deep-fried and served with a cream gravy, while country fried steak is typically fried in a skillet and served with a brown gravy. The frying medium has traditionally been shortening, but butter and lard have sometimes been used instead. 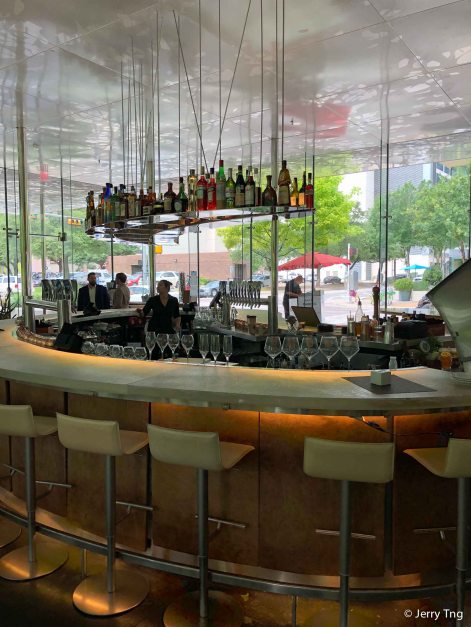 When you dine anywhere in Savor, you’re surrounded by the beauty of Downtown Dallas. The kitchen and back of the house are in the middle of the restaurant and divide the space into two areas. In the front, a kidney-shaped bar overlooks a large patio with couches and a firepit. The bar top is almost transparent and backlit with soft white lighting.