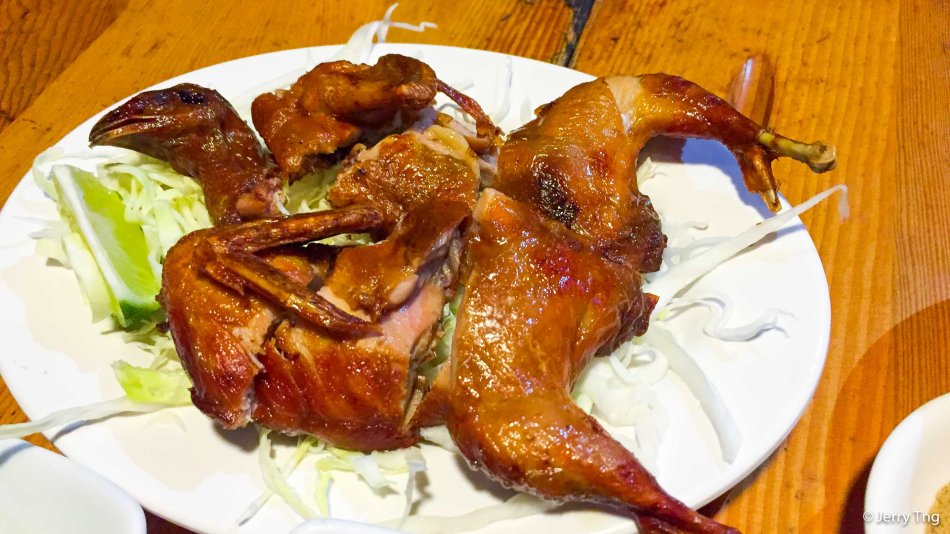 Lafung is A-Mei language for “guests” and this aborigines restaurant in Taipei welcomes all guests from all races.

Many celebrities opened restaurants as a secondary source of income. But most of these were just 掛名 “hanging their names” on the signboard – i.e. making use of their celebrity status to lure the fans. Very often the food was blah. 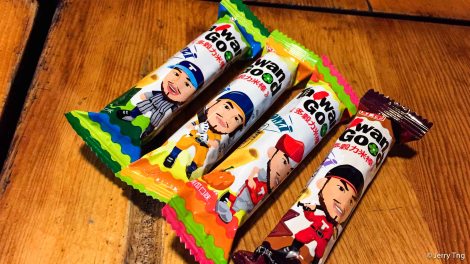 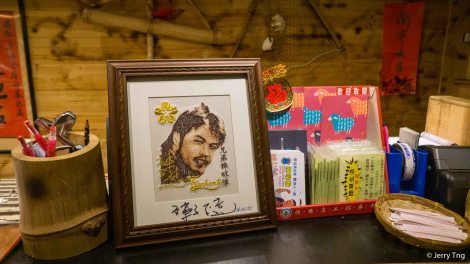 The owner Talukus Mayaw (Chinese name: 陳致遠 Chen Tsih-yuan) of Lafung was the baseball with the Brothers Elephants team in Taiwan – think of him as the LeBron of Taiwanese baseball. He represented Taiwan in many international baseball competitions and has many fans. He married a local TV celebrity and retired from professional sports (indicted for match-fixing), and the star couples appeared on TV frequently. Recipe for success right? So they opened their indigenous restaurant.

Who are the Amis?

The Amis (阿美族) are the largest Austronesian ethnic group native 原住名 to Taiwan. They speak Amis and are one of the sixteen officially recognized groups of Taiwanese aborigines. The traditional territory of the Amis includes the long, narrow valley between the Central Mountains and the Coastal Mountains (Huatung Valley), the Pacific coastal plain eastern to the Coastal Mountains and the Hengchun Peninsula. The Amis are primarily fishermen due to their coastal location.

Indigenous people of Taiwan were traditional hunter/gatherer, so a lot of their cuisines feature games from the mountains like wild quails, wild boar, etc. Some tribes along the coast or islands will feature seafood, but they were gathered in comparison to being fished, so you get things like shellfish, crustaceans and fishes like flying fish.

One common impression of indigenous people was their fondness to alcoholic drinks. They produce a moonshine that is really potent and dished out in abundance during their festivities. So the first impressions for their cuisines were usually formed around the drinking food 下酒菜.

涼拌山豬皮 wild boar skin was crunchy and tasteless, like chewing leather. The taste came from the garlic, celery, chilli and peanuts with white vinegar and sesame oil. Allergen alert!

Nostoc, genus of blue-green algae with cells arranged in beadlike chains that are grouped together in a gelatinous mass. Ranging from microscopic to walnut-sized, masses of Nostoc may be found on soil and floating in quiet water. Reproduction is by fragmentation. A special thick-walled cell (akinete) has the ability to withstand desiccation for long periods of time. After 70 years of dry storage, the akinete of one species germinates into a filament when moistened. Like most blue-green algae, Nostoc contains two pigments, blue phycocyanin and red phycoerythrin, as well as chlorophyll, and has the ability to fix nitrogen in specialized cells called heterocysts. A terrestrial species has been used as a supplementary food source in Asia. (Source: Encyclopaedia Britannica)

OK, 情人的眼淚 nostoc omelette doesn’t sound appetising, but this algae is full of nutrients, Almost like black wood fungus but slimier, it has a seaweed taste and pretty good with the salted egg.

Indigenous people know how to make sausages – they usually use ingredients that are uncommon. 飛魚卵香腸 sausage with flying fish roe was salty, bits of tobiko in the filling popped with umami.

阿美石燒蝦 Ami stone cooked prawns is one of their signature dish. Really hot stones are thrown into a boiling stock to spike the temperature while fresh tiger prawns are added into the bubbling hot stock. The burst of heat was just enough to cook the prawns ala minute. The result is a sweet and crunchy prawn with an interesting soup to accompany the prawns. Just look out for the pebbles. 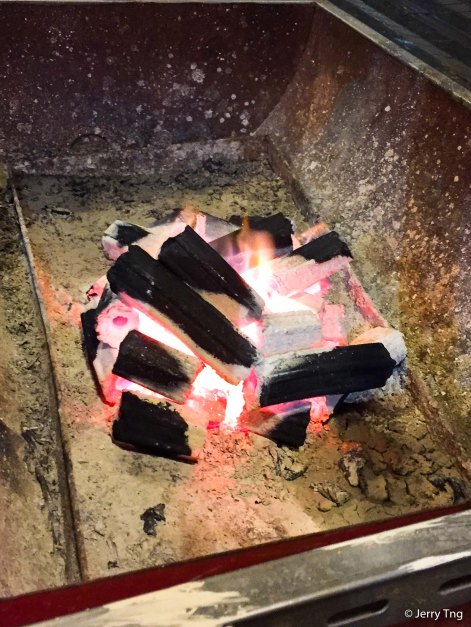 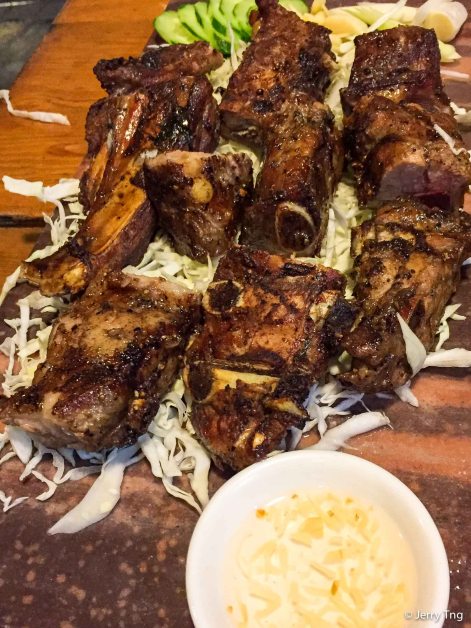 What’s Ami food without BBQ? 燒烤山豬排 grilled mountain pork ribs were rather dry. Heavily salted and spiced with mountain peppercorns, it was tasty but the meat was too dry.

These are wild quails that can be found in the forest of Alishan. 烤班甲 grilled quail was tender and moist, but rather skinny.

I learn a new thing everyday and today is 龍鬚菜 or Chinese asparagus. I have had this vegetable in Singapore, it was commonly found when I was much younger. This is not planted en masse, but gathered in the wild. With less and less open forage, you don’t see them very often now. Very difficult to get a good plate of Chinese asparagus, as they aged very quickly and then they become very fibrous.

During the Japanese colonial era, because Japan was engaged in World War II, there’s an acute need to increase food and medical supplies. The seeds of fireweed were spread by planes throughout Taiwan. The mature fruits of fireweed were like daffodils, seeds fluttered in the wind, spreading everywhere. As the soil in Taiwan was extremely fertile,  countryside areas below 2500 meters above sea level was clusters of fireweed.

The young leaves and stems or seedlings that have just sprouted after harvest are edible. Fireweed is also diuretic, antihypertensive and anti-inflammatory. Aboriginal people in Taiwan called fireweed “airplane vegetable” 飛機菜, after Japanese planes sprinkled seeds. Due to the easy access to seeds, it has been cultivated on an economic scale and has a high yield.

And it tasted like crown daisy 茼蒿 so it can be replaced during the Chinese New Year period for the ever elusive crown daisy. Wonder why it wasn’t?

This is what the Italians called the il primo. But we do not serve the first as we see them as fillers, the heaviest course of the evening. 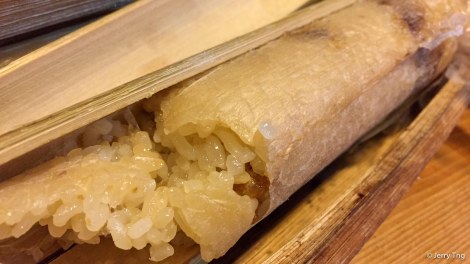 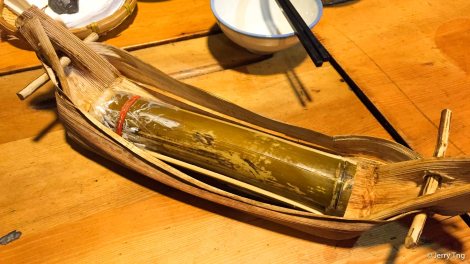 竹筒飯 bamboo rice is a typical indigenous food sold everywhere. It’s a mix of normal rice and glutinous rice, mixed with Chinese (Ami 🙂 ) sausage and steamed in the bamboo canister. It leaves a nice bamboo fragrance to the end result.

阿美豬油拌飯 Ami rice with pork lard was stretching it too much. This is not Ami but Hakka, but still it was a really nice bowl of rice – the soy sauce and the glistening pork lard, delicious. 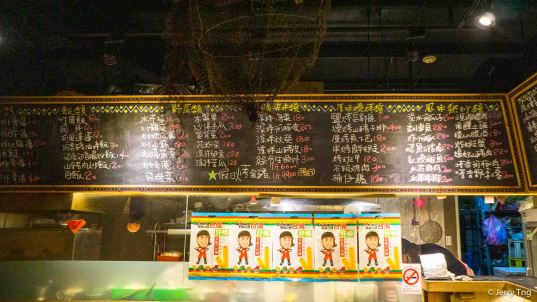 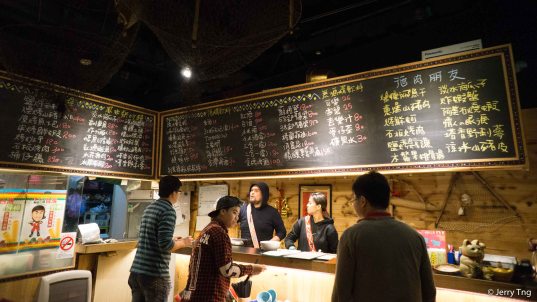 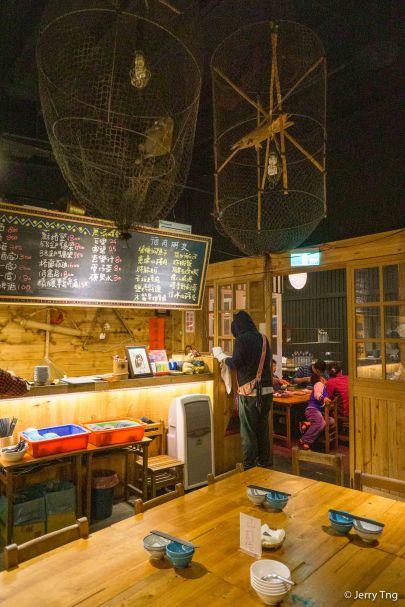 You must be wondering, this wasn’t a really enthusiastic post. I didn’t really enjoy this dinner. Most of the dishes were quite strange to me, and trust me I had my fair share of strange things. It was the spices used, some mountain peppercorns and other aromatics that were unfamiliar, you need some getting used to. 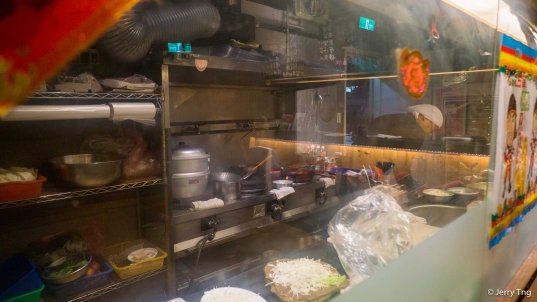 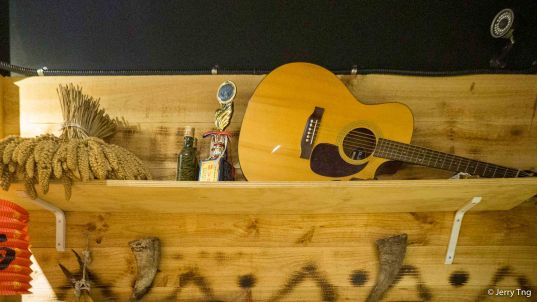 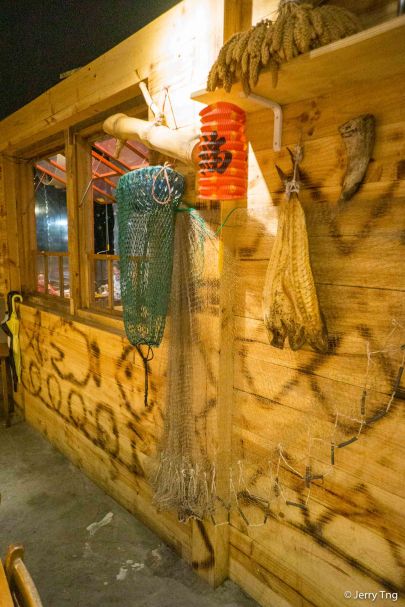 Also, we were only 3 persons, and the staff taking the order did not even suggest that we ordered too much. But that little glitch did not hide their genuine service – Taiwanese are generally very bubbly and hospitable.

Recommended for its authenticity if you have not tried Taiwanese indigenous cuisine. 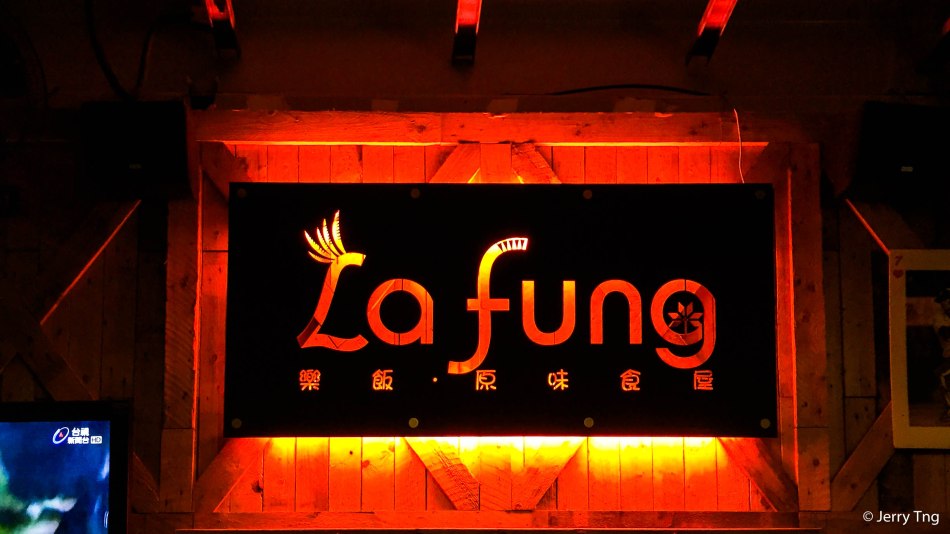 Closed in 2018 – another “authentic” restaurant bites the dust. It is difficult when you cater to only a small cross-section of the population.