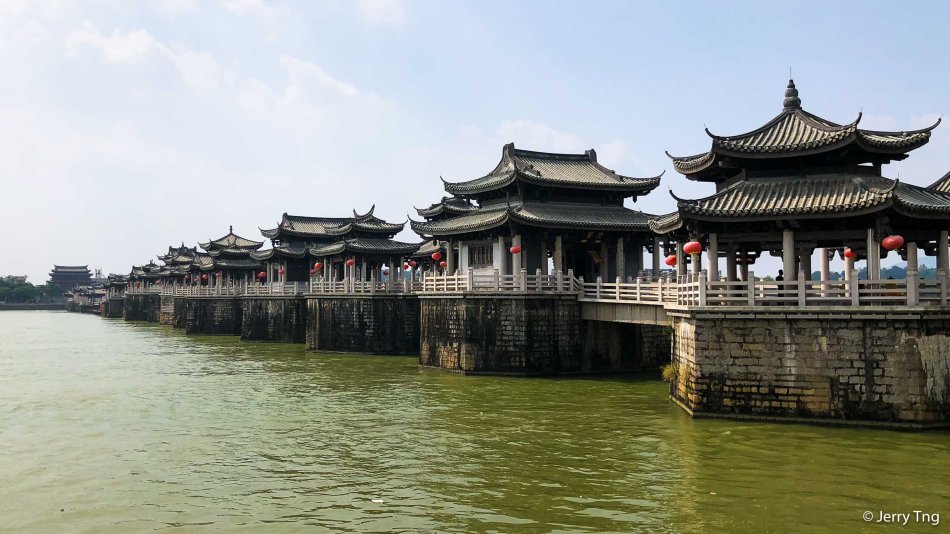 In the final part of the my three part story about my root searching trip to Chaozhou, we visit Guangji Bridge, the bridge that witnessed the rise and fall of Chouzhou for almost a thousand years.

There is an old saying, “到潮不到橋，枉向潮州走一遭”, that means if you go to Chaozhou without visiting the Guangji Bridge, you cannot say that you have been to Chaozhou.

Guangji Bridge in Chaozhou, along with Zhaozhou Bridge in Hebei Province, Luoyang Bridge in Fujian Province and Lugou Bridge in Beijing, are considered the four most famous bridges in ancient China.

On one side of the bridge is a stone tablet inscribed with four Chinese characters that read: Flood Stops Here. Legend says that the inscription was written by Han Xiangzi, one of the Eight Immortals. Therefore, the bridge also has another name, Xiangzi Bridge 湘子橋.

There are various pavilions on the bridge, so there is a popular saying, “twenty-four pavilions have twenty-four styles”. The pavilions housed businesses and business was prosperous, so people said, “There’s a mile of business for every mile of bridge.”. An English photographer, John Thompson took a photo of the prosperity and commented that it was similar to the old London Bridge where paddlers did a roaring trade on it.

Layers of granites joined together with rivets and tenons form 24 large and small piers. The piers are precious relics of Chinese architecture. The middle section of the bridge was rebuilt to be supported by 18 shuttle boats that allowed the structure to open and close. It is the first big stone bridge in China to be equipped with such a feature.

In 1958, the shuttle boats were dismantled due to traffic needs and a straight bridge was rebuilt in its place. The iron ox you see in the photo was a replacement. Two iron oxen were placed on both ends of the pontoon bridge in 1723, which are now lost. One was lost due to flooding in 1842. Hence the saying, “One of the oxen ran away.” The other was melted down for “The Great Leap Forward” during the Cultural Revolution. A new iron ox was mounted on the bridge in 1980 to replace the melted oxen.

In 2003, rebuilding of the bridge to its original plans began. In 2007, construction completed. In 2009, Guangji Bridge was re-opened. 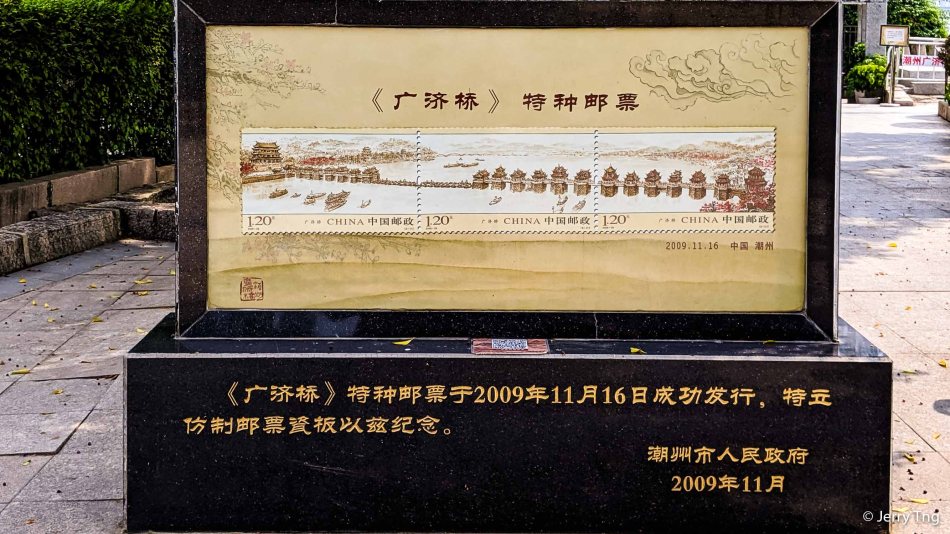 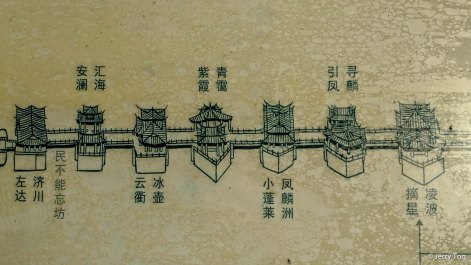 Guangji Bridge is a floating beam combination structure, which is composed of the east and west section of the stone beam bridge and the middle section of the floating bridge. The beam bridge is composed of a pier, a stone beam and a bridge pavilion. The Guangji Bridge is 518 meters long, with a 283.35-meter beam bridge in the east, 12 piers and a bridge abutment, and 12 bridge holes; a 137.3-meter west bridge, 8 piers, 7 bridge holes, and 5-meter wide stone bridges. The middle pontoon is 97.3 meters long and is connected by eighteen wooden boats.

The bridge pier is made of Hanshan’s large green hemp slabs of different sizes, and the slabs are superposed regularly. There is no ash between the stones, and all are tenoned. Because the bridge pier was damaged successively, the repair period was different, and it was not repaired according to the original specifications. Therefore, the bridge pier has different heights and different shapes. The piers of the Guangji Bridge have two types of shapes, one is a hexagonal ship type pier, and the other is a five-sided half ship type pier. All the bridge piers are made into a sharp shape upstream, which effectively decomposes the impact of runoff.

The Guangji Bridge has four huge stone beams per span, the largest is about 15 meters long, 1 meter wide, 1.2 meters thick, and weighs about 50 tons. The smallest is about 12 meters long, 1 meter wide and 0.8 meters thick. For more than 100 years during the initial period, the bridge of Guangji Bridge was made of wood. It was changed to a stone beam only in the third year of Yuan Taiding (AD 1326). Limited by the nature of the girder material, the piers of Guangji Bridge are very dense. The maximum distance between the two piers is 13.45 meters, and the smallest is only 5.9 meters.

The pontoon bridge is formed by eighteen wooden boats connected horizontally side by side, with a length of 14 meters and a width of 3.6 meters, and planks are laid in the center of the boat as a bridge deck. The pontoon bridge deck is 5 meters wide, with a hull of about 5 meters long on each side of the bridge deck. The two ends of the pontoon bridge are fixed to the rocky pier of the beam bridge with iron chains, and the height changes with the fluctuation of the water level. There is a stone staircase at Itotou Pier for pedestrians to get on and off the pontoon. The pontoon can be opened and closed, and the bridge can be connected to the two-sided beam bridge, which can be opened for large ships and fast flood drainage.

The shape of the railing of Guangji Bridge is simple. The beam bridge is a common horizontal strip stone railing, with vertical columns and horizontal handrails. The pontoon part is a wooden railing, which is separated by sections and then connected by iron chains. Each section is composed of six vertical columns and two horizontal handrails. The railing is located between the two boats, which also protects the two boats while protecting it. The four horizontal bars of the stone railing are small square stone bars, of which the first, second and fourth bars are placed on the front, and the third bar is placed on the side and becomes a prismatic bar.

The decoration of the bridge is focused on auspicious meaning. The engravings are traditional auspicious patterns, such as Ruyi pattern, lotus flower, plum blossoms and bamboo. The stone carving decoration is mainly on the pillars of the railings of the beam bridge. Woodcarving decoration is concentrated on the wooden roof and doors and windows of the bridge pavilion. Beams, stigmas, algae, eaves, bird stands, arches, plaques under the eaves, and fans of doors and windows are the main parts of woodcarving. The carving techniques include round carving, through carving, bas relief, deep relief, and line carving. 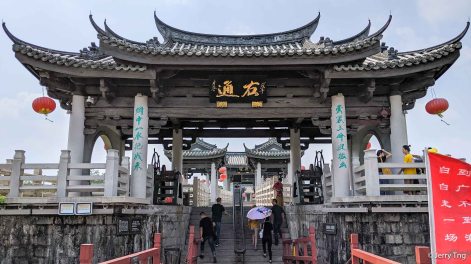 Plaques on the Guangji Bridge are placed on the central axis of the bridge, with gold characters on a black background; The plaque is suspended in the middle of the front of the pavilion, and the couplets are engraved directly on the white granite pillars.

There were two copper oxen on the Guangji Bridge, located separately at the east and west beam bridges. One was washed away by the flood and the whereabouts were unknown. At present, there is an iron ox on the eighth pier of the West Bridge. The ox of Guangji Bridge is an important part of the Guangji Bridge. Floods on the Han River are frequent and the bridge is repeatedly damaged. The ox is put in place to reduce the probability of flooding.

Every thrid month of the Lunar Calendar, there are massive tidal swells that will raise the pontoons to the same level as the piers, forming a straight line that looked like a dragon.

When Han Yu, a famous poet in the history of China, came to Chaozhou, he always climbed the Bijia mountain (now called Han Mountain). From the top of the mountain, he saw the river and the difficulty of crossing it, so he asked his nephew Han Xiangzi and a monk Guangji to build a bridge. Han Xiangzi built the east bridge. He invited eight fairies（八仙）to help him. Han Xiangzi himself climbed Fenghuang Mountain, in Chaozhou, for stones. He changed the stones into black pigs and chased them to the bridge. On the way, a woman cast a spell so the pigs changed back into the stones, which could not move. Consequently, several piers in the east were not built. In order to commemorate this, people named it Xiangzi Bridge.

Guangji the monk invited eighteen arhats to help him build the bridge in the west. He went on Sanpu Mountain to get stones. He changed the stones into cattle and sheep and chased them back. On the way, he met an evil landlord who tried to stop him and get his cattle and sheep. Guangji lost some cattle, so part of the bridge was not built. He Xiangu, a female fairy, dropped a lotus petal onto the river and changed it into 18 boats connecting the bridge. Guangji raised his cane and created chains to connect the boats together.

Wu Jun was Governor of Chaozhou during the Dao Guang (1820-1850) and Xian Feng (1850-1861) years of the Qing Dynasty. One year, the river was flooded by the Han River and the city was in critical condition. His official hat and uniform were thrown into the water, indicating that he will coexist with the city in life and death. Strange to say, the flood receded at this time. Since then, people have set up his idol sacrifice in the Dongmen Tower, and built an archway “the people must not forget” in the east bridge of Xiangzi Bridge.

Great changes have also taken place in the Xiangziqiao area. In recent years, the Chaozhou Municipal Government has used the Hanjiang Water Conservancy Project to connect the 6-kilometer-long ancient city wall, the Guangjimen Tower, and the Xiangzi Bridge, forming a large scenic area.