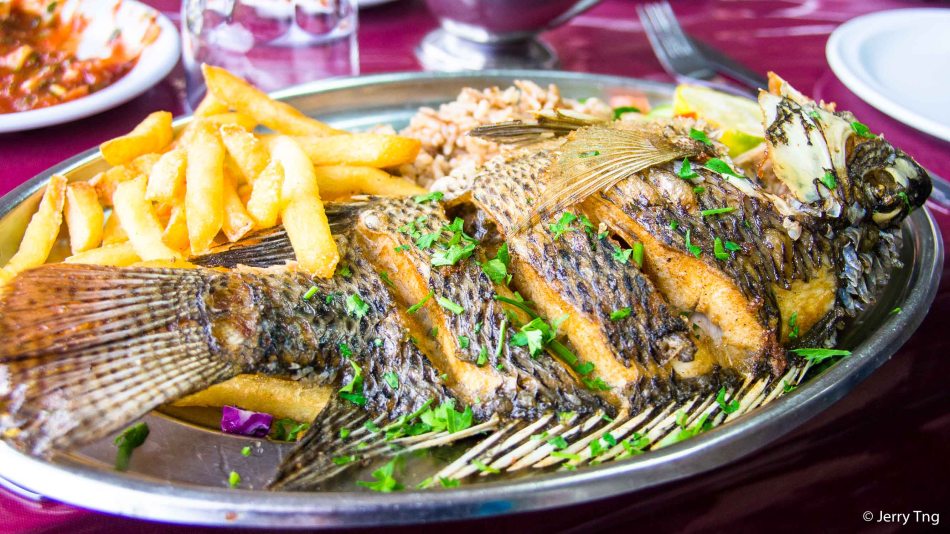 During my trip to the Holy Land, I came across this term – St Peter’s fish. On my way to Galilee, I asked my guide what it is. He could not describe the species of fish used and so we decided to go to his favourite fish place along the way to Galilee for me to try it.

Every year, thousands of Christian pilgrims flock to the Sea of Galilee to explore the towns where Jesus spent his life—where he gave the Sermon on the Mount, the synagogues where he taught and preached, the site of the miracles of the loaves and fishes and walking on water. Even today, those visitors face the problem that all tourists have faced in human history: What should we have for lunch?

St Peter and the fish

If you would turn with me to the Bible to Luke Chapter 5, it would give you the first encounter of Jesus and Simon, also called Peter, who was a fisherman in the Sea of Galilee. Jesus boarded one of the fishing boats pulled up along the coast, one belong to Simon Peter, and asked him to pull out into the waters.

“When he had finished speaking, he said to Simon, ‘Put out into deep water, and let down the nets for a catch.’ Simon answered, ‘Master, we’ve worked hard all night and haven’t caught anything. But because you say so, I will let down the nets. When they had done so, they caught such a large number of fish that their nets began to break. So they signalled to their partners in the other boat to come and help them, and they came and filled both boats so full that they began to sink.” – Luke 5:4-7 (NIV)

So what’s this fish that Peter caught? Tilapia, or at least according to legend, convenient for the tourism industry because the fish is found in abundance in the waters around here and can be bred easily. A few tilapia species (Sarotherodon galilaeus, Oreochromis aureus, Coptodon zillii and Tristramella) are found in the Sea of Galilee. It is also commonly found in many places, and in Singapore where sea fish is abundant, we usually do not eat this freshwater fish because it can be quite muddy in taste. If really we eat this, it would be cooked with chilli or deep fried – I think I know how they would do it.

According to Christian tradition, Peter was crucified in Rome under Emperor Nero. He is traditionally counted as the first pope‍, ‌and also by Eastern Christian tradition as the first patriarch of Antioch. The ancient Christian churches all venerate Peter as a major saint and as the founder of the Church of Antioch and the Diocese of Rome, but differ in their attitudes regarding the authority of his successors. According to Catholic teaching, in Matthew 16:18 Jesus promised Peter a special position in the Church. Regardless, Christ built a church on the foundations of His ministry on earth, and may the catch be like St Peter’s fish.

As you come out from your trip to Sea of Galilee, you will come to a junction that has a big sign that says “Migdal” which is Magdala or Magdalene in Hebrew. If you are familiar with Bible stories or Da Vinci Code, you would know this character Mary Magdalene, or more correctly, Mary from Magdalene. 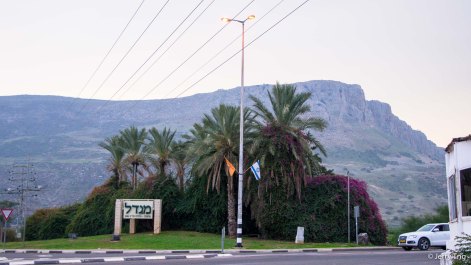 Junction with the sign of the town of Migdal 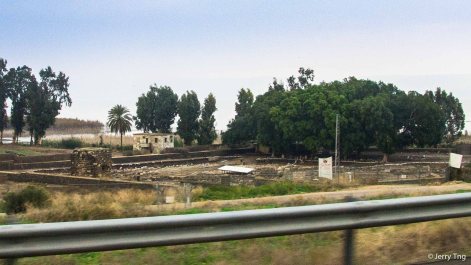 A ruins of a synagogue that has existed during Jesus’ time

The significant sights of Magdala include a 1st century fishing boat swept up miraculously in 1980s along the coast of Sea of Galilee, and a recently excavated site which contained the ruins of a 1st century synagogue as well as the old town market of Migdal. We drove past it, but I recently read that it has been developed to a tourist attraction for the area because of the significance and possible connection with Sermon of the Mount (which was the hill behind).

Looks can really fool you – what is this lousy place we are getting into? A tourist trap? Even after the renovation, the restaurant looks like an architectural mistake. Floor tiles from the 1970’s, and toilets in a caravan. No wonder only those who know will enter.

And if you decided to enter, you would be treated to a fantastic meal. The mezze – the salads – were all freshly prepared and generously given to you as part of the meal. You just need to order the main course. And the Galilean-style hummus was freshly prepared and drizzled with a lot of delicious EVOO and piled with boiled chickpeas. You would be surprised by the freshness of everything because I was the only table at meal time, and it did not come to me as the gourmet destination. But my guide explained that Israelis eat really late.

The shores of the Galilee are dotted with restaurants offering St. Peter’s Fish, usually to tourists hitting the area’s Christian sites. They serve the fish whole, head and all, and either grilled or fried, with a side of lemon. The fried version seem to be slightly preferred in reviews, though grilled may be more biblically authentic. It’s a genuinely brilliant marketing job, using the gospel association and a canny name to boost sales of an otherwise generic, lightly flavored fish.

I wasn’t expecting much when I saw the fried tilapia being presented to me. But it was the best tasting fried tilapia I have ever tasted. The skin was crispy, the fresh was tender and moist, and best of all, it did not have that muddy taste that I have come to associate with tilapia. Served a side of shoestring fries (thank goodness, I have had 10 days of mezze and pitas, I was yearning for something familiar) and some boiled brown rice dressed with lemon (God answered mysterious silent prayers).

With Turkish coffee to help it all down, I must say there was plenty of food and I was presented with some locally grown sweet brown palm date. I have never tasted fresh dates before this and they were delicious that got me craving for it ever since.

A couple of very friendly Jewish brothers run the place. I was their first Singaporean customer. Dalia’s delivers an excellent meal when travelling in the north. If only they could re-build the place with modern comfort.

But at least they have WiFi.

0 comments on “In search of St Peter’s fish”