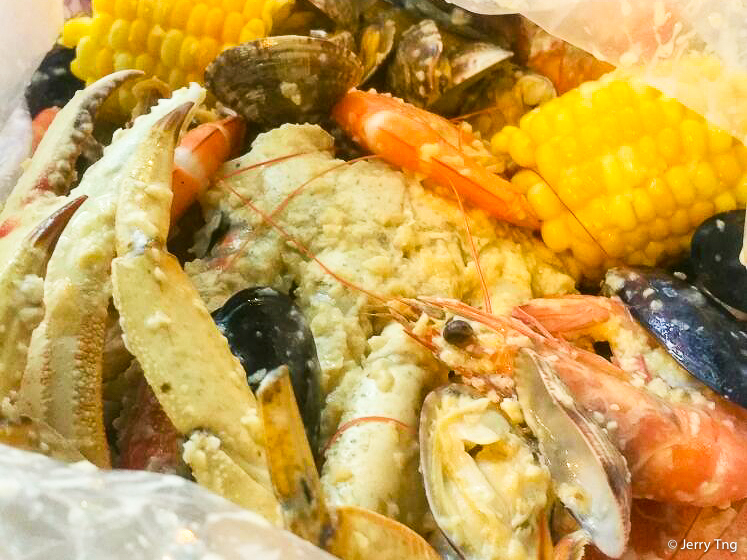 I wanted the family to try something different this weekend and so we went for a Louisiana Boil lunch. Time to get messy!

Opened in 2014 in Tai Seng by ex banker turned restauranteur Malcom Hong,  the Boiler is a Southern-inspired seafood joint that serves up fresh seafood in Cajun style known as seafood boil. It is located about a 5-minute walk away from Tai Seng MRT, nestled amongst the construction and industrial sites. We thought we were lost while trying to make our way there because it seemed almost impossible to have an eatery in that area. We were actually genuinely surprised when we saw that there were quite a number of people in the restaurant.

The Boiler is very different from the surrounding industrial park. There is a certain charm about it: the cement floor, the brick wall, the high ceiling,  the French windows. It’s lovely. The interior is minimally decorated, giving it a sleek and somewhat industrial appearance as The Boiler turns the spotlight on the food. 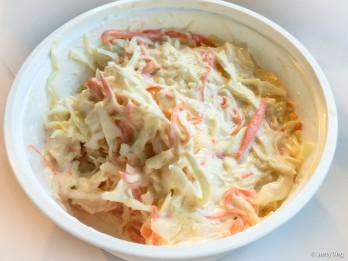 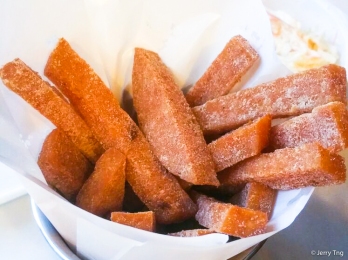 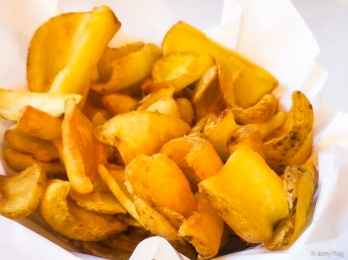 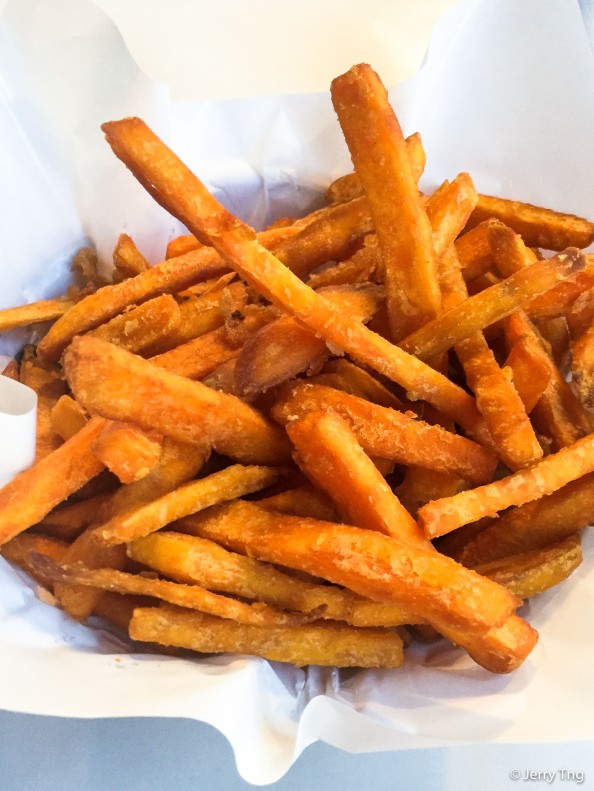 I thought that the serving was not too bad for its price! Taste wise, it’s rather average, nothing to shout about, but if you’re a fan of sweet potato fries, there’s no harm in getting this to curb those cravings!

The must-order here is the traditional Cajun seafood boil, which they call the Bombdiggity Bag. 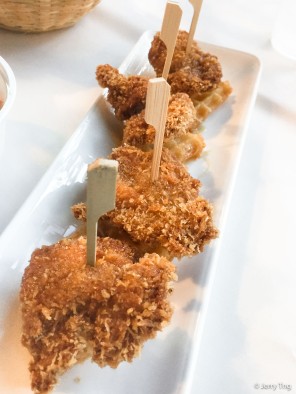 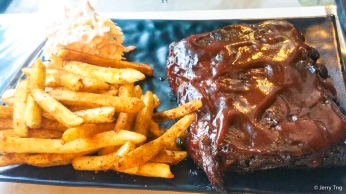 Baby back ribs with cajun fries 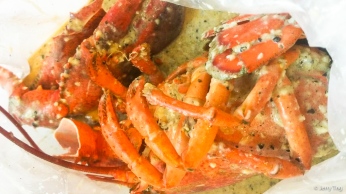 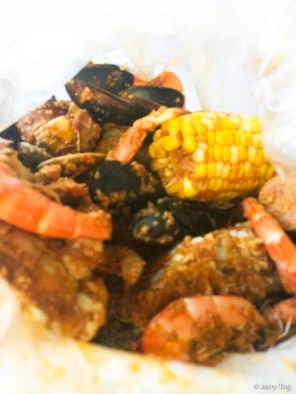 Cajun Boneless Crispy Chicken on pancakes – how Southern can you get with pancake and fried chicken. The first time I had this combination of Southern fried chicken and pancake was at The Bird. They have made this into a starter portions with a piece of boneless thigh meat on pancake. The chicken was delicious. The pancake wasn’t.

Hand-rubbed baby back ribs with The Boiler’s secret blend of special spices and slathered with mildly-spiced Hickory smoked BBQ sauce, served with Cajun fries and coleslaw. Dried out ribs with a sugary sauce. I should have know.

Bombdiggity Bag with the Works – Dungeness, prawns, mussels, clams, smoked sausages, sweet pearl corns & buns. Bombdiggity bag is overpriced. It’s only slightly bigger than the Duo bag, but has a dungeness crab. I am not a fan of the dungeness crab because it is not really meaty. The rest of the bag consists prawns, mussels, clams, sausages, and pearl corn.

Boston Lobster with garlic butter sauce – an overcooked lobster with a mild combination of garlic cream, chicken broth, and butter. Should have stick to the Works.

Small as the portions are, the seafood is really fresh. The Works sauce is magical too; it’s slightly spicy with a pungent herb that is very delicious; you need to use a bun to wipe the sauce or you’ll regret it for the rest of your life. 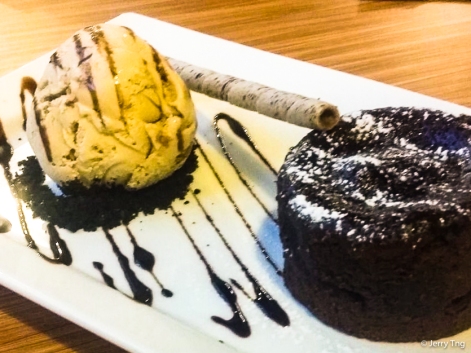 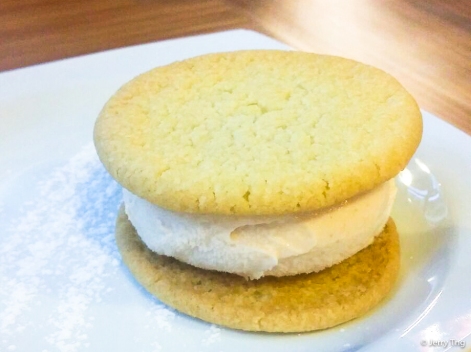 Chocolate Molten Lava Cake – Dark chocolate lava cake served with a scoop of ice-cream and wafer. The desserts are OK and look like they are from a commercial confectionary. Anyway we are here for the seafood boil, not the dessert. There’s also the kid’s special dessert of a scoop of vanilla ice cream between two butter cookies. I like that. 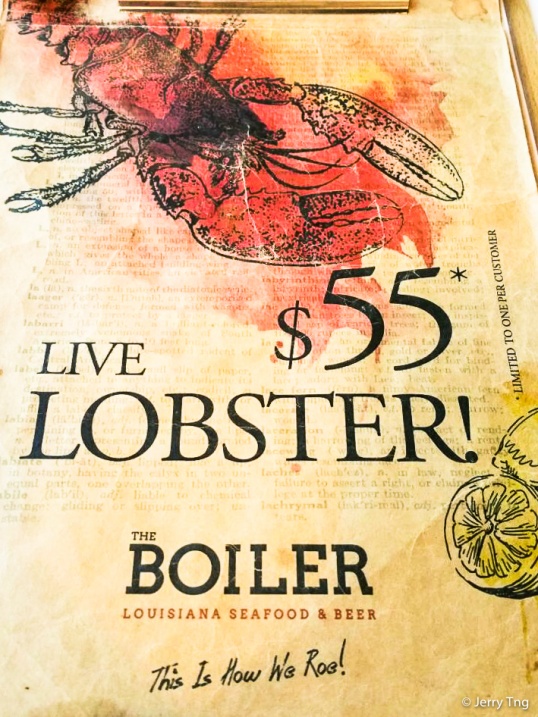 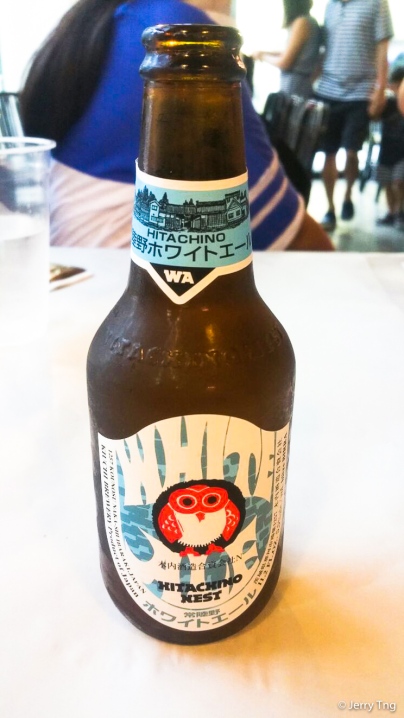 If you’re on the hunt for fresh seafood in a casual and comfortable setting, look no further – The Boiler ticks all the boxes on the list for a perfect seafood feast. The staff were polite and co-operative, even letting me pester them for water refills. I wouldn’t recommend that, as the I am as firm believer in the age old adage “Never argue with the waiter if you’d like your food edible”.