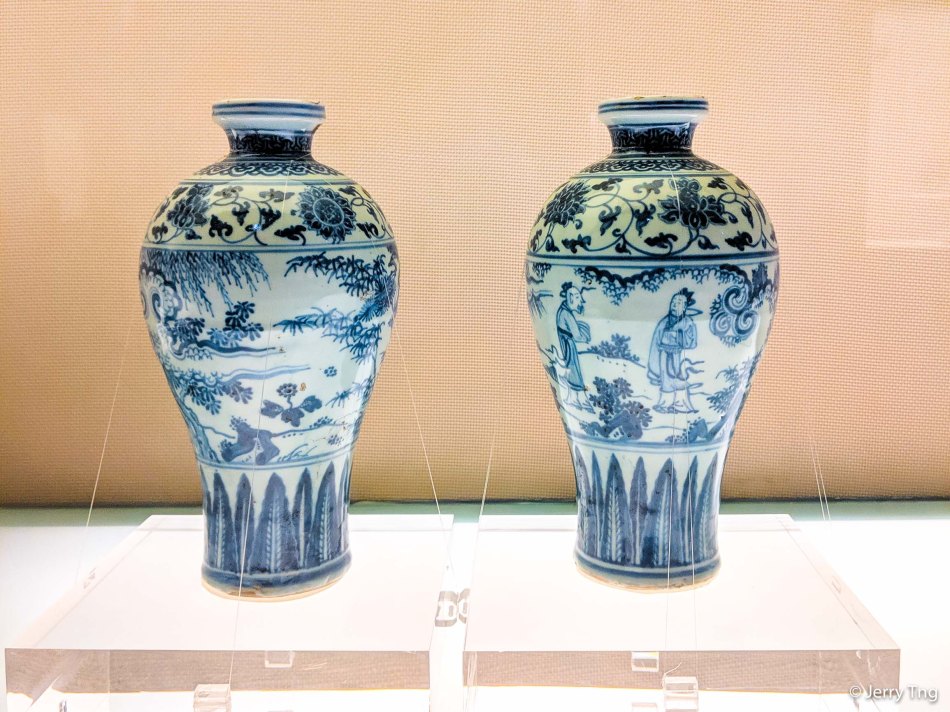 The Qing Dynasty is a period specially noted for the production of color glazes. In the area of monochromes, Qing potters succeeded in reproducing most of the famous glaze colors found in ceramic wares of the Song, Yuan and Ming Dynasties. In addition, they created a variety of new glazes, thus bringing vibrant energy to Chinese porcelain and art.

The porcelain of the Ming Dynasty (1368-1644) benefitted, as did other arts, from the economic success of the 15th century CE, in particular, and the consequent surge in demand for quality handcraft production both at home and abroad. The Ming dynasty is rightly famous for its fine ceramics and especially the cobalt blue-and-white porcelain produced in such towns as Jingdezhen in Jiangxi province. Still highly prized by collectors today, Ming porcelain would have a major influence on the ceramics of many other countries from Japan to Britain.

An important development in Chinese ceramics was the habit of adding Ming imperial reign dates to wares, something not at all common in the ceramics of previous Chinese dynasties. By the 16th century CE, it was becoming common for artists to sign their ceramics, too, something which could greatly affect their price; such was the reputation of some artists.

In the first period of Ming rule blue-and-white porcelain was the most highly prized, as it had been under the Mongol rulers of the Yuan Dynasty (1215-1368). The blue (cobalt oxide sourced from central Asia, particularly Iran) was painted onto the porcelain body and then covered with a glaze called Yingqing 影青.

As the Ming dynasty wore on, porcelain decoration became much more elaborate, again perhaps in response to foreign demand, especially in Japan and Europe. Porcelain became a major export, along with such goods as silk and lacquerware, and was exchanged, in particular, for Spanish silver which came from the Americas via Manila. The designs by the 16th century CE, then, included multi-coloured scenes using red, blue, yellow, and greens, often with human figures in intricate robes.

Popular subjects for decoration included stylised flowers, grapes, waves, lotus scrolls, vine scrolls, reeds, fruit sprays, and other motifs commonly used in paintings and textiles. These motifs are usually restricted to the borders of wares. Scenes with fish or birds, including songbirds and herons but also seemingly less elegant ones like geese and chickens (particularly common on small wine cups), were prevalent. Landscapes were another subject matter borrowed from painting. Mythical creatures were popular, especially the dragon, symbolic of good fortune in Chinese culture. Another popular theme was the combination of pines, plum trees, and bamboo, known as the ‘Three Friends of the Cold Season’. As the Ming Dynasty progressed, ceramic artists favoured a greater naturalism in their designs.

During the 18th century, the Chinese ceramics industry, which was once again under stringent imperial control, was noted for the perfection of its porcelain bodies and for the development of new techniques for their decoration. From 1644 to 1912, China was under the control of the Manchus, a people of northeastern Central Asian origins, who had conquered the Han-Chinese Ming empire. Known as the Qing dynasty, the period of Manchu rule was one of relative peace and economic prosperity. It was also a time of close ties with Europe: Chinese porcelains were traded in increasing numbers to different nations in Europe, helping to spur changes in the ceramic industry in the West.

The Qing rulers were avid patrons of the arts, which flourished in many forms during their reign. In 1677, Emperor Kangxi (reigned 1662-1722) rebuilt the imperial kilns and factories at Jingdezhen, which had been destroyed during the fighting that had led to the establishment of the dynasty, and in 1683 the production of imperial ceramics was resumed.

This set of flower cups have twelve ones representing the twelve months. All of them have a thin body with a wide top, an outward curve rim, a deep abdomen, and a ring foot.

The cups also have different blue glazed inscriptions on the outsides and inscription of Chinese characters on the bottom.

The creation of a range of opaque overglaze enamel colors was one of the most important contributions made to ceramic technology during the Qing era. Previously, the enamels used to paint ceramics had been transparent and of limited hues. With the advent of opaque colors, painters could blend tints together to create varied gradations of shades and hues. Development of these enamels began during the reign of the Kangxi emperor and continued into that of the Yongzheng emperor (1737-1795).

One particular type of decoration was cloisonné, that is to ‘paint’ the entire glazed object in brightly coloured enamel paste set between very fine bands of metal. Fired again and then polished, the vessel was given a bright jewel-like sheen. Indeed, some examples from royal tombs actually have semi-precious stones set in them. The cloisonné wares would continue to be very popular in the subsequent Qing Dynasty and much imitated in Europe. During the Ming Dynasty, cloisonné pieces were generally reserved for the imperial court and temples since the scholarly class considered them rather too garish to adorn their own homes.

The Buddha sits on a lotus petal seat, wearing a five-leaf crown, holding a treasure bottle in both hands, wearing a gold-painted pastel lotus garment, folds and turns, wearing a garland on both arms, decorated with a ring on the chest, the image is dignified and beautiful. Face, body, hands, and feet apply gold color. The inscription “Five” in the base is clearly identifiable.

The colors developed in the early part of the Qing period were used throughout the dynasty and continue to be used today in the decoration of porcelains.