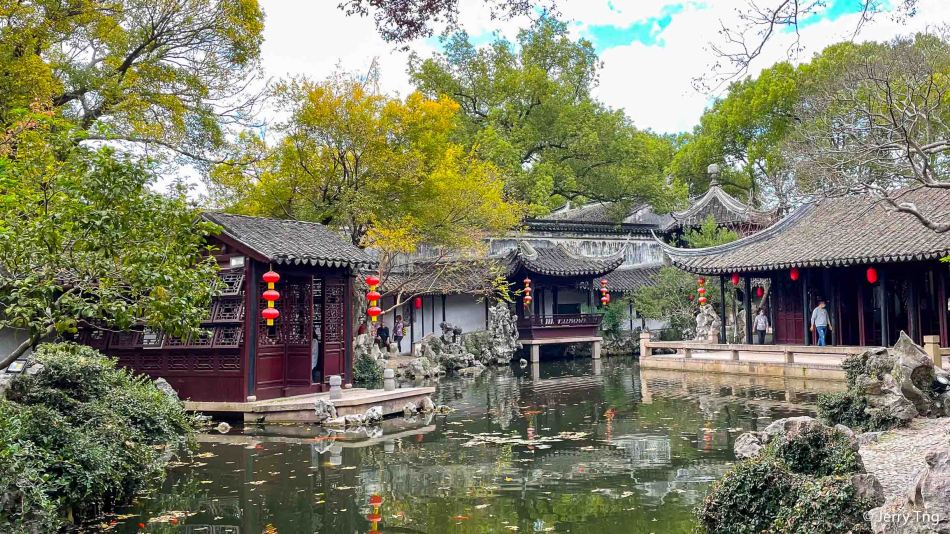 In Tongli there are many ornate buildings that survived from the Ming and Qing dynasties. Many were preserved as they were when built because the water town was lucky enough to escape the devastations of wars.

Tuisi Garden 退思园 was built during 1885 and 1887 by Ren Lansheng (任兰生) who was relieved of his office as government official for corruption allegations. Taken from a verse from the Chinese classic 《左传》“进思尽忠，退思补过” , Tuisi 退思, which means “Retreat and Reflect”, was an introspection of his behaviours (and also to tell his superiors that he had repented his ways).

In Tuisi Garden, you can feel the very ancient charm from the historic wood buildings.

However, you will be surprised to find the very fantastic water garden hidden in, where pavilions, corridors, bridges, halls, houses, rockeries, pools, old trees, lovely flowers, adorable fishes, etc. are all very harmonious and nice in this secret garden.

Walking along the stone-paved path or standing on the pavilion on rockeries, you can appreciate the especially terrific sightseeing of the natural and traditional garden.

Retreat and Reflection Garden has been listed as the World Cultural Heritage Site by the UNESCO. For its amazing beauty, there is a Tuisi Zhuang (退思庄) in the botanic garden in New York, US, which is built according to Tuisi Garden, which completely demonstrates that the Chinese garden has already got popularity from the entire world.

The Three Bridges (三桥) in Tongli refers to Taiping “Peace” Bridge (太平桥), Jili “Prosperity” Bridge (吉利桥) and Changqing “Celebration” Bridge (长庆桥), which is one of the must-see highlights in Tongli Water Town. Forming a shape like the character “品” in Chinese, the Three Bridges is the treasure place in Tongli.

You could see people walking on the bridges and boats running below. Especially during festivals, there will be very busy and jubilant, because local people treat it very auspicious and happy to walk along the Three Bridges.

So I followed the custom to harness more good fortunes and better health by walking along the Jili Bridge, Taiping Bridge and Changqing Bridge in order for one round without going back.

Jiayin Hall 嘉荫堂 or Good for Posterity Residence was built in 1922 (the Nationalist period 民国) and the owner of the mansion was Liu Bingnan (柳炳南), who was the relative of Liu Yazi (柳亚子, 1887 – 1958), a famous Chinese poet. Liu Yazi had once lived in the house.

The front door is built in Shanghai’s Shikumen 石库门 style, which is characterised by the doorframe built from masonry with solid wooden doors. The design and patterns are very simple, but note the intricate words on the door – 厚道传家 Passing the barton through hard and honest work – which indicated that the owner of the house was a “honest?” businessman. And the patterns of the pebble mosaics in the courtyard are taken from the Eight Immortals – 八仙过海各显神通 The Eight Immortals Crossing the Ocean In Their Own Ways – signifying the owner’s capabilities in business

For Jiayin Hall, the bricks for building the outer walls have been specially processed to have smooth and reflecting surfaces, quite different from the other houses in Tongli which are mainly built in the Ming and Qing dynasties. You will be welcomed by the three smiling and auspicious figures, Fu, Lu and Shou (福, 禄, 寿 meaning blessing, wealth and longevity) along the centre beam on the roof.

The main architecture of Jiayin Hall is Gauze Cap Hall 纱帽廳, which is built by imitation of the Ming Dynasty style. The ceiling of the spacious and majestic hall is very high and the beams in the front are curved like the shape of a gauze cap of a mandarin, hence the nickname. Carved patterns of stories from the Chinese classic “Romance of Three Kingdoms” carved on the gauze cap shaped beams will definitely catch your attention.

Amazing carved railings that represent the flora of the four seasons embellished the railings of the corridors on the upper floor. These carvings, as well as others inside the hall and around the property, are what makes the visit to Jiayin Hall memorable, and established the hall as one of the best example of Suzhou gardens.

The backstreet of Jiayin Hall runs along a small river and leads to the Three Bridges. Leisurely walk along the street, look at the green trees and see the boats sailing on the river will be a great aesthetic experience.

There’s a tiny Museum of Traditional Wedding Customs. Nothing much to see here as most of the items were collected from the commoners and are not really rare or of historical value. We can say this is a collectibles museum of sorts. Move along now, everyone. Next week, we shall walk along the old streets of Tongli.

But to truly enjoy Tongli, you must not only visit the historical sites. You should slow down the pace and enjoy the sights and sounds of the laid-back life in the Jiangnan Water Town.

This is Part 2 of a Five-Part Special on Tongli