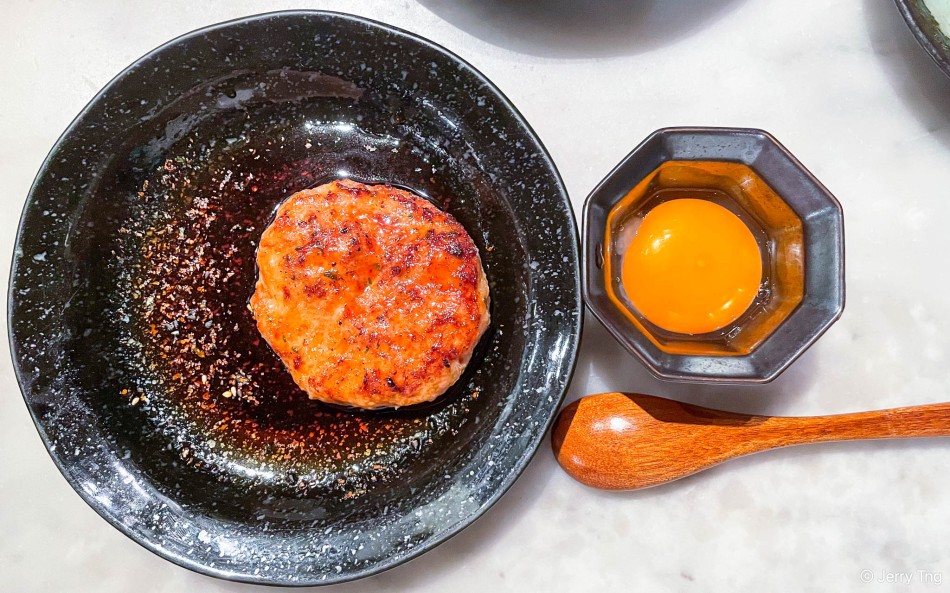 Hip, underground yakitori and cocktail gastrobar in Tiong Bahru, this is not a traditional Japanese Izakaya serving yakitori.

This place has a lot of history. Hua Bee Restaurant (華美餐室) is famous before Eric Khoo made it even more famous. The 70+ year old has been serving Teochew-style fishball noodles at this location and it was also the film site for Eric Khoo’s ‘Mee Pok Man’ (1995).

I have never eaten at or tried its famous mee pok noodles. They still serve this in the morning and Hua Bee is a fully functional traditional kopitiam, alas one of last in Singapore. You know, the ones with marble top furniture and formica covered chairs and stools.

But tonight we were here for their yakitori. Helmed by the Chef Asai Masashi, who has been given the nickname Japanese Sour Plum Soup 日本酸梅汤 by the mee pork ladies, he got his culinary grounding in Hyōgo, Osaka and Kyoto. In 2013, he collaborated with Unlisted Collection to launch dual concept yakitori restaurant Bincho.

Firstly, you cannot enter from the front door. This was an arrangement with the mee pok store owners. The front door remains the store front of the noodle store. So you have to go the carpark on the back of the store and then find this inconspicuous iron door to enter.

In what would be the air well of the historical building, there’s a industrial looking bar that would be crowded by now if not for Covid. The bar cannot be opened, only the restaurant part of the izakaya can continue to operate.

The yakitori bar would occupy what would traditionally be the kitchen of the coffee shop. Due to reduced seating capacity and 2 pax per table restrictions, the 8-seater bar can now accommodate only 4 diners (or two couples) at any time. You can imagine how difficult it is to get that coveted seat now.

We ordered the 7-course Tori Zukushi Set, which had a bit of everything, and complemented the set with some seasonal ala carte items. These were described below in the chronological order that they came in.

Shirako was in season. Frankly, I find the shirako (cod milt) too bland despite the dressing, the milt itself was not as creamy and sweet as the ones I had in Japan.

Nothing to complain about this izakaya staple. Ankimo (monkfish) liver is like a liver pate but rich with omega-3 and other goodness associated with fish liver oil.

And then, the first course of the dinner set. I was disappointed that the ankimo liver made its appearance once more. They should have warned us that the appetiser has this already. The simmered mushroom was a welcomed differentiation.

The mesclun salad was dressed with a balsamic vinegar, soy and olive oil wafu dressing and topped with crunchy chicken skin. The dressing was very light and delicious, but it was the crackling like skin that stole the limelight. This made me worry about how the burrata salad that we ordered would fare against such a good salad.

We were wrong, the persimmon, prosciutto ham and burrata salad was a notch above the chicken skin salad. Persimmon (called kaki in Japanese, and not to be confused with oysters, which are also kaki) are in season, the crunchy, sweet fruit was like the usual melon that was paired with the prosciutto ham in an Italian style. The mesclun was dressed with the same delightful sauce, but it was the burrata that held the whole thing together. It’s like have the best of both world – a Japanese salad with an Italian capers. Excellent.

Now the first of the yakitori, and instead of skewers, the meat were served on a plate. So instead of three pieces of each, you now have two 😉 And they were all grilled to Japanese precision for doneness and perfection for taste. Coupled with spiced sale, yuzu mustard and fresh grated wasabi, the parts that were once forgotten were in the spotlight for once.

Tosaka (cock’s comb) is seldom found in yakitori’s menu in Singapore. And it was not so readily available too in Japan as every cock has only one comb. But it was an acquired taste. The crunchy comb was seasoned with Japanese chilli and pepper. They tasted boiled, and not so crunchy, but it was a nice option from the usual chicken and pork kushiyaki choices.

They say that the test of a yakitori-ya and the chef is the tsukune (chicken meat ball). What is more delicious then a perfectly grilled tsukune with teriyaki sauce and a raw Japanese egg yolk. And they nailed it here at Bincho. This is by far the best tsukune I have tasted in Singapore. (Move over Kazu, you have been surpassed.)

Next, three items that were grilled and then soaked in sauce (tare). Again, perfection with the liver and heart. But it was the neck that totalled blew our mind. When you think of chicken neck, you think of skin and bones. This was totally boneless and so soft and flavourful.

The grilled Sanma fish, fresh from the waters of Japan and grilled over their binchotan charcoal grill. You can eat it lightly drizzled over with calamansi. I preferred it just the way you are, baby.

And for the main dish, the grilled chicken thigh over rice. I was hoping it like an oyakodon 親子丼, with a runny omelette on top. Instead it came with a concentrated cup of chicken stock. I would not call it soup as it was so rich and oily.

So I decided to do what was appropriate in Japan, ate the chicken and then poured the soup into the rice for a zuke and it was perfect.

And the final end to a wonderful dinner, a delightful and refreshing peach panna cotta dessert with white wine compote, milk ice cream, pieces of fresh peach and jelly.

The enclave of Tiong Bahru can be daunting for first timers, and not all cab drivers (and lesser Grab ones) would be able to navigate around the Tiong Poh, Seng Poh, Moh Guan, etc. Poh Guan Terrace is a one-way street, so you would need to go around the block. Block 78 is on Guan Chuan St, so you would most likely be alighted at the PS.Cafe. Do not fret, you are at the right place – just walk around the art deco building and Hua Bee is right at the end of the corridor. You just have to find the car park and the back door.

Bincho is an Unlisted Collection restaurant, which you have come to expect quality and a comparable price to pay. The dinner set was pretty affordable at $70++, so a dinner with drinks will set you back around $100. But it was a really good yakitori restaurant, and the closest to getting an air ticket to go to Japan.