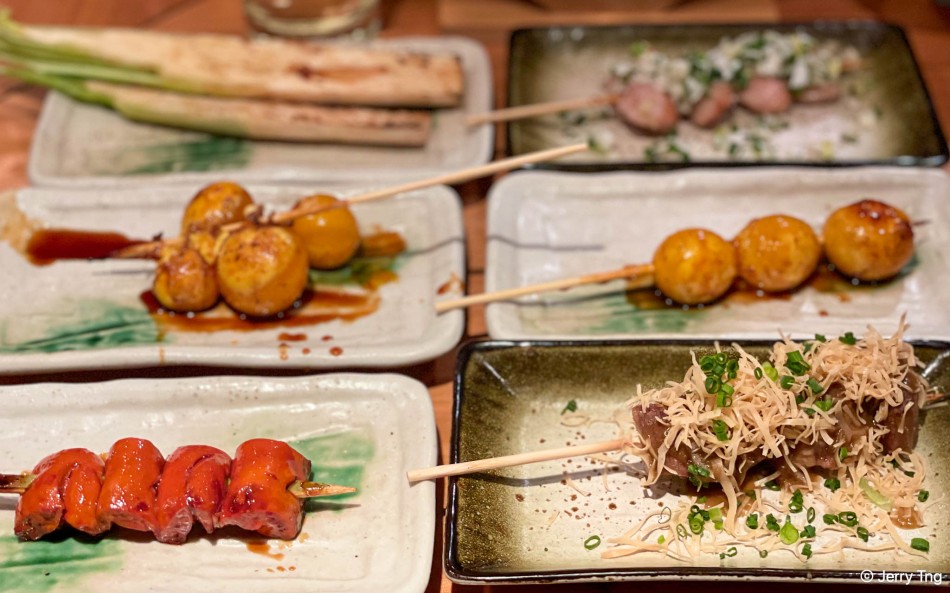 I love yakitori but it is difficult to get a truly authentic experience in Shanghai. But Torishou changed my mind about that.

The first floor bar counter faces the open kitchen, offering customers a close-up view of the chef’s meticulous preparation, while the second and third levels accommodate groups of diners.

Owner William Zhang is a restaurant entrepreneur with an affinity for Japanese food done right. He owns four Japanese restaurants around Shanghai (and a number of other establishments), including Sushi Takumi, Shi Jian, Man Long and Torishou, each focusing on a distinct ingredient or style of Japanese cuisine. To put it lightly, he knows his stuff when it comes to Japanese food.

A visit to the 34-seat Torishou restaurant is a culinary exploration of an entire chicken, from neck to tail. Grilled chicken parts are still the restaurant’s most popular dish. The rare parts skewered on bamboo sticks, including chicken heart arota, diaphragm and chicken eggs, are highly recommended. But, even if you miss out on the rare orders, choices are plentiful: chicken tights, tenderloins, neck meat, gizzards, liver, heart, chicken wings, white meat and meatballs are all recommended.

You can tell the difference, but this is Hatsu ハツ Chicken Heart from a black chicken. This is the first time I had yakitori using black chicken. Great start to the dinner.

This is a rare cut even though every chicken has a long neck. But to get a skewer of seseri せせり neck, a lot of necks need to debone and that little amount of meat extracted. And to make it even rarer, it used the necks of black chicken.

It has been described as a lantern, but Cochin ちょうちん Immature egg yolk (lantern) is basically unformed eggs still attached to the fallopian tubes of the hen. This is a rare part that I saw it for the first time in Shanghai this trip, but it is quite popular in high-end yakitori restaurants in Japan.

It was like eating a half-boiled egg yolk, very rich and flavourful. Tenderly grilled and glazed with a sweet and savory tare sauce, it takes a lot of patience and skill to grill this properly which breaking the delicate yolk.

If you would freak out on the cochin, there’s a saner alternative. Uzura no Tamago うずらの卵 Quail eggs spot a larger yolk relative to the amount of egg white, giving it a richer flavour and delicate texture like the cochin.

Pōkunekku ポークネック Pork Neck is a fatty and tender cut of pork that is perfect served grilled. A stable in Thai BBQ, this was underwhelming when grilled simply with salt and topped with chopped scallions.

Pretty much it is the fatty liver of the chicken and only 10% of chickens will have fatty livers, which make this a rare part and therefore given the name foie gras even though the chicken was not forced feed. Shiro Reba (白レバー) Chicken Foie Gras has less odour peculiar to chicken liver, and it has a sweet, mellow and creamy texture.

Tebasaki 手羽先 Chicken Mid-Joints is the classic yakitori cut. The mid-joints had been opened on the sides which made for easy eating as well as even seasoning.

Technically this is not a chicken dish, but gyutan 牛舌 beef tongue has its stronghold in the yakitori menu. Their gyutan was stewed before grilling, so it was served quite thick.

Nin’niku 大蒜 Garlic was simple but good. Served with a spicy miso sauce, grilling broke down the sugar in the acid and made it sweet and mild.

Tori Karaage 鶏唐揚 Fried Chicken was competently made and served with a yoghurt sauce instead of mayonnaise.

Tsukune つくね Meatballs is usually how a yakitori-ya is judged. It takes skills and experience to make a delicious and succulent tsukune.

Kawa かわ Chicken Skin can be easily done wrong, it is a minute difference between soft, crispy and hard. And they nailed it for the first half of the skewer, very crispy. Second half was still soft.

Bonjiri ぼんじり Chicken Tail or the “Bishop’s Nose” is one of the most succulent parts of the chicken. It is often mistaken to be the anus of the chicken, but it is actually the soft tip of the butt. And if prepared properly, there would not be any funny smell. When grilled, it would be crispy and smooth at the same time.

Ginnan ぎんなん Ginkgo Nuts supposed to help with memory retention, but overeating this would cause mild poisoning. What a dilemma – my memories or my life.

Imagine the amount of chicken carcass that are generated from this popular restaurant. The chicken stock used to cook this Toriniku Okayu 鶏肉お粥 Chicken Porridge was so rich in chicken taste.

Japanese yakitori-ya, informal charcoal barbecue restaurants serving grilled chicken skewers, have always been about off-beat offal and rare parts of the chicken, though most in Shanghai focus on conventional offerings. But Torishou stuck to the Japanese tradition. True to their mission, they have been offering rare parts since they opened.

There’s no compromise whether you are dining alone or in a group when you are here at Torishou. Even when I order one skewer, it was properly done and served promptly.

This place is really popular, given its high quality yakitori and equally wonderful price. So a reservation is essential to get a seat.