The fastest way to order is get one of the many sets available and then fill the gap with other side dishes or maki. During peak dining hours, the wait can be up to 30 min for the sushi to be prepared. Everyone is catching a flight, so no one gets preferred service.

I am not very sure if it was associated with the honten in Tsukiji. That shop had a Michelin star back in 2016, but lost it subsequently. I guessed profitability sometimes has to take precedence to maintaining the star.

The speed of the service was quite prompt (I was the only table that day, it’s not exactly meal time) and got everything I ordered in under 10 min.

Kazunoko (Herring Roe) 数の子 is one of the popular dishes in Osechi Ryori (おせち料理), the Japanese New Year food.  What is Kazunoko?  It’s herring roe that’s marinated in dashi soy sauce seasoning.  As Kazunoko symbolizes many children and prosperous family, this rare and expensive delicacy is considered an important part of Osechi.

Each roe is a collection of tiny eggs and it has a beautiful golden color.  As you bite into it, it gives crunchy texture (the texture is explained as korikori コリコリin Japanese).  The tiny eggs break apart from each other and disintegrate inside your month.  The individual eggs have a caviar/tobiko-like texture. What a way to start the meal as I would be celebrating the Chinese New Year in another 3 days! 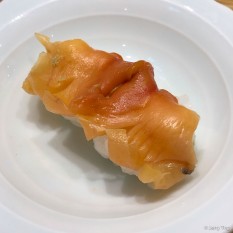 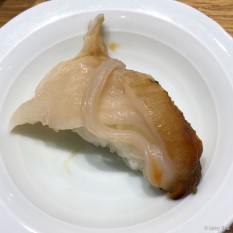 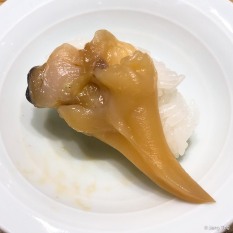 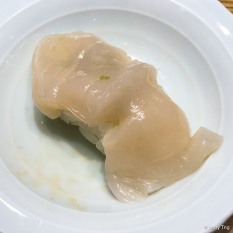 From top left, in clockwise direction, the shellfish in the set included:

Had to have the 鐵火卷 Tekkamaki as the finale, my favourite maki and done so well in Japan. “Tekka” means “iron on the fire” and the red color of the fish looked like the color of a hot iron glowing in the fire. Most of the sushi shops in Singapore would have served raw tuna. Most Japanese sushi shop worth their names would serve the tekkamaki with Akami Zuké (本鮪の漬 / marinated tuna).

In the good old days (again), refrigeration has not been invented, so in order to preserve tuna and keep its red appearance, they were marinated in a shoyunikiri (soy sauce marinade) made with soy sauce and mirin. Every chef has their secret proportion and formula, which makes tekkamaki a fantastic finale to any sushi meal.

The shop is located in the shopping atria between the south and north terminals of Terminal 1. There are many other good restaurants in the atria, like the rice specialty store Hachidame Gihey, yakiniku, tonkatsu, ramen, etc.

They have another branch in Haneda airport too, if you are wondering.