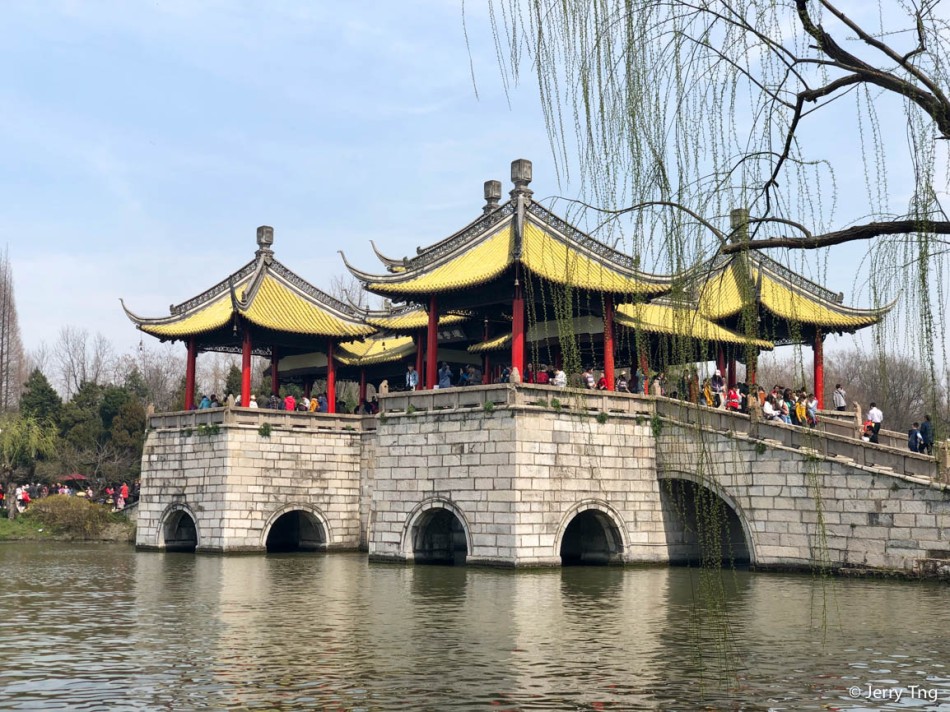 A Chinese poem goes like this, “烟花三月下扬州。” The most beautiful month visit Yangzhou is the Lunar calendar month of March. I was there a month too early.

The story of Yangzhou

Yangzhou is always known as the city of opulence. There’s the old saying.

During the tumultuous period between 420-528AD in China history known as the Northern and Southern states came a period of Chinese cultural Renaissance. Both art and sciences flourished, and exposure to foreign cultures (whether they liked it or not) encouraged great wealth generation. And with the Grand Canal, affluence came to Yangzhou. So a short story from that period.

Translation:
Four scholars gathered to talk about their aspirations. One wanted to be the Mayor of Yangzhou, one wanted to be rich, and another wanted to longevity. So the last one concluded, “Why not be all? Be wealthy in Yangzhou and lived a long life!”.

Yangzhou is known for the good life. Emperors of every dynasty have showered lots of praises about Yangzhou, and every poet and artist has described or painted Yangzhou that was left for posterity. And the pinnacle of those praises and admiration can be condensed into an area known as Slender West Lake.

Slender West Lake was the culmination of that culture, art and opulence, a place where art met money and gave birth to gracious living that was the envy of everyone in the country. 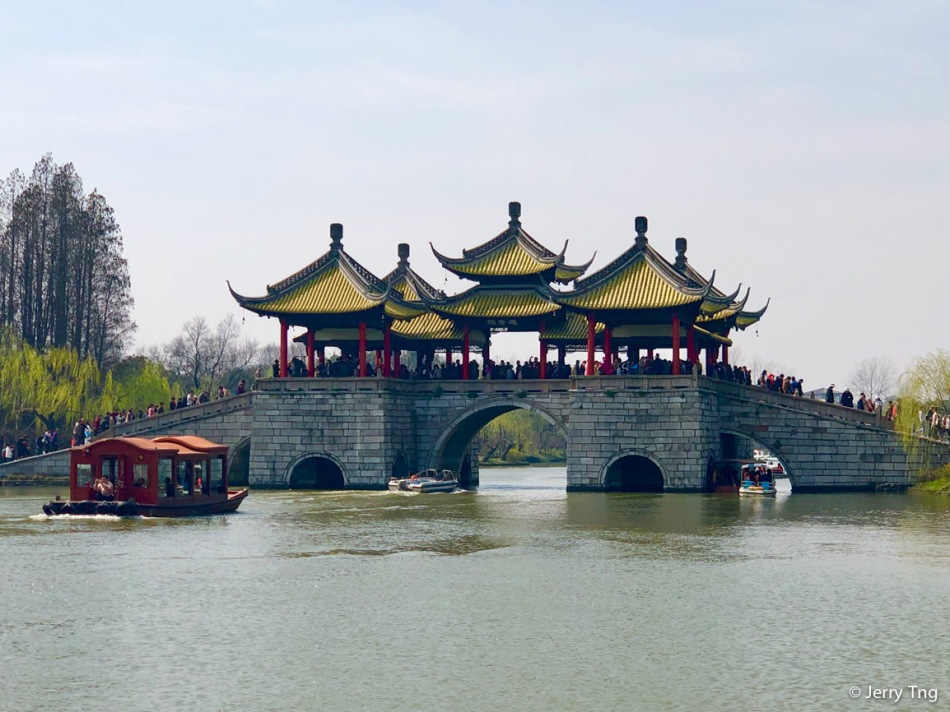 Unlike West Lake in Hangzhou, Slender West Lake was an off-shoot of the Grand Canal and like Venice contained many intersecting canals and mansions built on islands formed by these canals.

个园 Ge Garden is one of the 4 famous gardens of China – 北京颐和园 Summer Palace of Beijing, 苏州拙政园 Suzhou ZhuoZheng Garden, 承德避暑山庄 Chengde Summer Resort, and the most well kept one in whole of Yangzhou. I have been to the ones in Beijing and Suzhou, the Summer Palace was huge, the ZhuoZheng Garden was elegant, but Ge Garden, in my personal opinion, the most deliberate. This is because the owners were never mandarins that got them as a bequest, but merchants that built it through their wealth. 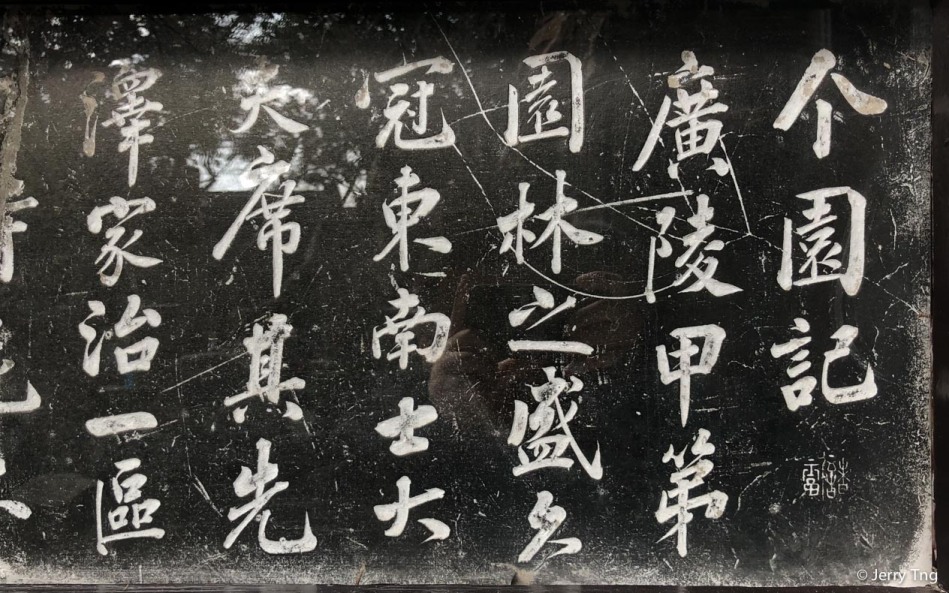 From the name, Ge 个, the character resembles bamboo leaves. The place was named Ge Garden because the owner that did the most renovations Huang Zhi Yun 黄至筠 was a bamboo lover. Even his name was bamboo 筠

Getting out from the main door of Ge Garden, you will get into the ancient and still bustling Dongguan Street. On one end is the National Road and the other end is the ancient Grand Canal. 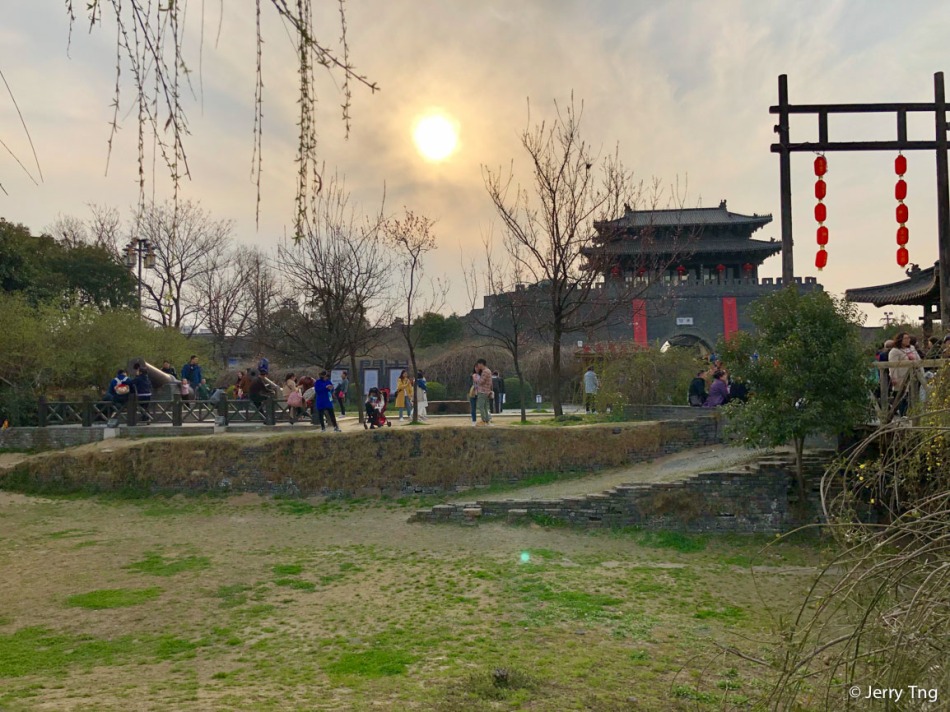 The Grand Canal was one of the most amazing ancient engineering marvels. It dated back to Sui dynasty 581AD, but sections dated back to 5th century BC. It stretches from Beijing in the North all the way to Hangzhou in the South and along the way passes through Yangzhou, Suzhou and finally ending in Hangzhou. While the primary function to send resources from South to North was diminished with railways and highways, the canals still evoke romantic feelings of a nation once powerful, strong and dominated the world stage. 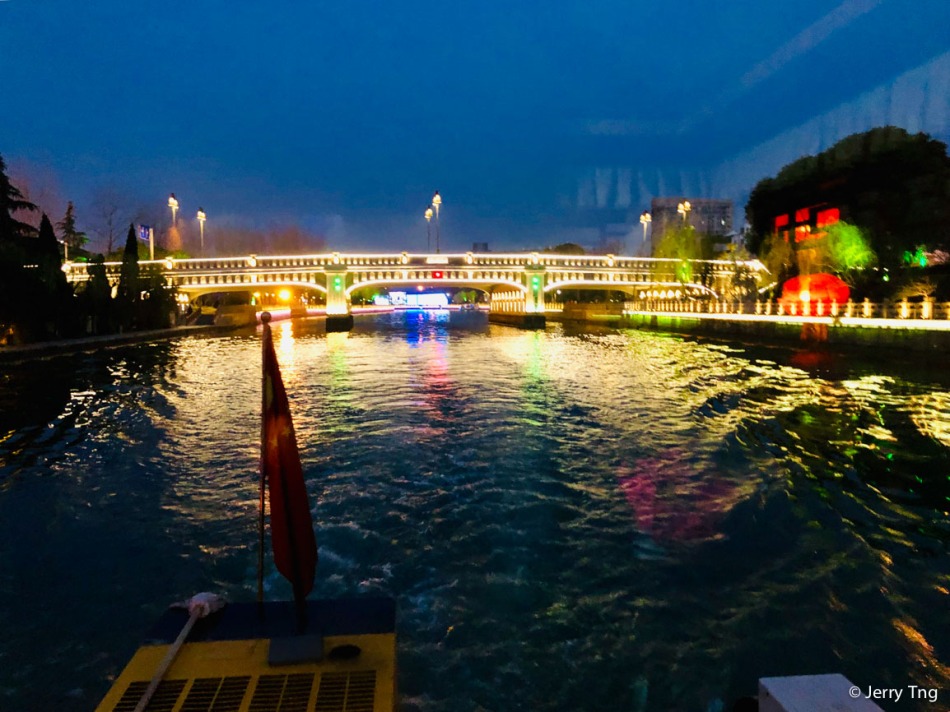 The Sui capital was Yangzhou. Here in Yangzhou, the old section of the canal was refurbished. You can take a nice canal cruise and watch the lighted banks come alive in the evening.

Singapore in many ways resembled the Yangzhou of old. It had no natural resources, it had a well-educated populace and skilled workers, its citizens made money from trading and the government flourished because of a robust tax system that came from locals and foreigners alike.

Yangzhou was open for trade and accepted people from all nations. Its importance only dwindled when another disruptive advantage/technology took away what was given to Yangzhou in the first place. Yangzhou had the Canal and the Salt Tax, but subsequently it was relegated to second-tier, even third-tier, after salt tax was abolished and other modern (and better) routes of moving goods were discovered. Even the silk trade was taken over by the modern textile industry of Shanghai in the late 19th century.

The people of Yangzhou never thought the good times will come to an end. When Jiang Zemin, a native of Yangzhou, was President, the city had a short revival, but not enough to bring it to the same standing as Shanghai or Guangzhou, or even Shenzhen. They held on to their glorious “old days”, they believed that the nation owed them for its zeitgeist and cultural heritage. This made them just a tourist city, a curio and nothing more.

I liked to visit old cities and towns. They are all a lesson to me not to be complacent about what we have today in Singapore. History is a mirror, as I was taught in school, and it reminds everyone that in the sands of time, 200 years meant nothing. You can lose the advantage in a matter of years, just like Yangzhou.

Happy birthday, Singapore! May you prosper for another 200 years.

0 comments on “Yangzhou Beautiful in March”