Rolf and Daughters is a neighborhood restaurant located in the historic 100-year-old Werthan Factory building in Germantown Nashville. Fantastic farm to table small plates restaurant in Nashville that blew our minds with bold flavors and fresh ingredients.

Chef Philip Krajeck was put on earth to make pasta. Let’s look at the evidence: He happened to live between two Italian families while growing up in Brussels, Belgium. One night he’d be eating gnocchi with fresh porcini with one family, cacio e pepe with the other the next. Later, he worked in a Swiss kitchen surrounded by Italian cooks. That’s where he learned how to form the twisted pasta called strozzapreti (“priest strangler”), among other shapes.

The food draws on Northern Italian and Mediterranean influences with Southern ingredients to create a dynamic and seasonally driven menu. Their take on “modern peasant food,” involves thoughtful cooking rooted in a commitment for using the
best ingredients available in the moment and a passion for executing classic
techniques.

The restaurant encourages communal eating, with long benches and small plates for sharing. Thank God we have a large group, and we pretty much ordered everything on the menu.

Hand churned butter with nori and a really soft sourdough. Butter was full of umami.

This is the classic beef tartare reinvented. Sweet balsamic vinegar, garlic oil and dill sauce, chopped beef tartare. The introduction of the dill was a break from traditional of using capers with beef tartare. No shaved cheese, which is good too.

Stracciatella is a soft cheese made from buffalo milk. Creamy and savory and heightened flavors from marigold, olive oil and spruce, yes, spruce from pine trees.

Coppa is an Italian ham made from dried cured muscle. They cured their own coppa and lightly moistened with peanut oil. Yummy treat.

Salted milk cheese from sheep milk with mesclun kale greens tossed with simple vinaigrette. The combination of kale and mesclun was very flavorful and satisfying.

The green strawberry provided the tang and the fruity touch. Ikura provide the alto ESA and umami. Tossed with a light mayo, bacon bits with roasted baby potatoes.

Every mouthful was a complex mixture of different flavors

Rolf & Daughters pride themselves on their homemade pastas that were coupled with innovative sauces.

Homemade twisted spaghetti that has been flavored with Thai basil and nettle. Tossed with roasted hazelnut, olive oil and ricotta.

Sarvecchio is a worthy replacement of parmigiano on this spaghetti ragout.

Guitar string pasta (chitarra) but not as fine as angel hair, the umami packed cream sauce was so satisfying.

A very cheeky pasta and my favourite for the evening despite its simplicity. These pasta are literally called “husband blinders” because of the resemblance of sharp ends of the spindle. Cooked with a creamy, heavy fermented milk. It’s like pasta cooked in original flavour yakult but it’s savory instead of sweet.

No the garlic did not turn bad. It just referred to whole garlics poached in oil. The salmon was done perfectly, rightly salted with a pinkish red centre.

A roasted half chicken with crispy skin covered in buttery whole garlic and preserved lemon sauce that celebrated a symphony of simple rich flavors.

The pork chop was tender and what a sweet meat it was!

Savory from caramel, sweet from the rice mousse, tang from grapefruit granitas and fig for an added dimension of herby proportion. So so innovative and yummy.

The orange slices were dried and candied. The sweet potato ice cream was fantastic.

Tang from the huckleberry. It was almost like Oreo but the star was the sourdough ice cream that made the chocolate dust tasted like Oreo. 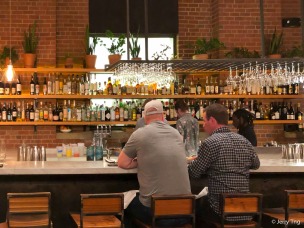 Converted from an old boiler room, the industrial look was perfect backdrop to a solid dinner. The service was polished and the staff was knowledgeable of the ingredients and origins, especially the pastas. The bar was supposed to be one of the best in Nashville, with top mixologists coming to guest bartend sometimes.

“It was never our goal to be nationally recognized,” Krajeck said in 2012 when he first opened R&D. But just nine months later, Bon Appetit was in town and named R&D its #3 Best New Restaurant of 2013. Worth a detour if you are in Music City.