As we all know, Hong Kong is a renowned culinary city, with a good mixture of East meets West eateries alongside the local Cantonese ones. And Michelin-starred VEA Restaurant serves Asian-inspired French cuisine.

VEA stands for Vicky Et Antonio – Vicky and Antonio in French. Vicky is Vicky Cheng, the visionary chef formerly of Liberty Private Works, and Antonio is Antonio Lai, the legendary bartender behind Origin, The Envoy and Quinary, the Central-based cocktail bar which has been named one of the world’s top 50 by Drinks International magazine.

VEA features a degustation menu. You have only two choices, a full version or a vegetarian option.

Firefly squid (蛍烏賊) was in season at around the same time as the cod fish milt (白子) .

Chef wants to present them in the most Cantonese way possible, and that is 椒盐 salt and pepper. The squid texture was crunchy and the shirako soft and creamy, very contrasting. Too bad, each only gets one stick each.

This amuse bouche was featured in VEA’s recent four hands with PASTE. Caviar, kimchi and pita was nicely balance of brine, spice and texture. Caviar was Chinese beluga from Lake Qiandao (千島湖). I was so surprised to know that Kaluga Queen from Hangzhou now produces 30% of the world’s caviar. If not told, one would never have found out that they have used a Chinese caviar.

Smoked quail egg marinated in ponzu. The quail eggs were marinated in pans and soy sauce, and then presented in a glass dome cover. Apple wood was used to smoke the eggs but it was not obvious. The yolk was runny but the white was already a tad too hard, almost like 铁蛋.

Little slips of lyrics by the pastry puff 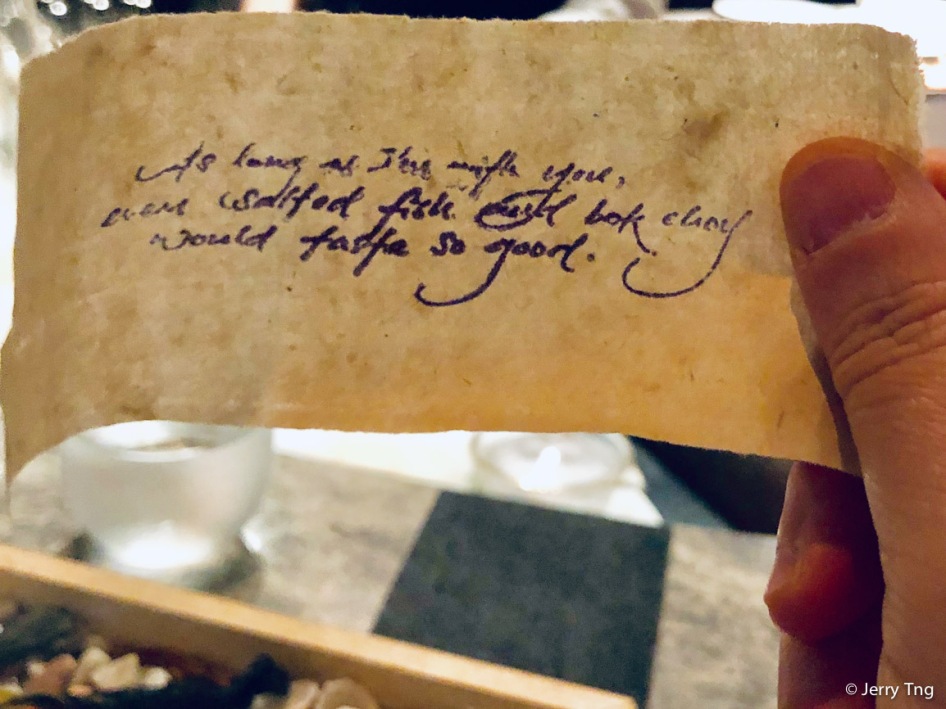 Next up, a music box was presented to us and the music of George Lam 林子祥 – “Without the Two of Us (分分鐘需要你)” – filled the air. This was Chef Vicky’s favourite song by Ah Lam (whom happened to be one of my favourite HK singers as well), and in its lyrics was the line “salted fish and bak choy would taste so good”.

So Chef Vicky would use these two ingredients and make many variations of an appetiser. Tonight iteration was a pastry puff filled with salted fish and bak choy mousse.

Salted fish and bokchoy puff was topped with shaving of parmesan cheese. When you popped the little puff into the mouth, the familiar salted fish taste filled the palate. I loved salted fish, I wished it would be stronger than this.

And the third part of the snacks was a tea made with dried bakchoy, carrots and water chestnuts. The tea was served with all its ingredients in a glass pot and poured into a cup using a special leaf filter.  The colour looked like Puer tea but was pretty savoury and reminded me of Brand’s essence of chicken. 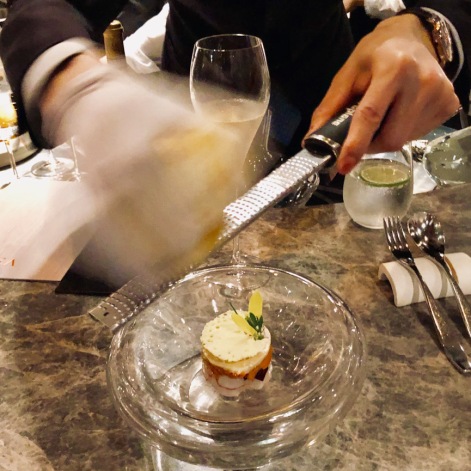 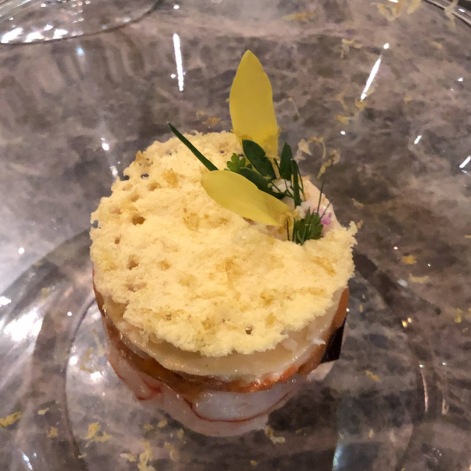 The tangy and fragrant lemon peel dust complimented the sweetness of the corn which balanced with the umami of the uni and langoustine. I have no idea what the jelly was there for.

Dusting the tomato with burnt brioche 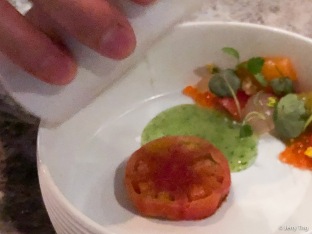 Tomato sprinkled with burnt brioche and a longan sauce 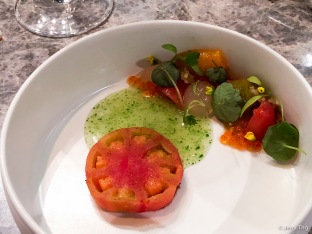 Fruit tomato, longan, nasturtium, trout roe came in an elaborate three-layer container that resembled the tomato. Japanese momotaro tomato is developed in Japan and popular because of its balance of sweet and tangy flavours. The course is assembled in a complicated manner, starting with the tomato smoked in kelp. A burnt bun is scratched onto the tomato to provide some smokiness. Next, it is delicately placed on the second layer which already comes with a side salad of cherry tomato, trout roe, nasturtium (an edible flower) and pea sprouts. Finally, a sauce of basil and tangy is poured around the tomato.

I don’t like this course because I could not understand the combination of the lot. It was elaborate but did not make sense from a taste profile. 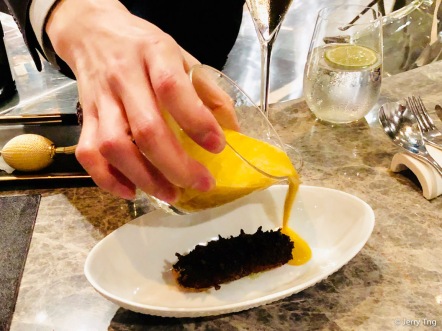 This is Chef Vicky’s signature dish – roasted sea cucumber, female mud crab roe, ginger, 22yrs hua diao wine. The spiny sea cucumber had been braised before having its top turned crispy. Then a sauce made from roe of the female mud crab, crab stock and chicken fat was poured around the sea cucumber. And finally, 22 year old Huadiao wine was sprayed over the dish using a fancy perfume atomiser.

Chef Vicky showed the crab that they used in his Instagram account. All that goodness was used in creating a really heavenly sauce for the bland sea cucumber.

The sea cucumber was stuffed with sweet mud crab meat.  The overall result was really tasty, full of umami and other flavours.  When the huadiao was sprayed, the musky yellow wine filled the air and smelled like a wet cat. That was pretty bad. However the contrast of textures between the crispy top layer and the gelatinous nature of braised sea cucumber, together with the really yummy sauce, made this a very good dish.

On the side there is a “salad” of different types of citrus fruits, longans (龍眼), celtuce stem, fennel, radish, sansho leaves (木の芽), dill, and perilla leaves.

I really enjoyed the crispy silver pomfret, but the fish stock with sauerkraut was a bit too bland. It could do better with a slightly stronger flavour as the rice crisps soak up the sauce.

Dried fish maw is considered a Chinese delicacy not found in Western cuisine.

The 10-year-old African fish maw braised with fish stock was tender, and our server proceeded to mix some chives, quinoa, and caviar from Lake Qiandao (千島湖) into the emulsified fish stock before drenching the fish maw with it.

The sorbet was made with these candied apricots (蟠桃果) which are iconic in this part of the world.

The palate cleanser was quite interesting but instead of cleansing the palate with something sour, it left a really awkward aftertaste that needed to be washed down with some water. 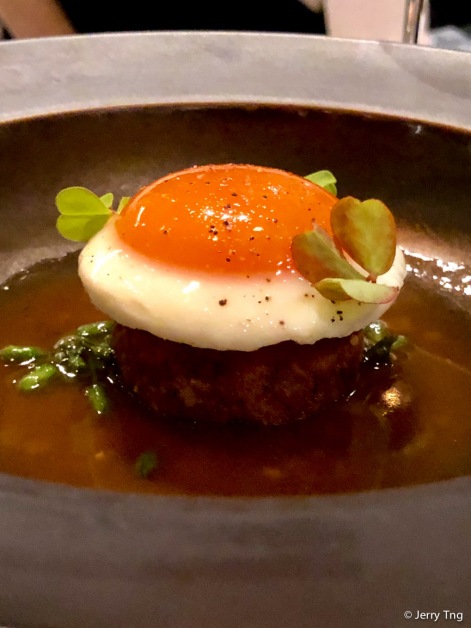 Crispy winter melon (脆冬瓜), Taiyouran egg (太陽卵), tonkin jasmine (夜来香) is made up of three main components. A piece of winter melon has been floured and fried to get a crispy shell. On top, a sunny-sideup Taiyouran was placed.

Japanese Taiyouran eggs have a natural sweetness & a rich, thick orange yolk. Chickens who lay these eggs are reared on a special diet of Stevia leaves. The chicken’s natural diet and environment results in eggs that have a bigger the normal yolk that has a much more intense flavour than the average egg.

I was really happy they used Tonkin Jasmine, which is an edible flower that I really loved. The sauce was savoury and provided the taste for the winter melon. But it was the egg that stole the whole show. 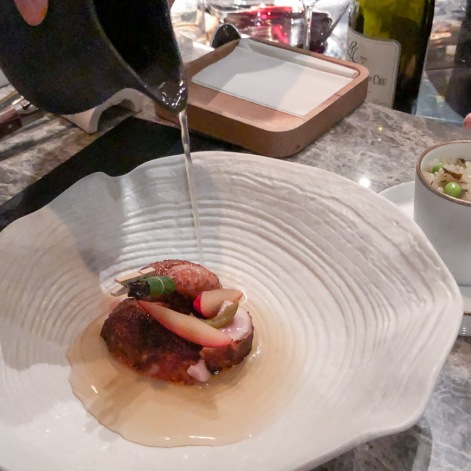 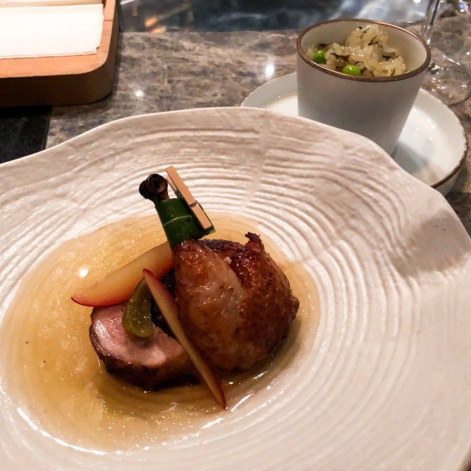 The quail was done in the 炸子鸡 method, which is a Cantonese technique of marinating the chick in soy and then deep fried to a crisp on the skin without any flour. A light sour plum consommé was added to the crispy quail, NOOOOO!!! On the side was a free-flow of preserved Chinese olive fried rice 橄榄饭.

“Zha Zi” quail, sour plum, preserved Chinese olive fried rice was surprising nice. The sauce destroyed the crispiness of the skin, but balanced out the gamey quail. The quail was tender and flavourful, thanks to the deep frying. Again, well executed, only if the sauce was left on the side for dipping instead. I have not idea what the rice was all about. The rice was cooked al dente, a bit too hard for my liking.

Next up two desserts.

This was the palate cleanser that would have worked earlier. Instead it came during dessert. Even though there’s no mint, the celery gave the whole dessert a very refreshing bite that almost worked like Colgate. And the lime and green apple combination gave it the dessert dimension while the coconut mousse balanced all that sourness.

Finally, mignardises were presented in a nice jewellery case, and you can pick as many or as little as you want for the coffee.

While they were pleasing to the eyes, the tastes were quite awkward. Firstly, they were not too sweet, or not sweet enough. You would expect the milk mochi with condensed milk filling to be sweet for the espresso. But it was rather bland. Then there’s the pineapple with spices, why would you need have spice reintroduced during dessert? And the worst was the pastry – I still cannot make out why you would make such a difficult flavour.

While this was a really fun and interesting meal, it cannot be compared with other French meets East restaurants like Andre or Ta Vie, where the Asian roots of the chefs are seamlessly blended into their cuisines. You can enjoy the strong French culinary traditions with Asian influence, and not the other way.

VEA tried too hard. The Asian influence was evident, but the French techniques got in the way. Chef Vicky seemed to forget that the final product needs to be harmonious and tasty, not just cheeky and adventurous.

Nevertheless, it was a fun meal. I am sure with time, VEA will develop more depth and come up with something original and ground-breaking. 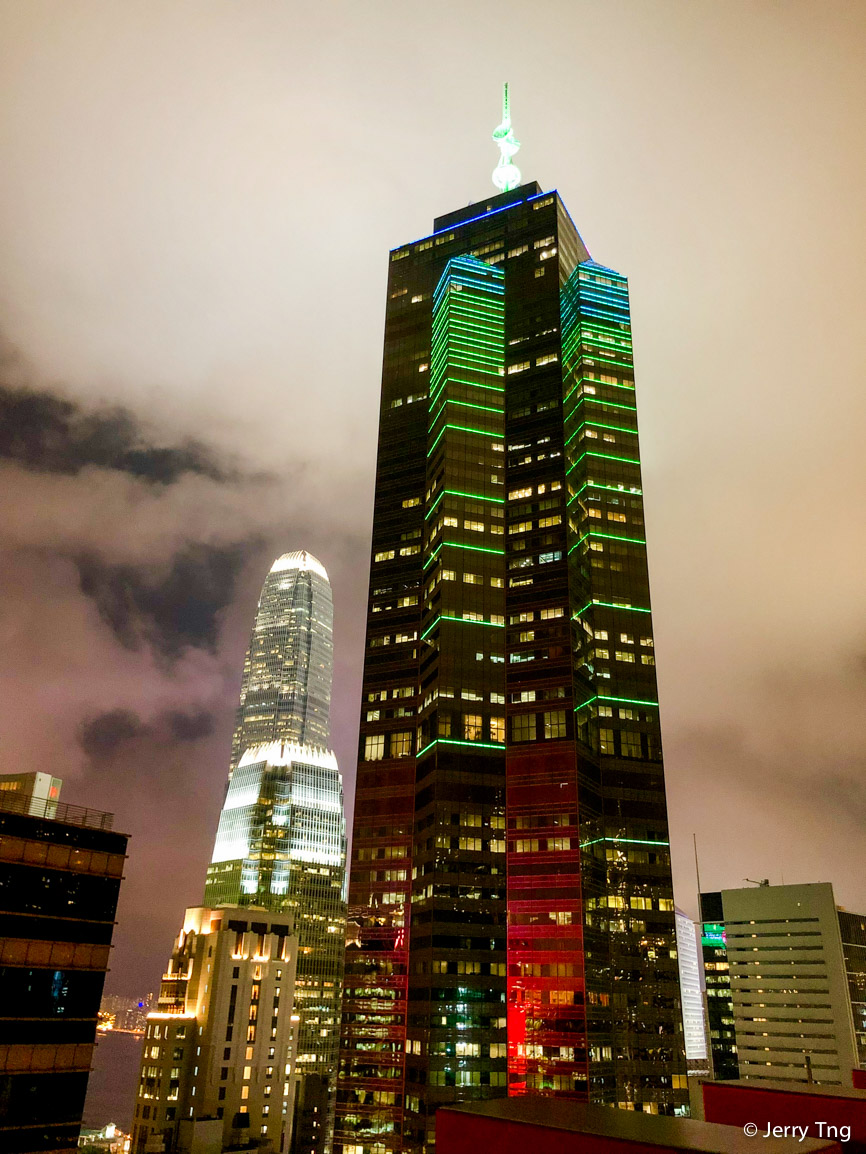 The new establishment takes up the top two floors of The Wellington, itself the newest food destination in between Central and Sheung Wan. 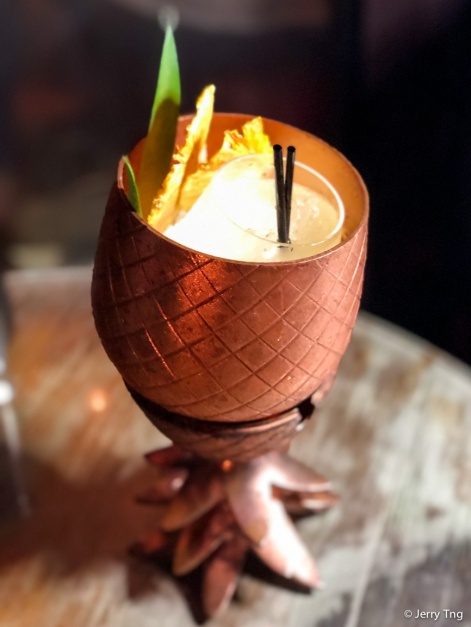 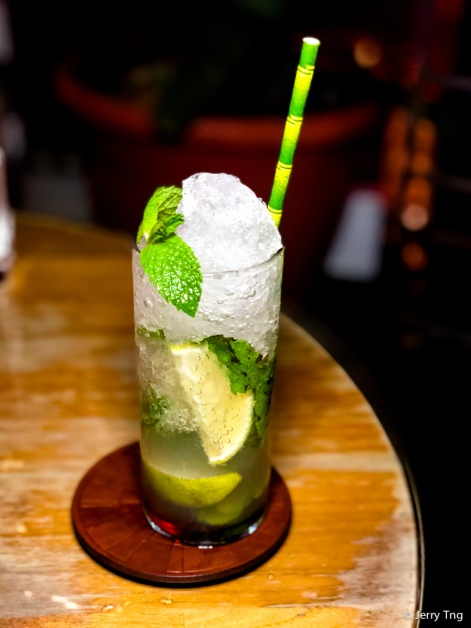 VEA’s lounge is on the 29th floor, while the restaurant occupies the level above. 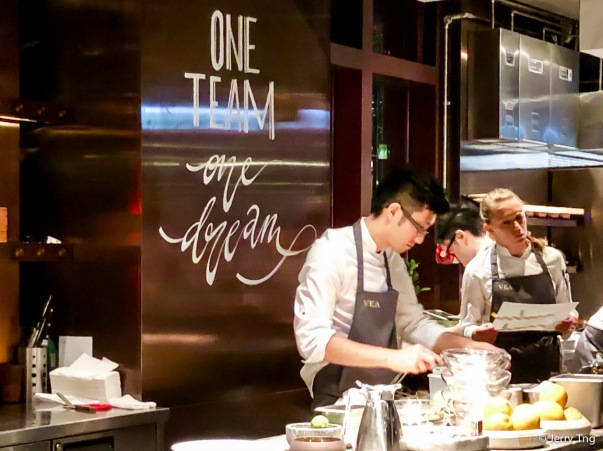 The eatery’s space is comprised completely of counter seating, so you can watch the chefs preparing your meal right before your eyes. Brass fixtures with exposed filaments in pretty cut crystal bulbs and white leather-backed stools give off a chic rather than an industrial vibe. 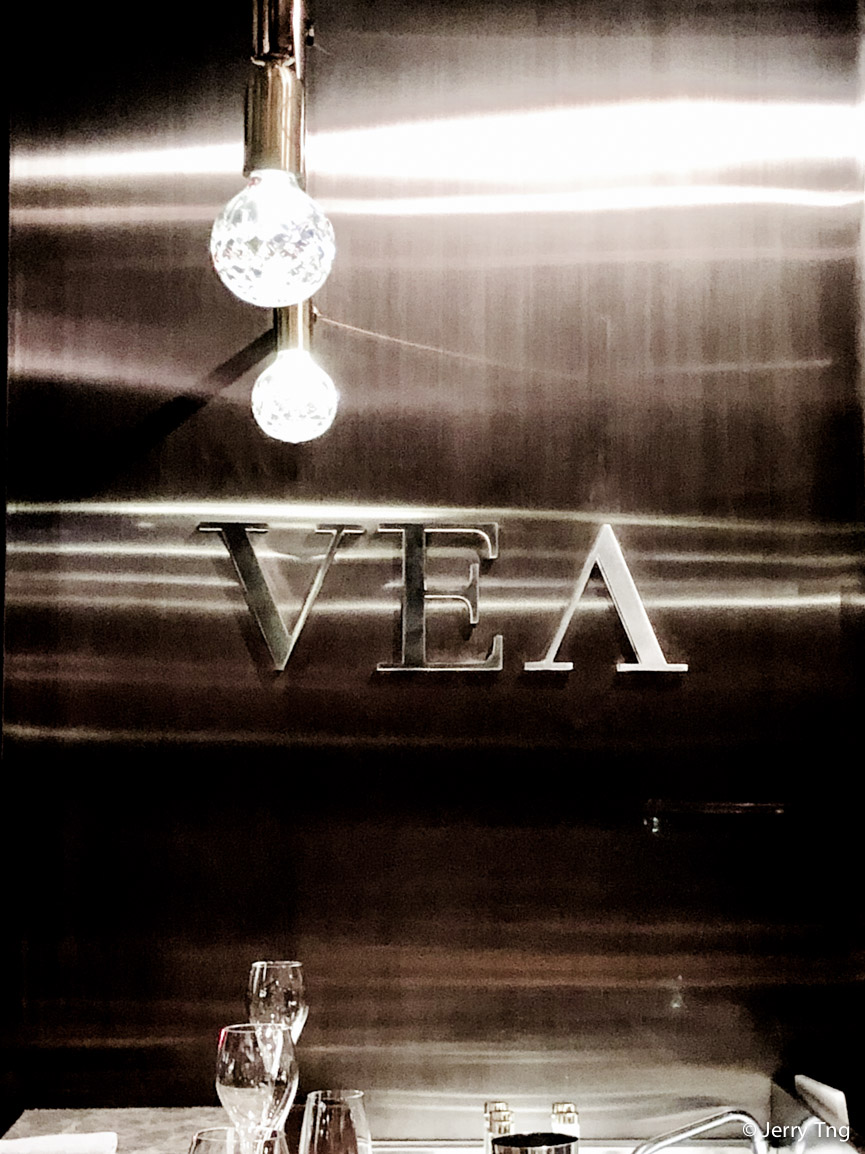