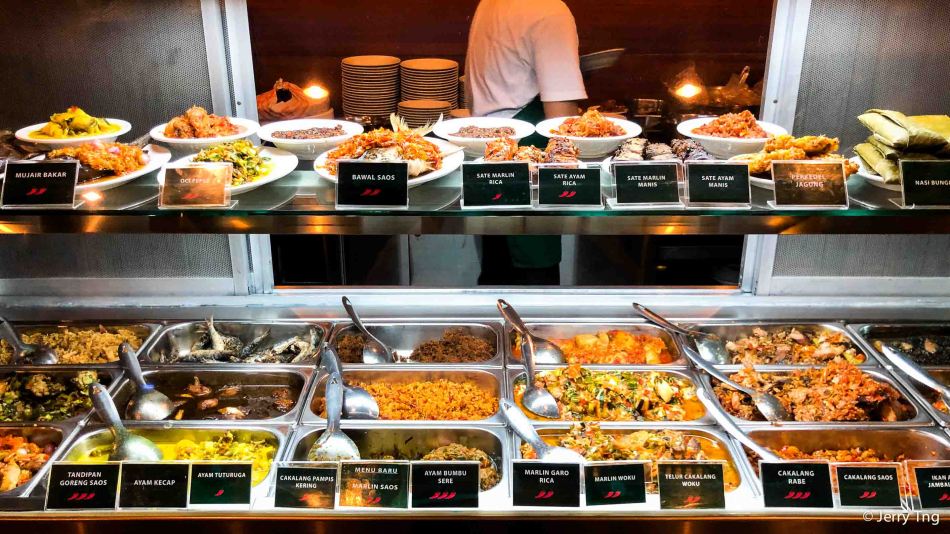 In my recent trip top Jakarta, I was thrown a challenge – something even the locals find spicy. I was brought to Beautika, a Manadonese restaurant.

Manadonese cuisine is well known for its generous use of spices, sometimes making up more than half of the whole dish’s ingredients. It has given the cuisine the reputation of being hot and spicy, often from the freshly chopped chili peppers added in. Common spices used in Manadonese cuisine include lemongrass, lime or citrus leaves, lime juice, chili peppers, spring onion, shallots, garlic and candlenut. Seafood, pork and chicken are often cooked in Manadonese signature bumbu (spice blends), such as rica-rica and woku. Spicy condiments are also served as dipping sauce for seafood, such as dabu-dabu and sambal roa.

Dabu-dabu is made chopped red chili peppers, bird’s eye chili, shallots, red and green tomatoes, and seasoned with salt and sugar. It is usually used as a condiment for seafoods, especially various recipes of ikan bakar (grilled fish). Dabu-dabu has a flavour similar to Mexican salsa. It is sometimes described as Manado’s raw sambal.

Here, a grilled golden pomfret is topped with a liberal amount of dabu-dabu. While the fish itself is not exciting, the dabu-dabu is the main highlight of the dish.

The chicken is really tough and malnourished. So to make it more deletable, they shredded the chicken and mixed it with dabu-dabu. A very dry dish, not my favourite for the evening.

Rica uses a lot of chopped or ground red and green chili peppers, bird’s eye chili, shallots, garlic, ginger, and a pinch of salt and sugar. Such grounded spices are cooked in coconut oil and mixed with lime leaf, bruised lemongrass and lime juice. In Manado cuisine, almost all kinds of meats, poultries, freshwater fishes and seafoods can be made into rica dish

A very simple dish that my domestic helper always make too. Take dehusked corn, mixed in batter and deep-fried. Here, they added spices to provide that kick.

Woku consist of ground spices paste; red ginger, turmeric, candlenut and red chili pepper, mixed with chopped shallot, scallion, tomato, lemon or citrus leaf and turmeric leaf, lemon basil leaf and bruised lemongrass. Rub main ingredients (chicken or fish, in this instance, skipjack cakalang) with salt and lime juices, and marinate for 30 minutes. All spices are cooked in coconut oil until the aroma came up and mixed together with the main ingredients, water, and a pinch of salt, well until all cooked well.

Literally “sour soup”, sup kuah assam is a watery soup of fish or seafood in tamarind or vinegar-based soup. Don’t know what to make of it, it was overpowering with tamarind and assam buay (sour plum) taste. Cooked with cakalang in our case, it was a nice palate cleanser and heat extinguisher after all those burning dishes.

Sayur sengkang literally means “dangling vegetables. Kangkong is what we usually call them. While it is mainly farmed these days, its humble origin was from the longkang (drains) where they grew like weed.

There you have it, my first attempt (and perhaps my only attempt) at Manadonese cuisine. I am not a fan, it is spicy, but it does not have a lot of variety in taste profiles. I will stick to my Padang.