Situated in the Haidian District northwest of Beijing, Summer Palace is relatively closed by to the downtown area.  It radiates fully the natural beauty and the grandeur of royal gardens. Composed mainly of Longevity Hill and Kunming Lake, it owns over 3,000 man-made ancient structures, including pavilions, towers, bridges, corridors, etc.

北京颐和园 Summer Palace of Beijing is one of the 4 famous gardens of China – the others being : 扬州个园 Yangzhou Ge Garden , 苏州拙政园 Suzhou ZhuoZheng Garden and 承德避暑山庄 Chengde Summer Resort. Being the largest and most well-preserved royal park in China, it greatly influences Chinese horticulture and landscape with its famous natural views and cultural interests, which also has long been recognised as ‘The Museum of Royal Gardens’.

When you come in from the East Gate (the main gates where most drivers will drop you), the first view of the Summer Palace you will see is the expansive Kunming Lake.

In the Yuan Dynasty (1277-1368), the Longevity Hill was called 瓮山 (Urn Mountain) because of its urn-like appearance. The low-lying land at the southern mountain foot accumulated water from springs of Jade Spring Mountain, and formed a sizable lake, known then as Wengshan Pool 瓮山池. During the Ming Dynasty (1368-1644), the name was changed to the ‘West Lake’. A causeway was built in the east side of the lake as a water control project. The capital city of the Ming moved from Nanjing to Beijing and many dignitaries and nobles chose to settle down in this area, for it was very similar to the terrain in South China.

By the mid-Ming Dynasty, many private gardens had been established here. Emperor Qianlong of the Qing Dynasty (1644-1911) decided to build a new and truly impressive garden (圆明园 Yuanming Gardens), even though several spectacular imperial gardens had been built during the reign of the former emperor.

The new project was constructed on land formed by the dredging of a water channel and construction of a temple to mark the 60th birthday of Qianlong’s mother. (This temple was destroyed in 1860. Subsequently, it was rebuilt as the present Hall of Dispelling Clouds). 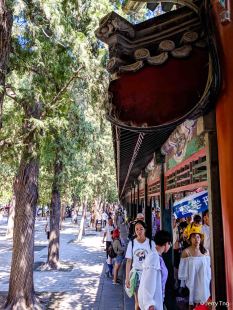 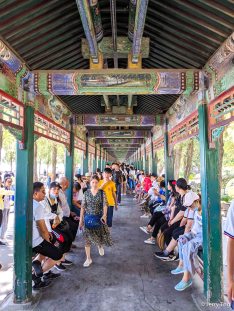 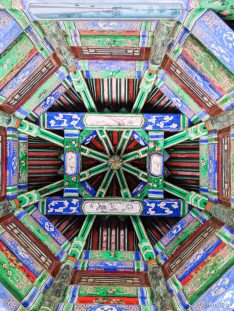 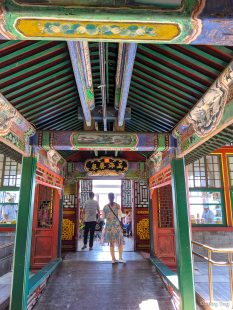 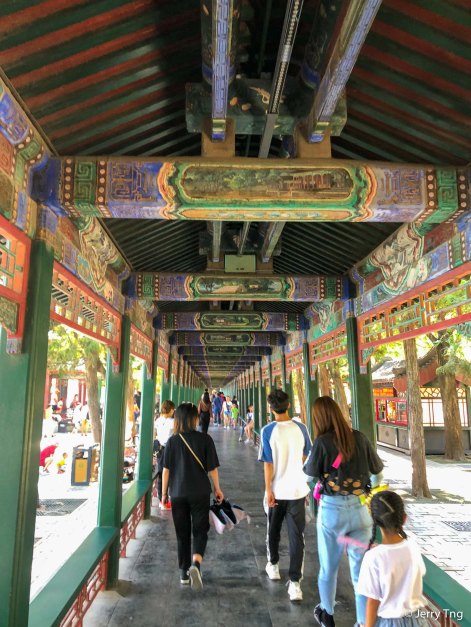 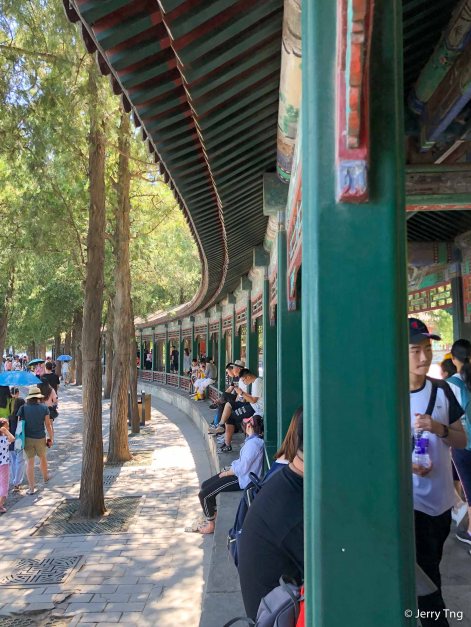 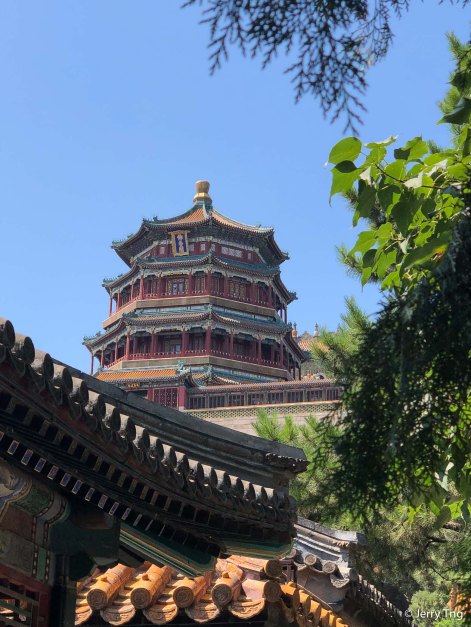 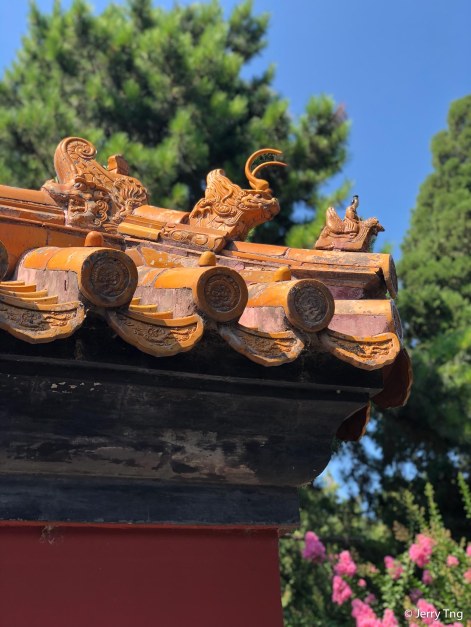 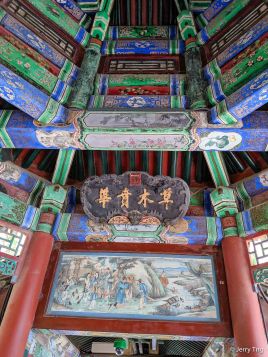 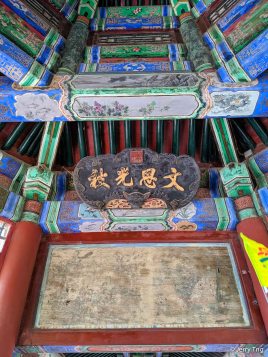 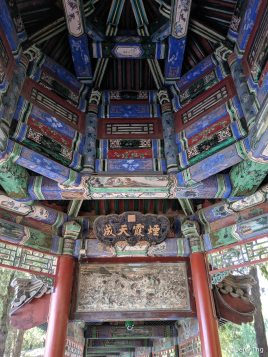 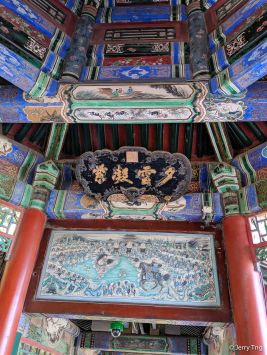 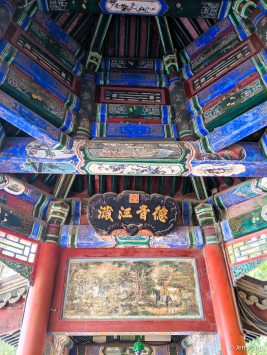 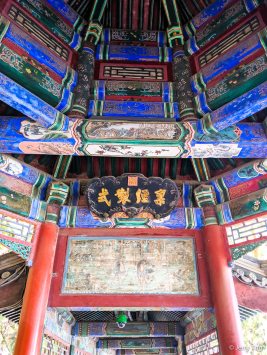 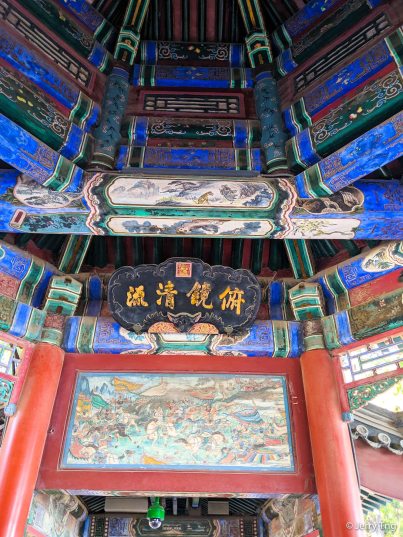 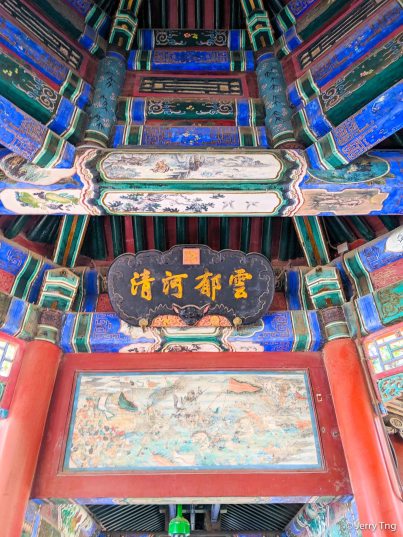 Every beam between the columns is painted with different-sized Suzhou style colored paintings.

Wandering behind Longevity Hill, the water of Kunming Lake forms the Back Lake. Its real name is Houxi (Back Stream) River. It is of artificial origin and didn’t exist before the dredging of Kunming Lake. The earth excavated from the Back Stream was piled up on its north bank, only a few meters from the north wall of Summer Palace but higher than the wall. So, the north palace gate can’t be seen from the Longevity Hill. Along the 1,000 meters river channel mouths, pass towers, rockeries and bridges were built. These divide the river into six small lakes set off well by the buildings on their banks to resemble a water town in South China. 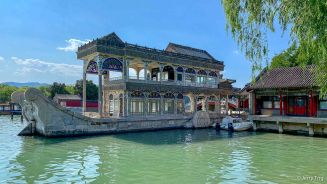 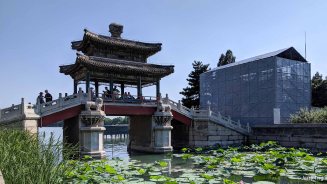 The Marble Boat was built in 1755 with a base made from huge stones. The base supported a wooden pavilion in traditional Chinese style imitating the sailing boats of Emperor Qianlong (1711 – 1799). The boat replaced a platform belonging to Yuanjing Temple during the Ming Dynasty (1368 – 1644). Wei Zheng, a prominent prime minister under the reign of Emperor Taizhong, Tang Dynasty, once said, “Water can carry the boat as well as overturn it.” He meant that water symbolizing the common people can support a good emperor or overthrow a bad emperor. Emperor Qianlong had the huge Marble Boat fastened in the water to indicate the steadfast rule of the Qing Dynasty (1644 – 1911). 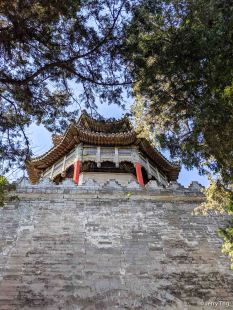 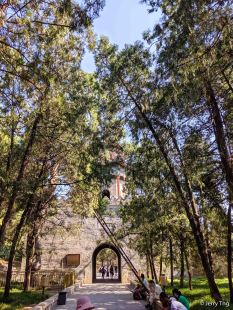 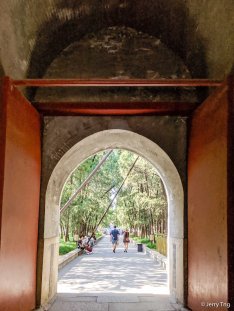 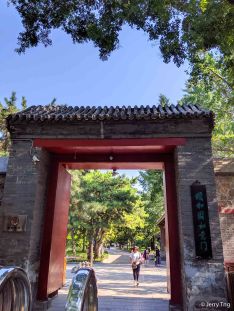 To the west of the Marble Boat 石舫 and Xing Bridge 荇桥, there is a narrow strip of island called  Xiaoxileng. The ‘卐’-shaped river between the island and the western slope of Longevity Hill is called Wanzihe. When the Summer Palace was still called the Garden of Clear Ripples, the Wanzihe area was Xisuo Market Street, also known as the Small Suzhou Market Street, which is an imitation of a bazaar in South China. At that time the market featured many prominent stores. Over time it deteriorated and during the reign of Guangxu Emperor, the Xisuo Market Street  was converted to its present garden architecture.

Hall for Listening the Orioles 听鹂馆 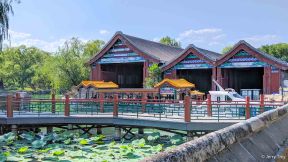 Dock of the Back Lake 船坞

To reach Xiaoxileng from the bridge, go to the wharf at Wusheng Temple (Five Saints Temple), a temple built to honour the gods of fire, mountain, earth, valley and flower. At the wharf you can catch a water ferry to Nanhu Island. Yingxu Tower and Chenghuai Pavilion are the major structures on the small island. Further to the north is the well-preserved dockyard where the largest imperial pleasure boat of Empress Dowager Cixi is anchored. The dockyard was also rebuilt during the reconstruction of the Summer Palace. In addition, two small dockyards were added beside the big one.

Opposite the dockyard on the east bank of Wanzihe is Suyunyan Pass. At one time, a silver statue of Guan Yu (a deified military in the charge of Liu Bei, Three Kingdoms Period) resided inside the pass tower, but it was plundered during wartime and now only a memorial tablet is worshiped there.

2 comments on “Summer Palace 颐和园 as a Garden”