Together with Six Eastern Palaces, the Six Western Palaces accommodated the emperor’s wives and concubines. From the Emperor Yongzheng (reign time 1722-1735) of the Qing Dynasty (1644-11), the empress no long lived in the Palace of Earthly Tranquility, but chose one of the twelve palaces as her abode. The palaces in the Eastern Six Palaces are neat and keep their original layout basically as they were first built in the Ming Dynasty (1368-1644). Comparatively, the western palaces were restructured and renovated over the years to suit the fancies of their occupants. It lies to the north of the Hall of Mental Cultivation (养心殿). They form a group with three palaces on either side of an alley that runs from north to south. Emperor Dowager Cixi spent most of her life in them, so, she made many alterations to the buildings in this region.

Upon its completion in the Ming dyansty (1368-1644), the Hall of Supreme Principle (太极殿) was the residence of consorts and concubines. In the late Qing dynasty (1644-1911), it was renovated and united with the Palace of Eternal Spring (长春宫) as a large compound. The current name was designated at that time. In the late Qing dynasty, the Empress Dowager Cixi and Longyu resided here. 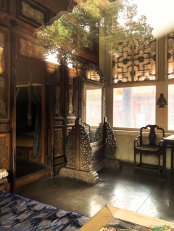 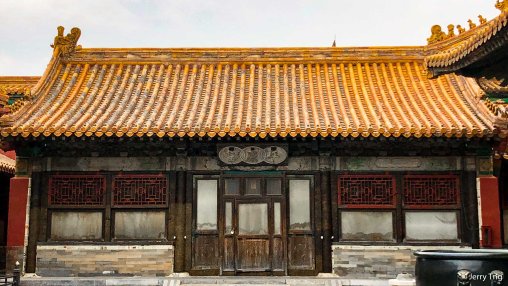 This hall was constructed on the site of the old rear hall and gate. The Empress Dowager Cixi dined, drank tea and rested here when she lived in the Palace of Gathered Elegance (储秀宫). In 1887 Empress Dowager Cixi presided over a ceremony here for selecting the Empress and Concubines for Guangxu Emperor (r. 1875-1908). 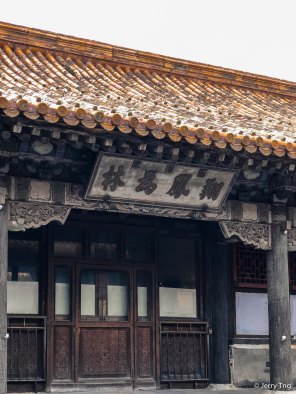 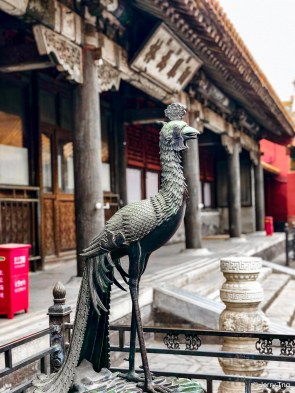 With two finely cast bronze dragons and two bronze deer standing on stone plinths outside, the Palace for Gathering Elegance (储秀宫) is the most famous of the six since the notorious Empress Dowager Cixi lived here for a long period. It was the most important in her life. When she was first selected to enter the Forbidden City and then received a title from the emperor, it was given to her as her residence. She moved out when she became the empress dowager upon the death of her husband Emperor Xianfeng (reign time 1850-1861).

In fact, the Palace for Gathering Elegance was for ordinary concubines of the Ming emperors. Qing Emperor Jiaqing’s two empresses lived here successively. Its status rose in importance especially due to Cixi. Cixi exercised power from behind the throne by her dominating influence over a weak emperor. She spent a huge amount of money upon the refurbishment and decoration, making it the most luxurious for the celebration of her 50th birthday in 1884. 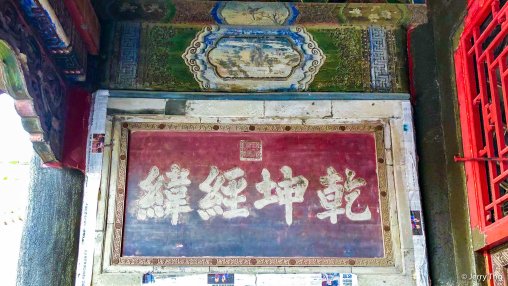 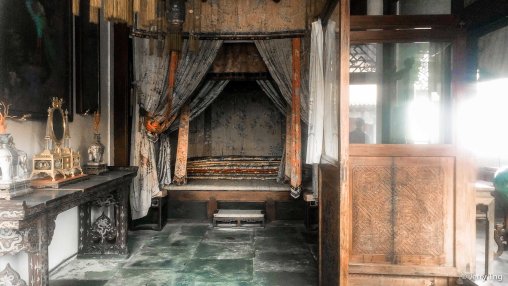 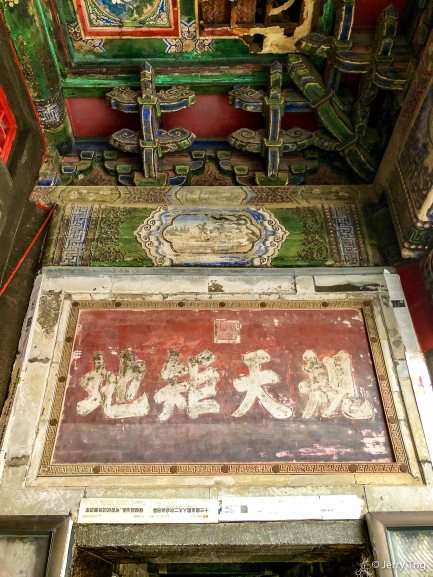 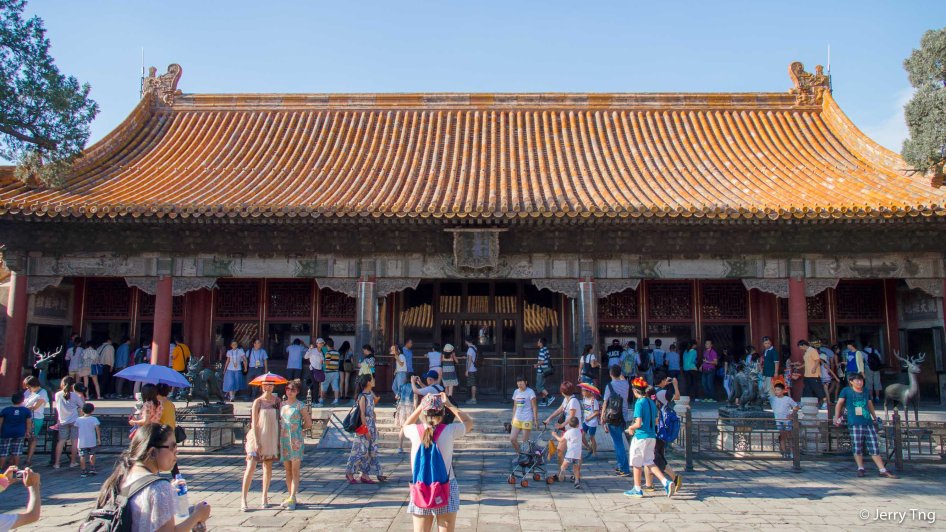 The last owner was the last empress of the Qing Dynasty, Wan Rong. She moved there after her marriage to Emperor Xuantong (also known as Puyi). In an autumn day of 1924 when Wan Rong and Puyi were quietly conversing here, they were driven from the Forbidden City by the National Revolutionary Army. Visitors can see Puyi’s life exhibition here now. 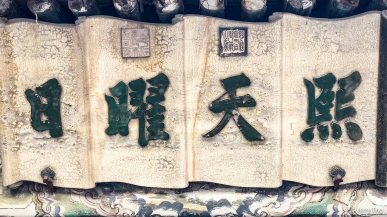 The Bower of Enchanting Scenery is the rear palace of the Palace of Gathered Elegance (储秀宫). 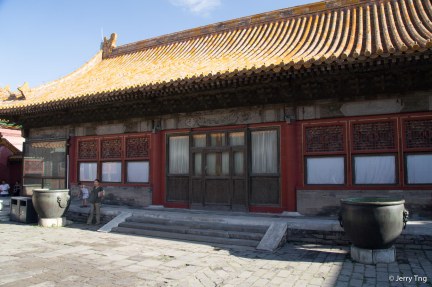 It is said that in the latter part of the Qing dynasty (1644-1911), when the Empress Dowager Cixi was selected into the Forbidden City and conferred as an imperial concubine of the fourth rank, she had lived here and gave birth to Prince Zaichun who was later enthroned as the Tongzhi Emperor (r. 1862-1874). In 1884, the tenth year of the Guangxu reign (1875-1908), the Empress Dowager Cixi moved in again when she celebrated her fiftieth lunar birthday. It was the time when it was renamed Belvedere of Enchanting Scenery and a mini-stage was built within. Now the belvedere is kept what it looked like when the last emperor Puyi (1909-1911) lived in the Inner Court after his abdication, with Western-style furniture, piano and tableware.

Palace of Compassion and Tranquility 慈宁宫

The western area of the Forbidden City in Beijing, called “the World of Women”, is a place where wives of late emperors lived during the Ming (1368-1644) and Qing (1644-1911) Dynasties. In accordance with feudal manners, emperors should not live with the wives of late emperors. Thus, the Palace of Compassion and Tranquility, also known as Cining Palace, was constructed in order to house them. Additionally, great ceremonies were held here to bestow titles of honor upon empress dowagers, to celebrate their birthdays, or to temporarily lay their bodies after they had passed away. 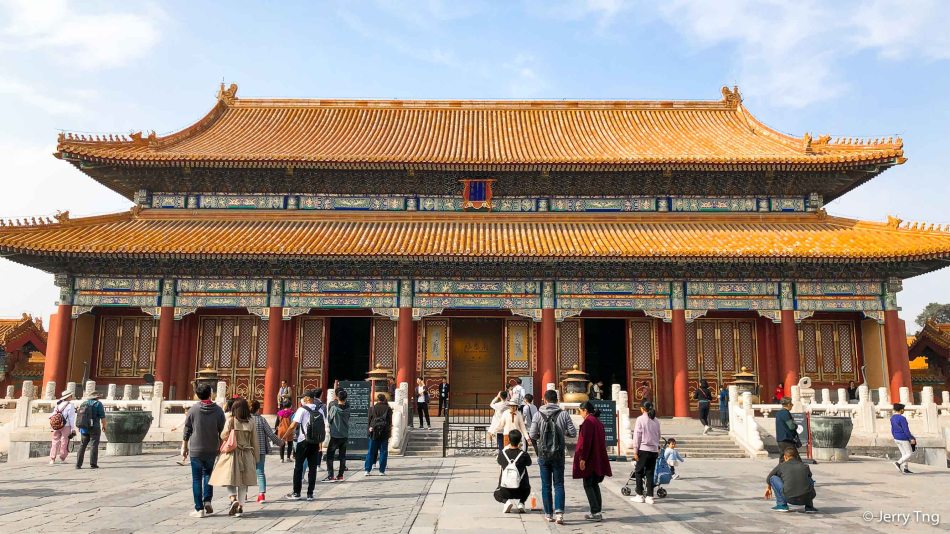 Empress Dowager Chongqing was Emperor Qianlong’s mother. Even after her death, Emperor Qianlong still came to the palace to pray to show his deep reverence for her. He also made a gold tower to contain a Buddha and his mother’s hair that she lost when she was alive. The gold tower was decorated by jewels, treasures, and corals. It was placed in the hall for worshipping the Buddha in the east warm room of the palace. 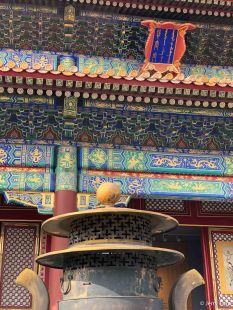 Garden of Compassion and Tranquility 慈宁宫花园

To the south of the narrow square stands the Garden of Compassion and Tranquility, where empress dowagers spent plenty of time strolling and relaxing. Even today, the garden is still tranquil and peaceful. There are many kinds of trees in the garden, including pines, cypresses, phoenix trees, and ginkgo trees.

The main building in the garden is the Hall of Understanding and Bringing Peace (咸若馆) decorated with yellow glazed tiles, which is surrounded by three subordinate halls with green glazed tiles.

To the south of the Garden is a pond, over which is a white marble bridge; on the bridge is the Pavilion over the Stream, facing the Hall of Understanding and Bringing Peace. 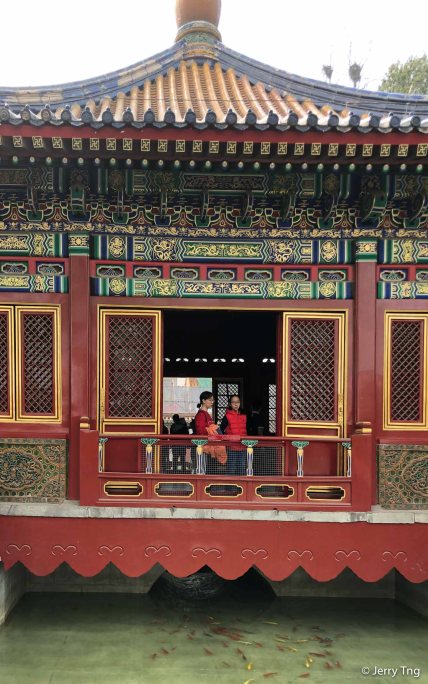 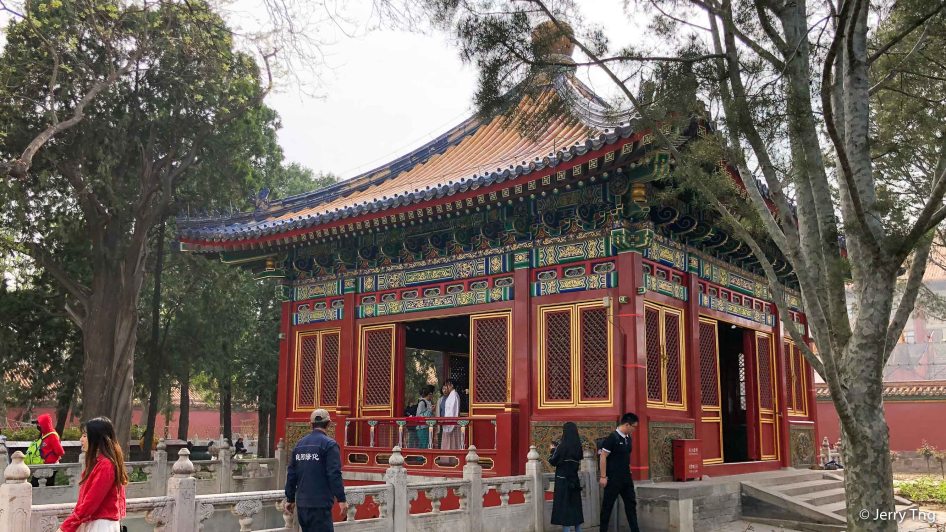 It was Qianlong Emperor who ordered this palace built for his mother, Empress Dowager Chongqing. The Palace of Longevity and Good Health is the place where empress dowagers lived and spent their last years. Emperors came to greet them respectfully every two or three days. 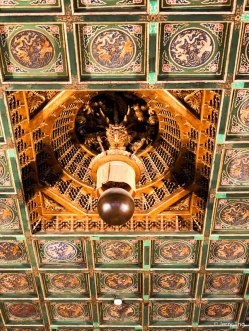 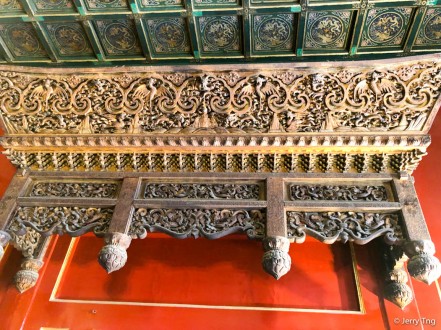 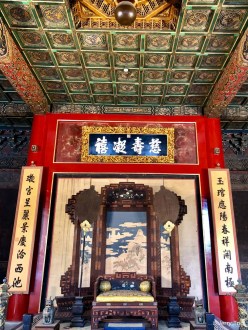 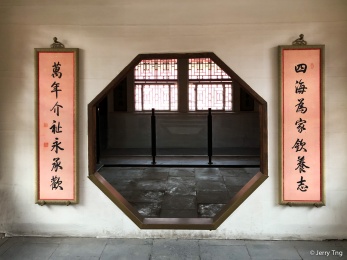 In the northern end of the Qianlong Garden is the Concubine Zhen’s Well. Although this is not part of the Six Western Palaces, Concubine Zhen’s fate was tightly intertwined with the Empress Dowager. 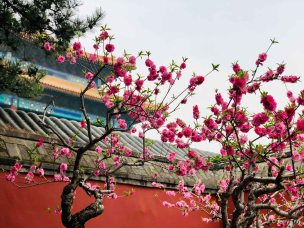 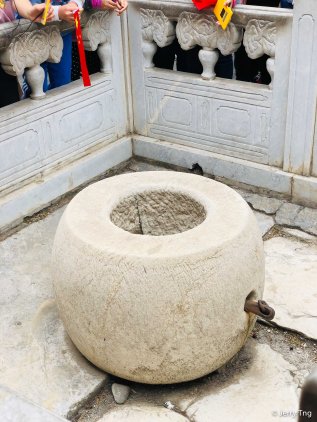 Concubine Zhen was the favoured concubine of puppet Emperor Guangxu (1877-1908), who was the son of Empress Dowager Cixi. Zhen stood by her husband during his failed political reform (an attempt to take away power from Cixi) and Cixi separated the couple and placed them under house arrest. In 1900, the Eight Allied Army attacked Beijing. Dowager Cixi fled to Xi’an with Emperor Guangxu, and ordered Zhen to be thrown into the well. 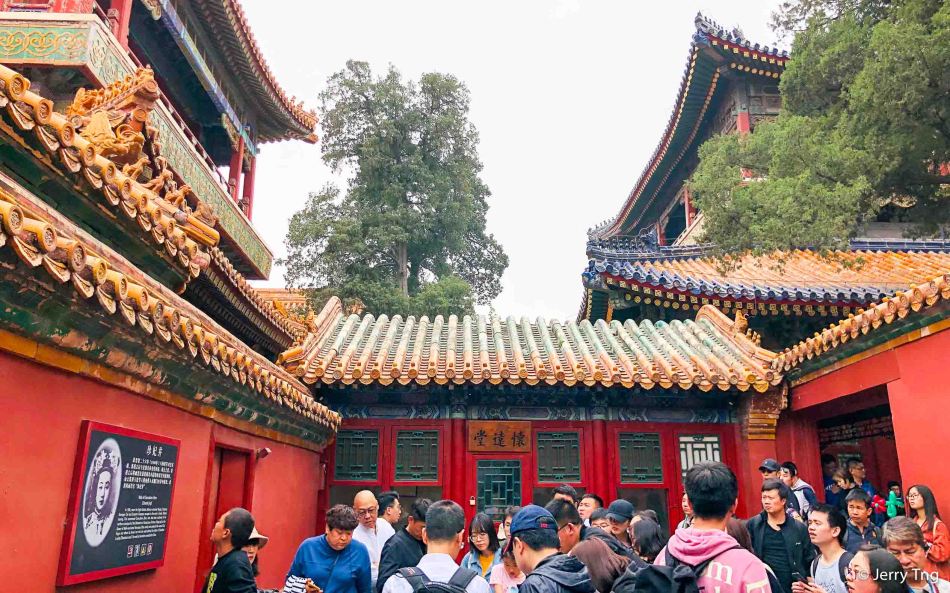 Another interesting group of buildings is the ice vaults of the palace. 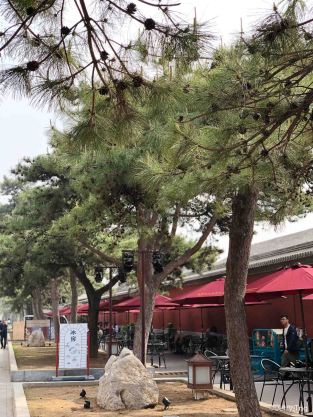 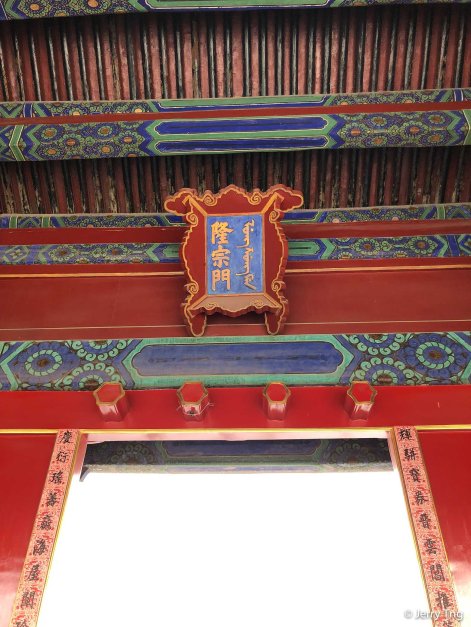 Constructed in Qianlong’s reign (1736-1795), the four storehouses were used to store ice blocks. The  semi-underground structures with their arched roods run from north to south to the west of the paced path outside the Gate of the Thriving Imperial Clan (隆宗门). With a capacity of 5,000 blocks of ice, each storehouse is over eleven metres long, around 6 metres wide and around 1.5 metres before ground. All sides were built with stones and masonry to insulate the heat from outside. The ice was harvested from the moats during winter.