Emperor Qianlong did not die on the throne before he handed the reign to Emperor Jiaqing. He abdicated when his reign reached 60 years in a mark of respect to his grandfather, Emperor Kangxi, whose reign of 61 years was considered the epitome of the Qing Dynasty. So to plan for his retirement, he did what no other emperors in the world had done before – he built a retirement palace within the palace.

Also known as the Outer Eastern Palace, the palace covers an area of 46,000 sq m, the whole area is surrounded by lofty, red perimeter walls forming their own cluster of buildings.

This complex can be divided into three parts: the eastern, the central and the western parts. The central part includes the Hall of Imperial Supremacy (皇极殿), the Palace of Tranquil Longevity (宁寿宫), the three exhibition halls of Treasure Gallery: Hall of Spiritual Cultivation (养性殿), Hall of Joyful Longevity (乐寿堂), Belvedere of Well-nourished Harmony (颐和轩), and Jingqi Chamber.

To the south of the Gate of Imperial Supremacy, there stands a high glazed screen wall named the Nine Dragon Screen, which is the largest and best of the three famous Nine Dragon Screens in China. Facing north, it is 29.4 m long and 3.5 m high. Built in 1772 during the reign of Emperor Qianlong, the whole scene on the wall depicts nine writhing dragons playing with pearls against a background of the sea and clouds. Figured in high relief, the dragons were painted yellow, blue, white and purple. Yet the one in the center is in yellow and purple, and yellow was a royal color. The Chinese dragon, represented yang, the principle of heaven, activity and maleness in the yin-yang of Chinese cosmology and from ancient times was the emblem of the imperial family. The illustration therefore can be interpreted as representing the emperor as the Son of Heaven.

The wall is composed of 270 glazed tiles. The number 270 can be divided by both nine and five. Nine is the largest odd number, while five is right in the middle of the odd numbers. In ancient China nine and five symbolized the supremacy of the emperor. It is said that the center of the third white dragon was broke when fired in the kiln, which meant a death penalty for the people responsible. In the risk of death, a carpenter volunteered to replace the original with wood and did the carving and painting overnight. At last it passed and saved those involved. One may still find the traces of repair on the third dragon from the left. 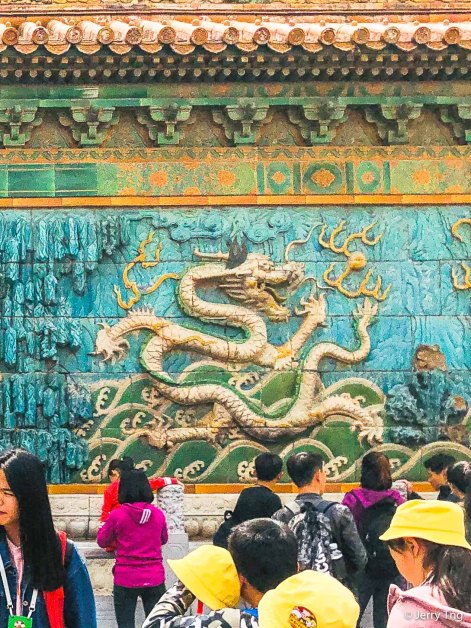 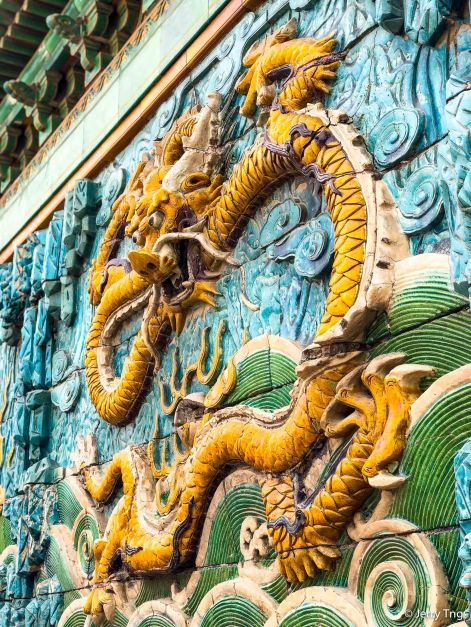 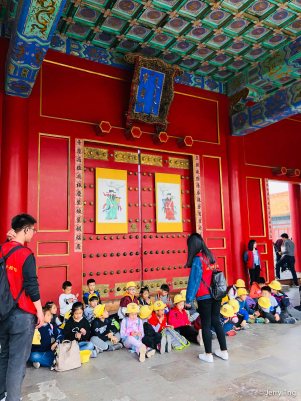 Hall of Imperial Supremacy, a nine-bay-wide building with double-eaved roof, is the place where the Imperial Regent, the father of the emperor, received ministers and officials. 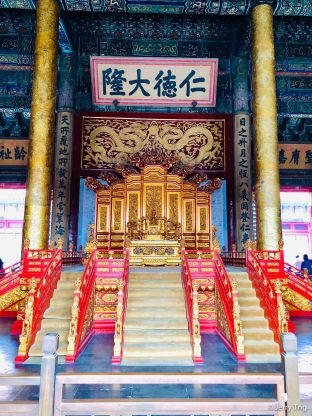 Actually, Emperor Qianlong never lived in this area for his retirement; he just went for a visit or two in his spare time

Constructed in year 1772, the 37th year of the reign of Emperor Qing Qianlong (1736-1795), the Hall of Spiritual Cultivation is a smaller imitation of the Hall of Mental Cultivation (养心殿) with special layout.  Three bays wide and four bays deep, the hall is a structure with yellow glazed and single-eaved roof. It was originally decorated with Hexi-style paintings and decorations. 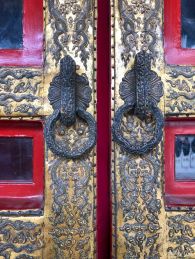 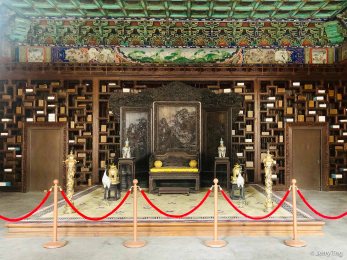 After restoration in the 17th year in the reign of Emperor Guangxu (1875-1908), the decorations and paintings were all changed into Su style except those in the Room of Inky Cloud (Moyunshi). The Hall of Spiritual Cultivation was the sleeping palace for emperors’ fathers. When Empress Dowager Cixi lived in the Hall of Joyful Longevity during Guangxu’s reign, she had breakfast and supper in this hall.

To the north of the Hall of Spiritual Cultivation is he Hall of Joyful Longevity. It came into being in 1772, restored in 1802 and rebuilt in 1891. The hall is seven bays and three bays deep with corridors around. With a total width of 118.60 feet (36.15m) and a total depth of 76.12 feet (23.20m), the building covers an area of 839 square kilometers. It is a building with yellow glazed tiles and single-eaved roof. 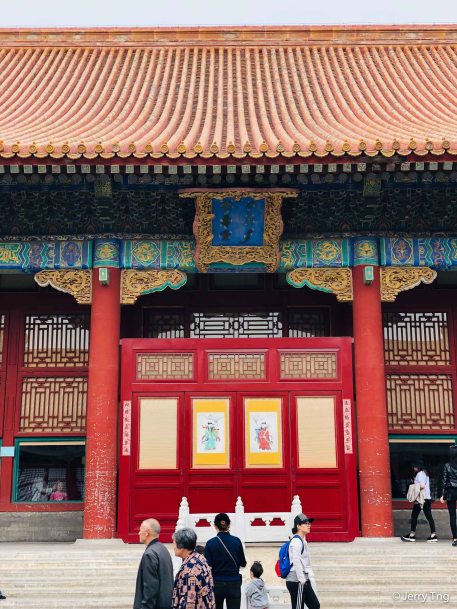 The Hall of Joyful Longevity is masterpiece architecture in the reign of Qianlong. The woodcarving ceiling sets off the interior decoration, giving the hall the air of grace and luxury. Spacious as it was, the hall was where Emperor Qianlong planned to have his study after abdication, hence another name, the Reading Chamber. 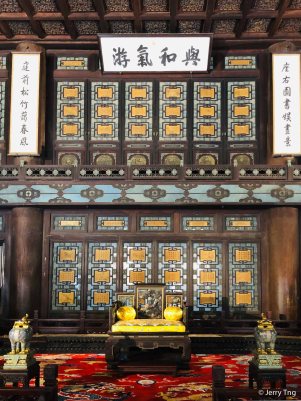 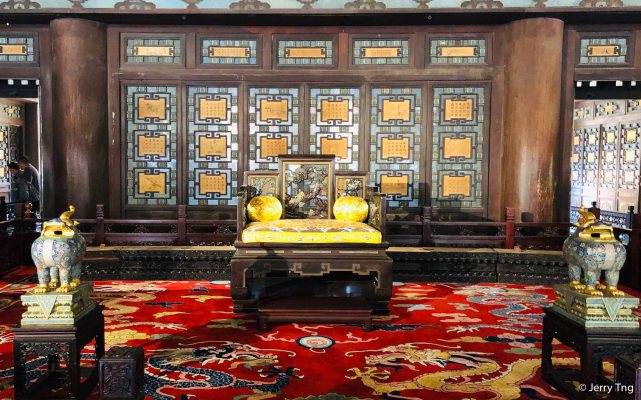 In 1894, Empress Dowager Cixi, having ostensibly handed over power to Emperor Guangxu (1875-1908), lived in this hall too, sleeping in the west warmth chamber. The celebration of her 60th birthday was also held in the Hall of Joyful Longevity. The expression “leshou” was adopted from the sentence “the wise are joyful and the humane are long-lived” in the Analects. 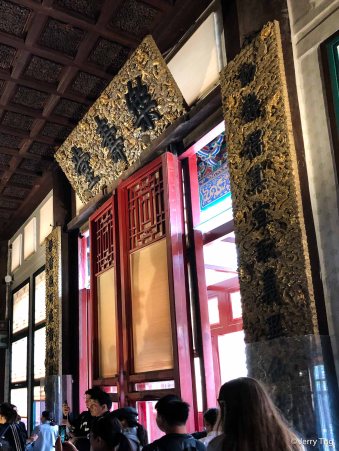 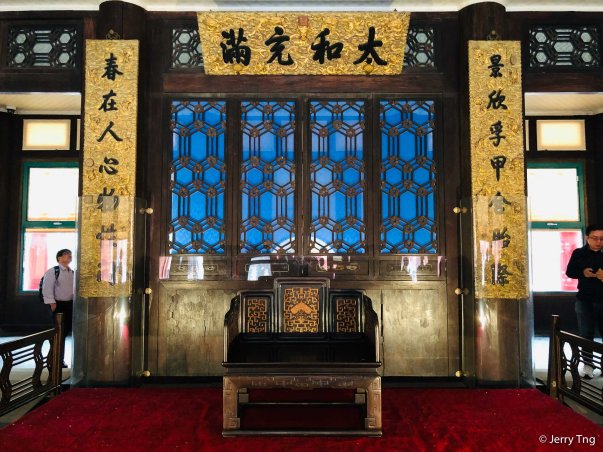 The Hall of Joyful Longevity is now the second chamber. It mainly exhibits clothes and daily necessities used by the imperial household, such as Emperor Qianlong’s imperial robe, the phoenix crown used as a burial object and a priceless ivory mat made of delicate ivory strips about 250 years ago. 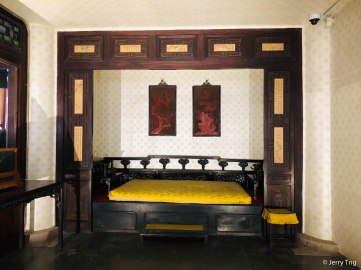 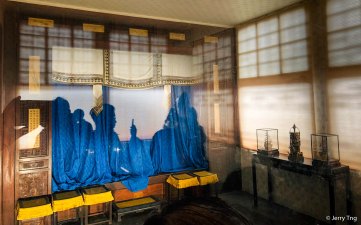 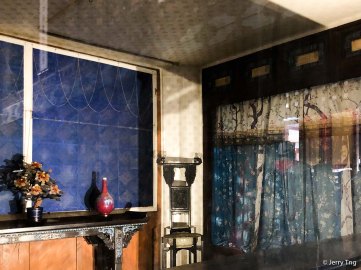 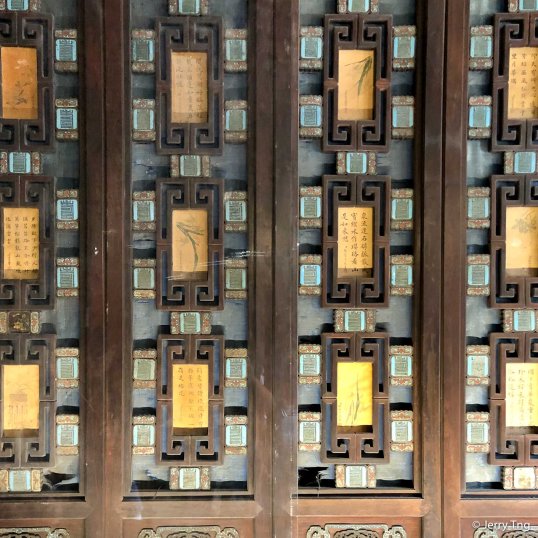 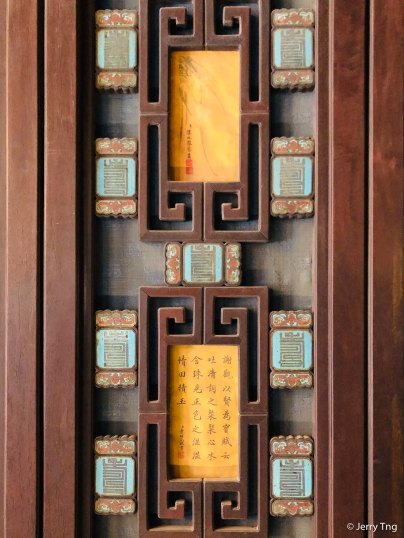 There also placed the largest jade sculpture of the Forbidden City outside the northern gate of the hall, featuring the story of Yu the Great, a mythical leader conquering the floods. Weighing over 5,000 kg, the jade was quarried at Xinjiang, and freighted to Beijing, then to Yangzhou where it was carved. Ten years passed before the finished sculpture was returned to Beijing. The delicately designed and superbly sculpted jade work is the treasure of the nation.

For the Qing royal family, theatre going was the main entertainment activity in the Imperial Palace. Operas were staged on all kinds of festivals, as well as other important occasions, such as the emperor’s accession to the throne, and the birthdays of emperors and empresses. It is documented that at the end of the Qing Dynasty, when Dowager Cixi was in power, she went to enjoy operas here whenever there was a festival. On her fiftieth birthday in 1884, the costumes and properties of the celebration opera cost as much as 110,000 taels of silvers. 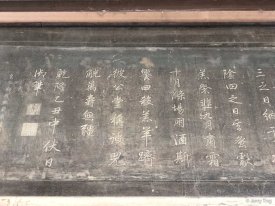 And now, you can admire the fine calligraphy of an emperor that was gifted and trained in the craft. Emperor Qianlong left behind a ton of calligraphy and poems, many of which were engraved into stones and marble slabs by officials sucking up to their boss. These plaques can now be admired along the corridors on both side of the theatre. 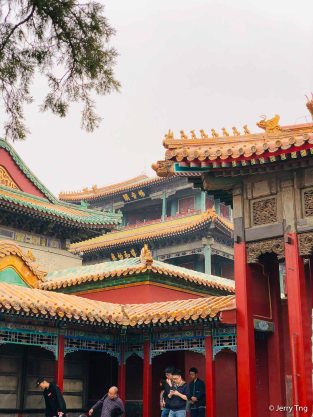 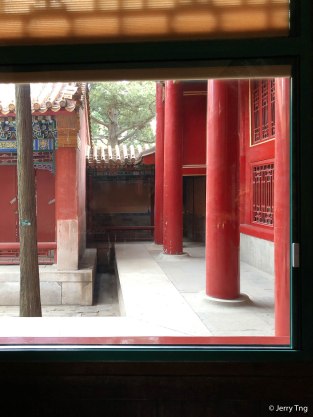