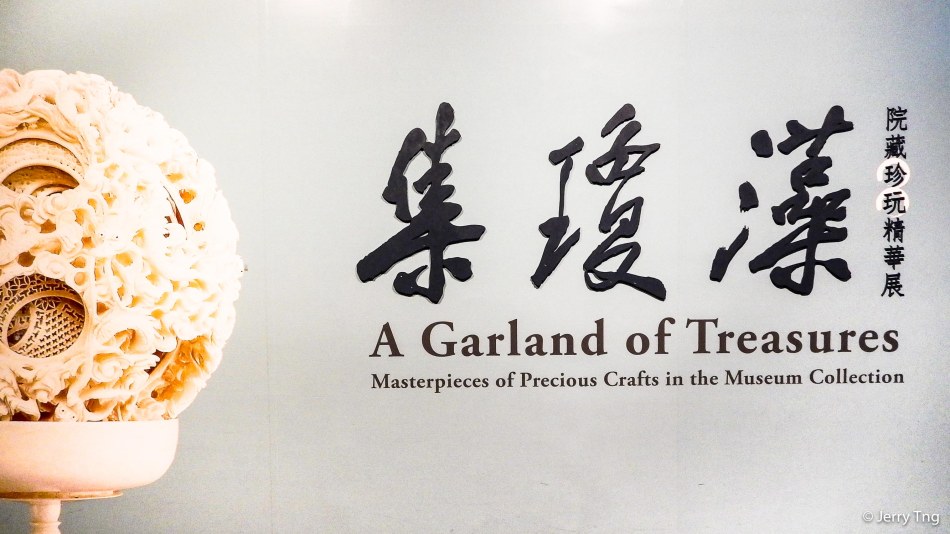 When you are the Emperor, you have the whole country at your beck and call – the best artisans, all the precious stones and rare material that you need. And when Emperor Qianlong wanted specialised boxes to keep his curios, guess what they did.

These curio boxes 多寶格 were originally used for scholars going to Beijing for their imperial exams, for them to organise and keep their stationery and books. And after they became successful, these boxes were repurposed to keep curios and collectables when they went on a trip.

These are nicknamed “Emperor Qianlong’s Toy Boxes”. Each one of these boxes is a work of art in itself. Each one served the original purpose to provide a home for the precious object, but each one has intricate designs on the box, in the box and around the mechanics of the box.

There are official Qing records that have specific instructions from Emperor Qianlong on how he wanted these boxes to open up, how the objects were organised. Then the artisans made them into work of arts based on those instructions.

However, it is the contents in the box that dazzled the beholder. These are some boxes that have the best examples of curios that are kept in them.

“A Garland of Treasures” wood box「集瓊藻」多寶格木匣

This is the box that the exhibition is named after. 瓊藻 can be translated as ‘jade’ and ‘seaweed’ between placed together means “abundant treasures”. The origin of the phrase was from Song poet Xie Zhuang 謝莊, “叠雪翻瓊藻” meaning “treasures as plentiful as the falling snow”. Qianlong was an excellent scholar, and he named this box “A Garland of Treasures”「集瓊藻」for the wonderful pieces kept in it that gave him a lot of pleasure and delight.

Kept together with the box was an index that compiled all the contents of the box. Among those mentioned on the first layer were Xuan kiln blue glazed water container 宣窯青花水盛, white jade brush holder 白玉硯山, Duanzhong ink stone from Song dynasty 宋端溪鐘研, etc.

All these pieces are kept in two wooden boxes with two layers each. And then these boxes fit perfectly in a Japanese Maki-e lacquer box decorated with embedded bones and shell that formed the pictures of intertwined flowers. Under the cover, it was embedded with the manufacturing date of the box : 集瓊藻乾隆辛酉年裝」”Assembled in 1741, the 6th Year of Qianlong reign”.

73 pieces of precious artefacts from as far back as Tang dynasty are stored in this one box, according to the index.

Maki-e 蒔絵 or “sprinkled picture” is Japanese lacquer decoration technique in which lacquer is applied with a brush to draw pictures, patterns and letters on the surface of lacquerware. Then, while the lacquer is still wet, metal powder such as gold or silver is sprinkled on the design to fix it on the surface of the lacquerware. This art form is still made by artisans in Kyoto, Japan today. Here’s a video example of how maki-e is made.

This curio box contained 40 pieces of handicrafts made with jade, precious stones, etc.

The box is a rectangular box with a top, a one-piece cover, and a three-layer box inside. The inner box is red lacquered polished base, coloured lacquered flowers, and gold sprinkled inside. The outer box is carved with red lacquer based and filled with gold contour lines, and then painted with colour lacquer. The diamond-shaped metal lock leaf is inscribed with the phoenix pattern.

The lid of the box is made of red-brown lacquer, and the side is decorated with golden lotus patterns. The lid is inlaid with various colors of jade, materials and lacquerware. The jade gourd bottle is written with the word “大吉” with blooming daffodils, pomegranates, chimes, etc. to form the sight of the Spring Festival. The inner panel of the box is made of red sandalwood, embossed with vase flowers, ruyi, incense burner and other faux auspicious patterns.

Other boxes were found that consisted of over 100 of pieces of “second grade” curios and a cupboard with thousands of pieces of “third grade” items.

After looking at the exhibits, I was wondering why it was so familiar and comforting. When I was much younger than today, I had a pencil case that opened up into multiple compartments for me to organise the pens and pencils and erasers in their respective places.

My friends and I used to pretend these were our warships and the pens were guns and eraser bits the ammunition. Now I know where the inspiration of the fancy pencil case came from.

And no, I didn’t have a pink pencil case.