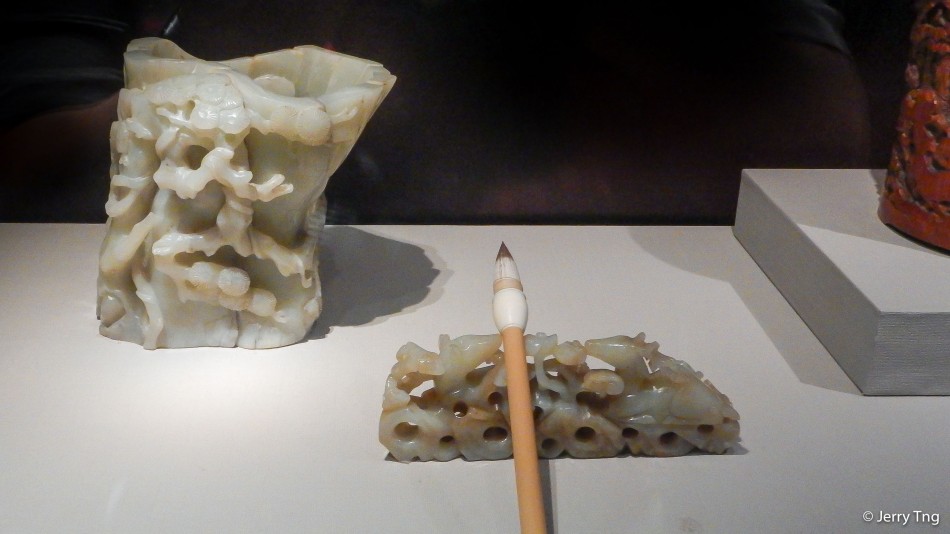 “Garland of Treasures” 集瓊藻 is the name of a treasure box that Emperor Qianlong owned and kept some of his favourite curios. This permanent exhibition at the National Palace Museum displayed some of the best treasures from his collections.

These boxes were originally used for scholars going to Beijing for their imperial exams, for them to organise and keep their stationery and books. And after they became successful, these boxes were repurposed to keep curios and collectables when they went on a trip.

So let’s start with the original purpose – stationery.

文房四寶 Four Treasures of the Study

We refer to brush, ink, paper and ink stone as the four treasures of the study. And over the years, these items have been the collectibles by aficionados.

And every study would need to have the basic four items called the Four Treasures 文房四寶 – 筆墨紙硯 brush, ink, paper and ink stone. As scholastic achievement was placed above all other achievements in feudal China (and some would say even in modern China), these basic stationery can become very extravagant as the users advance in their careers (and wealth).

The carved wooden plaque is embedded with two pieces of jade carved with a boy pattern. The wood carvings on both sides are matched with jade carvings, and they are combined into a picture of nine children in a garden teasing a baby resting in the shades of the banana tree. Under the wooden seat, there is a poem written by Emperor Qianlong in the Li script 隸書 in 1754 (19th year of his reign):「七情之發真惟孩，童子嬉戲良可咍，以手捫目臨虛階，蕉陰竹蔭青雀嵬，玉人抱璞雕奇環，睢睢于于意自佳，蒙叟所謂天全哉。乾隆甲戌秋御題」

This work is round and straight, with three legs underneath. The outer wall is covered with white glaze. It is written on the imperial poems made in the first year of Qianlong. The interior and bottom of the vessel are painted with lake green glaze. The rim is painted with gold color. “Qianlong reign” seal is affixed on the base. There are six imperial poems written in ink on the surface, all of which are lyrical chants. This shows that Qianlong imitating the romantic literati, “reminiscing about the scenery, expressing the thoughts into the setting the sun”. Frankly, Qianlong’s poems were quite bad that they were all left out of the curriculum for Chinese literature studies.

The whole vessel is taken from a section of thick bamboo stem, and one end is left as the base of the vessel. The picture carved on the bamboo is the story of the legendary Tang dynasty general Guo Ziyi defeating the enemy without using force. 郭子儀免冑圖 “General Guo Ziyi removing his armours” depicted the scene when the enemies of the General in full armoury bowing in defeat in front of a civilian dressed Guo Ziyi, demonstrating the respect his opponents have of him.

The patterns on bamboo carvings during the Jiading period in the late Ming Dynasty were mainly landscape figures, pine trees and mountain stones. The main motif of this bamboo brush holder was no different. This is the work of one of the leading bamboo carving family known as 嘉定三朱 “Three Zhus of Jiading”. The three generations of artisans are great painters and calligraphers, but it was their bamboo carvings that the collector world sought after. This was an example of their work, but it was not know which Zhu carved it.

水晶筆架 Rock crystal brush stand in the shape of a mountain