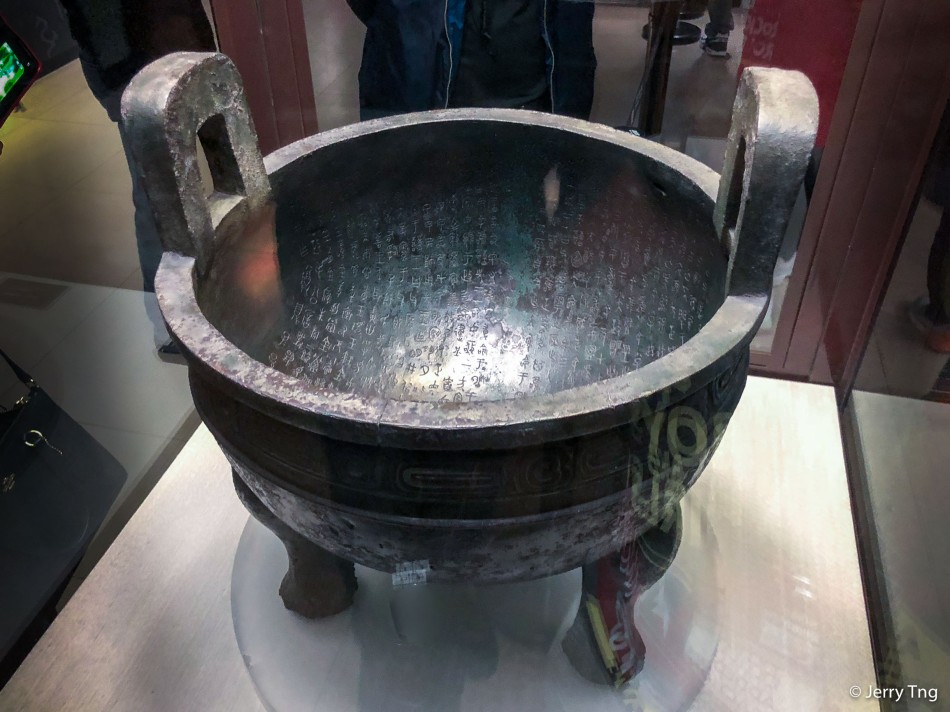 The Mao Gong ding was excavated in Qishan County, Shaanxi province in 1843, during the Qing dynasty, Daoguang Emperor’s reign. Together with the Da Ke Ding 大克鼎 in Shanghai Museum and Da Yu Ding 大盂鼎 in National Museum of China, Maogong Ding 毛公鼎 is considered one of the 3 most important relics from ancient China.

Mao Gong Ding, the bronze tripod cauldron, was excavated at the end of the Daoguang period (1821−50) in Qishan County, Shaanxi. Dings were used widely as ritual vessels and became hierarchical symbols during the Zhou dynasty (circa 1046−256 BC). This is the most famous ding, originally belonging to Mao Gong. There are 497 characters on the inside of the vessel, the longest bronze inscription known to this day.

This “ting” cauldron has a wide, flared mouth, a linked ring motif decorating the rim, upright handles, and three hoofed feet. The inscription, which can be divided into seven sections, describes how when King Xuan of Zhou came to the throne, he was anxious to see the country thrive, and charged his uncle, the Duke of Mao, with governing the domestic and external affairs of state, big and small, and to do so conscientiously and selflessly.

The inscription goes on to state that the King then presented the Duke with official vestments and gifts, and that this vessel was cast in order to record the honor given to the Duke for his descendants.

“The inscription text bears witness to the ‘King Xuan restoration’ in Western Zhou history [i.e. revitalization after the ascension of King Xuan, ending the Gonghe interregnum]. The first part of the text consists of King Xuan’s instructions to the Duke of Mao. The middle portion recounts how the King, upon taking the throne, fondly recalled how the King Wen of Zhou and King Wu of Zhou had enjoyed the Mandate of Heaven and established the kingdom, as well as the King’s vigilance and apprehension over inheriting the Mandate himself. The latter part lists in detail the generous gifts the King had bestowed upon the Duke of Mao. In closing, the Duke of Mao expresses his gratitude to the King, and presents the ding as an expression thereof for future generations.”