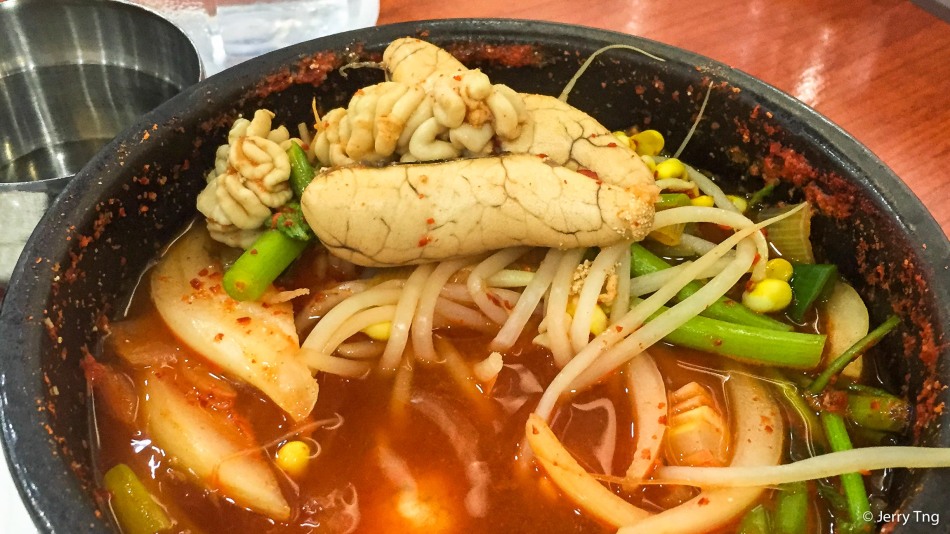 Another day in Seoul, another day of blind tasting because I cannot understand Hangul. But a restaurant sign with a motherly figure cannot be too wrong.

It was wonderful that I eat almost anything that can walk, swim and fly. When I walked into Mother Hwang Tae 어머니황태, I had absolutely no idea what they were selling.

OK, there was no other customer in the restaurant as it was really not meal time. Luckily they had an English menu as the shop was situated in Coex Mall and therefore would have it’s fair share of walk-in tourists.

Once I had ordered, the customary banchan was placed on the table. This was not a luxurious spread, just five items.

Haemul Jjim (해물 찜) Steamed Seafood, despite the name, tasted like stir-fry than steamed. But the technique was to stir-fry the mixed seafood (mainly squid) with a liberal amount of Gochujang with bean sprouts and minari. I have not idea why it was called steamed.

The main attraction was the Al Tang (알탕) Spicy fish roe stew. Al is fish roe in Korean. It was served in a eastern pot that was heated and the soup was boiling hot.

After it boiled over, the soup revealed itself. The main ingredient for the soup based was Korean spicy red chilli paste or Gochujang. I find the fish roe over cooked because of the heavy boiling.

Very unpretentious restaurant with food that your Korean mother would prepare at home.

0 comments on “My mother was a good cook”