Maha is a stylish Middle Eastern restaurant with incredible degustation choices and  is located in a hidden alley in CBD area. So it makes for an excellent location for a business lunch.

Opened in 2008 (and named after Chef and owner – Shane Delia’s wife) Melbourne’s Maha restaurant is renowned for its fresh, contemporary Middle Eastern menu with a cutting-edge style that has resulted in Maha earning One Chefs Hat in The Age Good Food Guide annually since 2009. Using a fresh, innovative and unrestricted approach with Mediterranean influences, Maha skilfully redefines this ancient cuisine through modern dining.

Maha’s owner/chef Shane Delia is these days best known as the star of SBS cooking show Spice Journey and for occasional appearances on Masterchef. But before all this, the smiling Maltese-Australian was earning his stripes in haute cuisine at the Sofitel’s Le Restaurant, among other places.

Shane is Maltese by birth and has always had a deep connection and love for the Middle East. It is not only in his bloodline – he is Phoenician (an ancient civilization located along the coast of the Mediterranean Sea), but his wife is Lebanese. The restaurant style is communal, influenced by Shane’s upbringing within his large Maltese family where food was as much a chance for people to gather and eat with the comfort of love and a shared history as it was a meal.

That experience shows. It’s seasonal so always features what’s fresh and tasty during the seasons. The flavours and textures at Maha are familiar, but they’re assembled with more finesse than you’ll be used to. The kitchen spins chickpeas, tahini, nuts, saffron, preserved lemon and other Middle Eastern staples into dishes that are balanced and pretty without being overly fussy. Though its roots are Middle Eastern, halal it is not.

When our Meze course was served, all come at the same time and we had these variety of appetisers come in smaller plates for sharing.

The meze plate to begin with was of varying quality, ranging from outstanding pickled carrots to some bread that could have done with a little more time in the oven, but nevertheless well presented and substantial in size.

Fel fel is a Persian spice with pepper and capsicum pepper notes. A mixture of dark and green olives that had a bit of a spicy kick, particularly easy to keep going back to.

Hummus, sesame & preserved lemon butter, flat bread was possibly the best hummus I’ve ever had. Shane Delia explains the best hummus is simple hummus – don’t overcomplicate it. Show restraint. Use quality ingredients. Perfect with the flat bread to mop it up.

Fresh pickled carrot which we kind of underestimated in the first look but it is not your average carrot with yogurt. You have to try yourselves to understand the complexity of flavours in this seemingly simple appetiser.

Just look how amazing these eggplant filled buns with Persian XO sauce look, and they taste even better. The bun are so soft and tad bit chewy, and filled with flavoursome eggplant inside. Eggplant taken to next level with these fried beauties. You have to give it up to the Middle Eastern to perfect the cooking of eggplant, and the varieties they can think off. And topped off with Persian XO sauce made from fermented shrimp paste with turmeric and saffron.

Thinly sliced and cured beautifully without too overpowering and the texture is just perfect.

Saving the best for last, the roasted wagyu scotch filet is crispy on the surface but tender and moist under the skin. A Middle Eastern take on the classic French steak au poivre, the wagyu scotch fillet is served with olive oil whipped garlic and burnished onions.

Be careful when you serve this to little children though. The little black pebbles under the beef is REALLY little rock pebbles and are not edible. And don’t attempt to scoop it to your own bowl too 😉

I loved the seafood on the cous cous as I could not imagine using cous cous like a pasta.  The course is fresh and delicious, and the whole thing just right with rich flavours from spices.

The 12 hour roasted Mt. Leura lamb shoulder was tender and easily was pulled apart. This reminded me of the lamb for briyani as it was paired with the spiced aged rice.

This was the only down from the whole meal. I would expect a bolder take on the salad, given the excellent meal I had so far.

The basmati from the foothills of the Himalayas is aged a minimum of two years. This aging process intensifies the aromatic qualities of this rice dramatically. As the rice ages, moisture/water evaporates away, increasing the oil’s role in the flavor profile. This rice is wonderful when steamed with aromatic spices like seven spice, cloves, cinnamon & barberries. The nutty flavour and firm texture go well with spicy curries.

Biryani is a dish fit for a king and its origin is largely credited to Persia. The delicate layering of rice interspersed with spices and meat or poultry relies on a special Persian steaming method known as dam pokht (or dum pukht if you are from India), meaning “steam-cooked”. There are many variations of biryani from India to Pakistan, but authentic versions have no chilli in them whatsoever – just aromatic spices such as luxurious Persian saffron.

Paring combinations like pumpkin and tahini ice cream for dessert sounds strange but it was earthy and beautiful.

The Turkish Delight doughnuts were delightful golden puffs. Ethereal in texture, the doughnuts were coated in rosewater honey and roasted walnuts and tasted delicious. 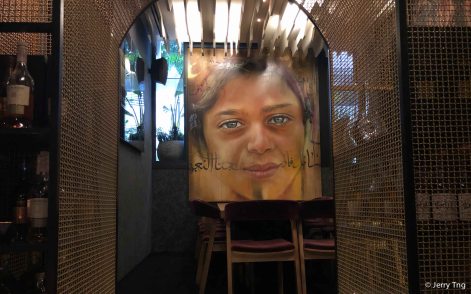 We went to this venue for a work lunch. The venue was hidden down a side alley. Down the stairs we went. The surroundings were plush, warm and comfortable. There were subtle smells of spice and unami in the air.

Maha turned out to be a great experience, not just highlighted by the plethora of new flavours and tastes, but it was also an adventure, which dining really should be. Superb service, outstanding decor, truly magnificent food.

Maha Restaurant is located in a sub-basement venue on Bond Street in the Melbourne CBD. Look for a glass ‘touch to open’ door with the Maha logo on it.