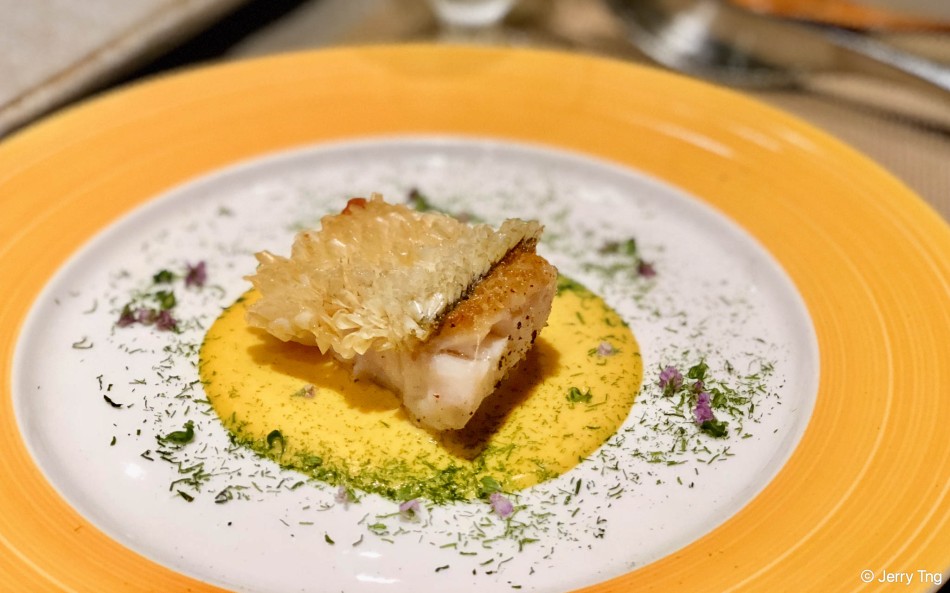 One of my favourite meal in Teppanyaki. Not the gimmicky Benihana style ones, but a culinary theatre with good food and excellent techniques. IM Teppanyaki was the first Michelin starred Teppanyaki in Hong Kong. I tried it as soon as I got the opportunity.

Since opening in 2013 on Tung Lo Wan Road, Tai Hang, IM Teppanyaki has been operated by Lawrence Mok, a renowned Teppan chef with an illustrious culinary background spanning over 40 years. Since then, it has received a recommendation from the judging panel of MICHELIN Guide Hong Kong Macau every year. In 2017, it was awarded a one Michelin star to become the only Michelin-starred Teppanyaki restaurant in Hong Kong. Combining Japanese aesthetics with contemporary interior design, Japanese ambience with contemporary design, the cozy venue seats around 20 people. Every customer gets to sit around a Teppanyaki counter with the opportunity to relish the wonderful artistry of the chefs.

They used to allow customers to choose their own grill chefs, but since the star was awarded, the waiting list was super long for Mok-san so they stopped that practice. And unlike many other starred restaurants, the executive chef retreated to the office. Mok-san still helms the grills. We were lucky to have the charismatic Mok-san through the normal rotation.

I did not know when it started to be so, but it always started with sashimi.

Uni was placed on top of Botan prawn and topped with a clean tasting caviar that paired well with the umami of the uni. The gold leaf was very much for presentation purpose as always – did not enhance the taste in any way. Paired with a celebratory sake, we embarked on a culinary journey with Mok-san.

Shimeiji mushroom caps were placed in a scallop half shell with bonito sauce. A perfectly grilled Hokkaido scallop was then placed together with the skirtings. Finally the assembly was drizzled with a butter miso sauce. While the taste was fantastic, it was a busy plating.

Awabi cooked on the grill and topped with a seaweed abalone liver sauce. The abalone was tender but this mollusc had to borrow the taste from the sauce because abalone meat was a rather tasteless.

Chinese technique would prepare an elaborate sauce for the abalone. Mok-san just used the liver of the abalone and seaweed to prepare a creamy, umami-rich butter sauce with the abalone.

Amadei or Japanese sea bream is a prized fish that the would only be eaten during festivities. Here, Mok-san has created a signature dish which demonstrates his creativity and depth in culinary skills. The fish itself is delicate and clean tasting – nothing out of the ordinary – but what makes this dish stand out is the crispy scales that are painstakingly deep fried for added texture.

To achieve this, the fish is shallow fried skin side with the scales intact. It has to be the right fish. If the scales are too big it doesn’t flake up and too small, the scales will fall off. The oil has to be a certain temperature and the chef used a laser thermometer to ensure the perfect cooking conditions. Served with uni cream sauce and edible flowers with a hint of cumin flavour and dried nori.

Topped with a “golden sauce”, it reminded me of Chef Eric’s of Mikuni special golden sauce he used for his crustaceans creations. Mok-san came later that year when I had this meal to Singapore for an epic collaboration of two great Teppan chefs.

The grilled crab was sweet and succulent, and smokiness of grilling went well with crustaceans like crabs. That’s why we always have prawns and crabs and lobsters for BBQ. However, if there was one dish for this dinner that would not made the grade, it would be this.

Highlight of the dinner, the A5 Japanese premium beef served with a pinch of Himalayan pink crystal salt and wasabi. Beef used was 米沢牛 Yonezawa beef from Yamagata Prefecture. For me, the item that stole the show was the Japanese imported garlic that had been toasted to a crisp. It had a nice floral taste – almost with a hint of cumin spice.

Needless to say, the beef melted in the mouth with its perfect marbling. But one could not eat more than what was given because of the richness. Cut into cubes and slices so that we could enjoy the different textures and cooked medium-rare, each mouthful was juicy, tender and melted in the mouth leaving behind a lingering fragrance. Thankfully it was paired with freshly grated wasabi and crispy garlic, something I have not seen outside of Japan. Usually the beef was drowned unnecessarily in sauce because of sub quality, but it wasn’t the beef we had. Did I mention that this one really melted in the mouth?

The beef was an excellent match with the fried rice, miso soup and pickles – the fried rice was cooked with a bit of ginger and while not overly oily, was a tad undersalted. I was too shy to ask for more salt.

The miso soup cooked with clams was warming and richly flavoured that we finished every single drop in the bowl.

We ended our meal with a wedge of Japanese musk melon.

Overall, the experienced teppan chefs in the restaurant let the top-notch ingredients shine for themselves, only using their dexterous grilling skills and limited seasonings.

IM teppanyaki is not the kind of restaurant with a stunning panoramic view of the harbour or invaluable art pieces on the walls, but it would be unnecessary as its true charm lies in the wonderful artistry of the grill chefs at the two teppanyaki counters.

There weren’t any high-flying acrobatic dishes at IM Teppanyaki – Mok-san let the food speaks for itself. We’ll be back for more – as soon as we finish digesting this praise-worthy eight-course meal.