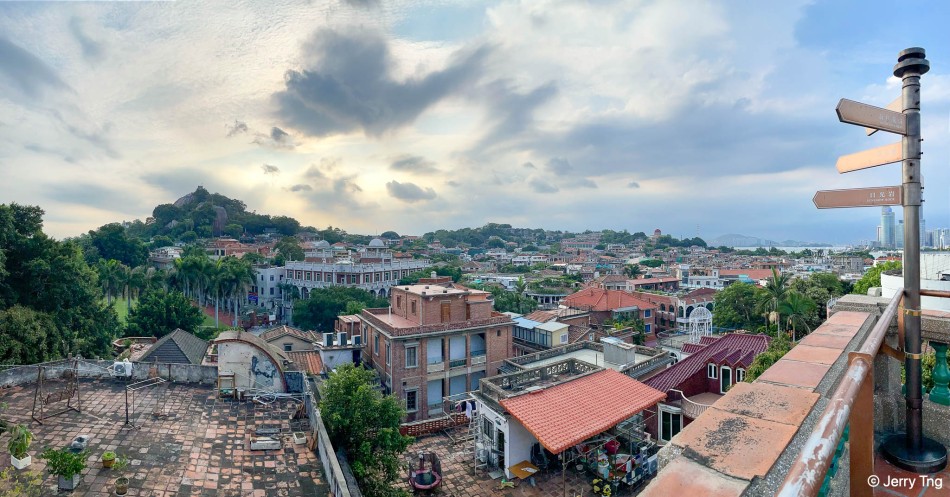 Many are familiar with the term “Amoy” – you have seen it on soy sauce bottles (Amoy 淘大), names of roads in Singapore and Malaysia (Amoy Street). But do you know where it comes from?

Xiamen was called Amoy in the local dialect, and many overseas Chinese left to seek their fortunes from the ports of Amoy from mid 19th century to the early 20th century, escaping from the collapse of Qing dynasty, civil wars that ensued as well as the Sino-Japanese war that followed. Some of those landed in Philippines, Indonesia and Malaya, made their fortunes and went back to Amoy to rebuild their hometowns. One of their favourite locations to show off their wealth was Gulangyu.

On the island are many bungalows and villas left behind by overseas Chinese that have returned to build their holiday homes away from their adopted homes. Many of the doorways still bear the surnames of the previous owners of these beautiful houses.

The old Lin Mansion is made up of five independent and uniquely decorated villas. The original three were Victorian style villas, while the last one to be built was a five-storey Baroque style with octagonal windows.

This has been converted to a hotel and one cannot enter without a reservation. But if you want modern comfort in a historic building, an experience like Raffles Hotel in Singapore, this would be one of the best one on the island. It is rated as 3-star, but local guides will tell you it’s 5-star and charge you as such. Hotels and lodgings on the island are expensive, but Lin Mansion Hotel can be booked online at a much lower price. You can see the interior of the hotel at their Weibo account.

This is a cluster of three villas, belonging to the “Timber King” Filipino Chinese Dee C. Chuan 李清泉 (1888-1940). He was originally from Amoy, made his fortunes in the Philippines and came back to build these mansions. One of them (No.38-40) is converted to a luxury boutique hotel. No.42 is converted to a souvenir store.

Dee was a patriotic Chinese that had contributed to the war efforts in World War II. Together with Tan Kah Kee 陈嘉庚 of Singapore and Zhuang Xiyan 庄西言 of Indonesia, they formed the “Nanyang Overseas Chinese Save China League” 南洋华侨筹赈祖国难民总会 to raise funds for the war efforts. All three of them were from Fujian province but left for Southeast Asia, which was called Nanyang (“south of the ocean”) to seek their fortunes.

The door way was typically of the motifs that these rich towkays (term for bosses) like – dragon and phoenix. This is the Nationalist period of China, the emperor was no more, so the commoners can decorate their houses with imperial motifs like dragons and phoenix.

This was a good toilet stop (really clean toilets with working taps) and the rooftop has one of the vantage point of the island. I used the photo I took up there as the banner of this post.

It has a really interesting translated name – Hi! Heaven! The Chinese name is 海天堂构 Haitiantanggou and is made up of individual words – 海 (hai) sea, 天堂 (tiantang) heaven. But that’s not the right way to divide the name because I could not find any reference to 海天堂 except to the Guilingao store.

海天 haitian came from the phrase 海天一线 meaning the horizon. 堂构 tanggou came from the ancient history text of Shang Scripts 尚书, and it means “following in the father’s footsteps”.

It was later used to also mean grand structure.

Together, I think the owner was trying to convey the hope that the descendants will follow the footsteps of the successful billionaire into the horizon, or simply, the compound was so big that it stretched to the horizon.

The gate tower is a typical traditional Chinese style, with double-edged arches and angled cornices. There are five villas arranged symmetrically along the central axis, three of which are currently open for public.

It was built by Huang Xiuwen in 1921 , a Filipino Chinese, and is one of the ten grandest villas on Gulangyu. He purchased the original site of the Foreigners Club and built an eclectic mix of architecture that’s a combination of Chinese and Western styles.

The main building No. 38 is now the Gulangyu Architectural Art Museum. You can also see how the folks lived during that era. I was surprised that they could make ice cream and cold drinks. And while Western perfumes and makeup were popular, the women still liked to use the local whitening powder that my Mom used to use as well.

If you think that the floor tiles look familiar, yes they are Peranakan style tiles that are popular in Singapore, Malacca and Penang. These are now known in China as Minnan 闽南 (south of Fuijian) style tiles made popular by these returning Chinese merchants.

In the centre of the second floor is the treasure of the town house, a statue that looks like Guanyin on the front and the Virgin Mary on the back. Also special was that Guanyin was holding a ship’s wheel instead of a vase, representing the blessing of all the travellers (given that the main mode of transport was the ship).

No. 34 was built into the largest independent bookstore on the island called the Wormhole Bookstore. This quaint bookshop is an excellent place to spend a quiet and peaceful afternoon. No. 42 is the performance centre of Nanyin 南音 (“Southern Sounds”) and traditional Hand Puppets 布袋戏. Nanyin performances were considered royal performances “御前清曲” “Yuqian Qingqu”, while the puppet show was a childhood favourite of many Taiwanese.

China Record Museum is the first vinyl record-themed museum in China. It is housed in a 100-year villa called 黄荣源堂 “Huang Rongyuan Hall”. It is curated and operated by the China Record Group.

The architectural style is a combination of European, American South, Chinese classical and modern styles, a complete rojak of style typical of the manner most of these mansions were built because of the varied background these owners had. It was nicknamed the “White House” because it was completely white when it was first built.

On an island with over 391 gazetted UNESCO cultural heritage buildings, I cannot visit them all in one afternoon. But some of the main ones are described in this post as well as another one focusing on foreigner owned ones.

You have to look carefully or you will miss it. Walking towards my lunchtime place from the cathedral, right at the corner is the old Bible Society and Christian Bookshop of South Fukien 闽南圣书公会圣教书局. The population of Gulangyu was primarily Presbyterian, with some Seven Day Adventists and Catholics, due to the numerous missionaries that came and setup churches, schools, clinics and hospitals here.

The arches and windows made very interesting owl motifs, but this building is currently the Foreign Picture Bookstore 外图书局. The building was completed in 1920 and was the office of Asia Oil Company 亚细亚火油公司. After the founding of PRC, it was converted to a stationery factory. In 2016, Xiamen Foreign Books Publishers took over and converted it to a beautiful bookstore. Recommended pitstop as it also houses a teahouse.

Gulangyu was known as ”Island of Piano” and brought in the first tempered piano to China in the late 19th century. Since then, many more pianos were brought to the islands by the different embassies and rich merchants. Learning the piano became the must-do activity of daughters of rich family. It was said that everywhere you went in the evening, there’s always the sounds of piano playing from the windows.

Longshan Tunnel 龙山洞 is an air raid shelter built during the Nationalist period. It’s only around 400m and was used as a market before cleared out to the current look. It is one of three tunnels built for this purpose when Xiamen was air raided by the invading Japanese. Xiamen suffered tremendous damages. Fortunately for us, the island was spared.

After walking around the whole day (skipping breakfast and lunch), I felt famished and needed some nourishment before leaving the island to head to the airport for my next Chinese city. And the local guide recommended to explore the local town centre where all the local street foods were represented.

Located around the civic centre is the modern town square. This place was developed as a result of the influx of tourists. People come here not for the sights but for food. Especially after such a long walk around the island, this is the best place to seek for nourishments.

Of course, all along the way to the town square, you will be spoiled for choices for all kinds of street foods. But not all of the are of local origins. Many came and set up shops here to share the tourism pie. And many were influenced by the night markets culture of Taiwan, offering innovative snacks for the Instagram crowd. I usually skip these, because they are either sweets or just not tasty.

I settled at the recommendation of the guide at a shop away from the crowd, which was empty except for locals ordering takeaways. Locals patronizing this shop, it could not be too bad.

Left to right, bak chang, ngoh hiang roll, Fuzhou fishball, and satay noodles. The first three are Hokkien favourites, and tasted similar to the ones you will get in Singapore. Satay noodles was considered something exotic and a must have when visiting the island. It does not taste like the satay we are familiar with. The soup base purportedly was made from satay sauce. But it tasted like laksa to me. The noodles was the familiar yellow noodles that we have in Singapore, something that is unfamiliar to those in China.

Sea worm jelly 土笋冻 is a Quanzhou specialty. It is made from boiling sea worms to extract the natural gelatinous collagen from the mollusc and then leaving the liquid to cool and form the jelly. It is usually eaten as an appetiser with shredded cucumber, ginger and a dash of vingear and chilli oil. Acquired taste, but quite delicious – a bit like Teochew pig skin aspic.

Oyster omelette 蚝仔煎 can be found in everything night market of Taiwan, and it has found its way back to Gulangyu. But this example was horribly done.

And as dusk falls, the lights came up and it gave the island a romantic mood. Many houses were converted to restaurants with courtyard seatings. You have been warned, they are bloodsucker – insects and mosquitoes abound in summers, and some of the fresh seafood shops were not exactly honest.

The island is no longer a quiet enclave of the rich and famous. It is now a major tourist attraction and a UNESCO Cultural Site. Because of this status, the once quiet cobblestone streets and backlands are constantly filled with tourists, and the locals are all moved to one corner of the island as the prime locations are either used as hotels and restaurants or torn down and rebuilt to villas for the nouveau riche. One thing that remains constant, the island is still the playground for the rich, the locals are still struggling to keep up.