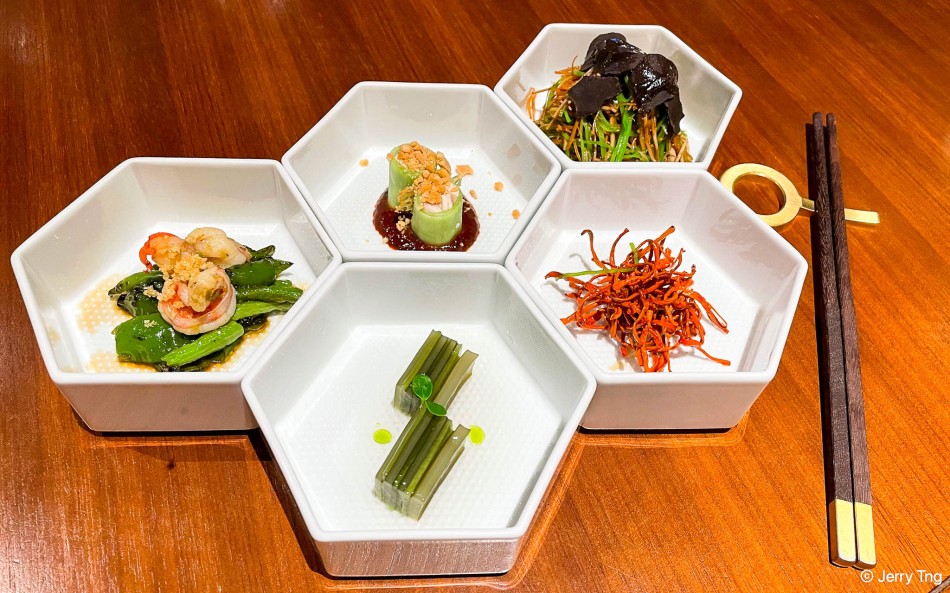 First visit to Chengdu after almost 4 years, I was delighted to find this excellent fine dining place with the signature of one of my favourite chef, André Chiang.

The Bridge, on Chengdu’s historical Anshun Bridge directly opposite Shangri-La Chengdu, is the first restaurant on mainland China from Taiwan-born chef André Chiang (who was behind the Asia’s 50 Best high flyer Restaurant André, now closed). Although he is just the Creative Director of the restaurant, he single-handedly turned Sichuan cuisine into his own, with his trademark Octaphilosophy incorporated into the menu.

Depicted in the Travels of Marco Polo, the origins of the bridge can be traced back to the 13th century. Marco Polo described the bustling activities along the two banks and the tax collection office on the bridge. The restaurant itself was rebuilt on top of the ancient bridge by Architect Lyndon Guo after the original bridge was bombed in WWII.

A traditional Sichuan-flavoured set menu takes guests on a culinary journey in the style of a Chinese banquet. Classical dishes using local produce are twisted by executive chef Li Shunhong with modern gastronomy, playing with textures and spices to bring Sichuan into today’s food scene. There are even some obscure historical recipes resurrected, albeit molecularly, for the meal.

A British chef of Indian descent, Fuchsia Dunlop, once defined Sichuan cuisine into 23 basic flavours. The Bridge came up with one more – pickled peppers 泡椒. And like the typical Sichuan family, The Bridge does its own pickling of different vegetables and fruits to prolong their shelf life. The pickling juices are then used to give the different dishes their unusual flavours.

叶儿粑 Yeerba is a Sichuan snack made from glutinous rice flour, usually filled with something sweet like red bean and wrapped with leaf. The rice ball is similar to Japanese mochi in texture, while the main difference is that yeerba is made from flour and mochi is beaten into form from whole rice.

The degustation started with a savoury version of the yeerba using 腊肉 chopped waxed meat as filling and Yunnan sourced caviar as topping. The yeerba was grilled with its leaf wrapping to impart a faint but distant grassy fragrance and smokiness of the charcoal. The entire amuse bouche was held together with pickle juice.

Next up, four distinctly different appetisers.

This is a signature appetiser that has been on the menu since the opening. Fungus floss is also known as cordyceps flower or cordyceps militaris and has similar medicinal properties as its uber-expensive cousin, the cordyceps. It was dressed with Sichuan bean sauce and has a crispy texture.

I though the filling was cream cheese, but it was minced chicken with sesame paste filled in a cucumber roll. Served with beetroot chutney and crushed peanuts.

Layers of kombu and celtuce marinated with a kombu and pickle brine, this appetiser was reminiscence of those Chinese banquet appetisers of seaweed ribbons and jellyfish. Hints of Sichuan peppercorn and that mysterious green pickle juice.

二荆条 Erjingtiao chilli is the most common chilli variety in Sichuan, and is milder in terms of spiciness. So they can be used as burnt chilli without causing a lot of hurt to the consumer. The robust flavours of the chilli worked better with sautéed prawns than the usual sweet pepper.s

This is a classic Sichuan dish that has made it to the Chinese National Banquet menu. 开水白菜 Baby Cabbage Consommé looks exactly like its name – Napa cabbage hearts in a tureen of clear water.

Despite its simple appearance, this dish is flamboyantly wasteful and extravagant, leaving a mountain of depleted remains of chicken, Chinese ham, egg whites (for extracting the consommé) long with outer Napa cabbage leaves left over from extracting the heart.

I was surprised that this soup made its appearance in this degustation as it would be a test of the skills of the chef. Many great chefs fell on this dish, because it was difficult to get the consommé right. I guessed this was a good example of French technique and Chinese fundamentals. The consommé was similar to a French consommé, yet the flavours were definitely Chinese.

The tasting portions were served in multiple symphonies of four movements each. The first symphony consisted of different spices used in Sichuan cuisine – peppercorn, chilli, and other condiments that we came to associate with Sichuan food.

This dish features one of the 24 flavours. Sichuan pepper flavour 椒麻味 is all about the fresh pepper, and has a very numbing flavour profile. Abalone in itself is a rather bland shellfish, but when it is poached in Sichuan pepper, the dish came to life.

Nearly died from drinking the wonderful broth, the Sichuan peppercorn 麻椒 caused a slight allergic reaction. I never felt the suffocation that I got from the numbness that went down my throat. Note to myself – avoid excessive amount of green peppercorn.

Yuxiang (“fish fragrance”) flavour 鱼香味 has nothing to do with seafood or fish, but the flavours of other seafood dishes like red chillis, ginger, garlic and scallions. And surprisingly, The Bridge used this flavour to cook fish – a kind of taboo within the culinary cycle of Sichuan).

There’s a backstory to this dish. Chef Andre was trying out the new recipes when a distinguished Sichuan chef came to the restaurant with his wife. He served the work in progress to the chef. He frowned at the presentation at first, but when he tried it, he gave the following glowing comment, “Tradition meets innovation, expect the unexpected, but still overwhelmingly familiar.” Of course, I paraphrased 😉

When one mentions of 水煮 Sichuan poaching, one would think of a bed of shredded celtuce, bean sprouts and sliced beef being poured over with copious amount of red, hot chilli pepper oil. The high temperature of the boiling oil cooks the beef instantly. But here, the thin slice of wagyu sirloin was wrapped with sautéed mushrooms and poured over with a spicy sauce. The boiling sauce poached the beef perfectly.

When you cut into the parcel of goodness, you can see the amount of ingredients used to make this deceiving simple dish. The flavours were all in the sauce.

In Sichuan restaurants in China, the dan dan noodle dish is more of a snack than a main and is usually served in a small bowl. At first glance, I was amused by the size of the portion. The chopsticks will give a perspective how much noodles were there.

The St Regis I was staying in Chengdu was reputed to serve one of the best dan dan noodles in town, and I had been eating them for breakfast. This version as good as the one in St Regis, only the portion was really too small to make any conclusion.

Sichuan cuisine is not all about spice and numbness as these four courses in this second symphony.

This course consisted of two parts – both favourites from the ala carte menu.

If you are thinking Peking duck, you will be disappointed. 烤鸭方 Duck Rice Sandwich is made from glutinous rice cubes mixed with chopped roasted duck meat. The duck skin ala Peking duck style is placed on top and the cube is then pan fried to a crispy using duck fats. The mysterious green powder made its second appearance to round up the course.

When one thinks of pigeon, nothing comes close to Yuen Long roast pigeon. Fat, succulent birds brined in a savoury sauce and deep-fried before serving. This version of 香脆乳鸽 Baked Pigeon is very similar. Coated with puffed wild grains and seasoned with Sichuan peppercorns, it was surprising not oily like the HK version and the bird was cooked ala minute to the right doneness – another rarity that is not found in the HK version.

It was so good that I couldn’t resist ordering the whole bird. Another backstory. The baked pigeon has a very famous fan – Director John Woo. He was filming in Chengdu together with Tony Leung (yes, Shang Chi’s father) and came to this restaurant for a meal. He was so impressed with this baked pigeon that he ordered 30 portions to go. Not sure if he shared it with his film crew.

发菜酱香炒鳝丝 Sauteed River Eel with Black Moss and Enoki Mushroom has no black moss as it has been deemed illegal to harvest them. But it was a solid sautéed freshwater eel nevertheless. Unlike the Shanghai version, this one is savoury with fragrant fermented sauce flavour 酱香味.

豆䜴鲮鱼油麦菜 Stir-fried Lettuce Hearts with “The Bridge Truffle” is a play on the traditional Cantonese favourite stir-fry vegetable dish.

These are not real truffles, but fermented soy beans rolled into truffle-like balls. They were brought to the table side and then shaved onto the sautéed lettuce. Nice touch.

But I would say the piece de resistance of these four movements would be the 丰收节气竹筒饭 Seasonal Bamboo Rice.

Because of the wet weather, bamboo forests are a common sight around Sichuan. The indigenous people of the mountain regions would cook rice inside the cavity of these bamboo, resulting in a really fragrant rice. The Bridge uses ingredients that would be part of Po Zai Fan and stuffed them into the bamboo. In this instance, chopped waxed meat and sausages were used. Delicious.

Dessert at The Bridge would not be a simple affair, if my previous experience with Chef Andre told me. The first part of two dessert presentations started with four pastries inspired by the street food of Chengdu presented like a petit four.

The last course of the evening consisted of a trio of sweets that would invoke many childhood memories.

手工老街蛋烘饼 Traditional Sichuan Pancake is sold as a street food in Chengdu. It can be filled with any fillings, both savoury and sweet.

Here it was filled with creme fraiche, banana cream and cocoa powder. Tasted a lot like the Mi Jian Kueh that my sister makes.

And next up, two other favourites recreated with an innovative twist.

Kudzu cake is a mochi-like gelatinous cake that is popular in Japan. It is often mixed-up with mochi because of its texture and equally bland taste. Kudzu cake is traditionally eaten with soy bean powder and brown sugar syrup. Here at The Bridge, the kudzu cake is made with milk instead of water. And mocha powder was also used to give it more taste profile.

Almond tofu has been my childhood favourite. This is a delightful remake of my childhood memories, in luxe format.

The almond tofu was covered with a meringue made with almond powder. You cracked it open like creme brûlée to get to the bottom almond “tofu”.

The kudzu cake made its second appearance here as almond tofu, topped with a delicious almond cream. You mix everything together to get an almond flavour bomb going in your mouth.

Good food makes a good restaurant, but it’s the service and the details that make a great restaurant. The Bridge has all the boxes checked. The service staff was accommodating to the foodblogger in me and paced the dinner perfectly. And they took effort to explain all the courses in detail.

If Chengdu has a Michelin guide, I am sure The Bridge will be on it.