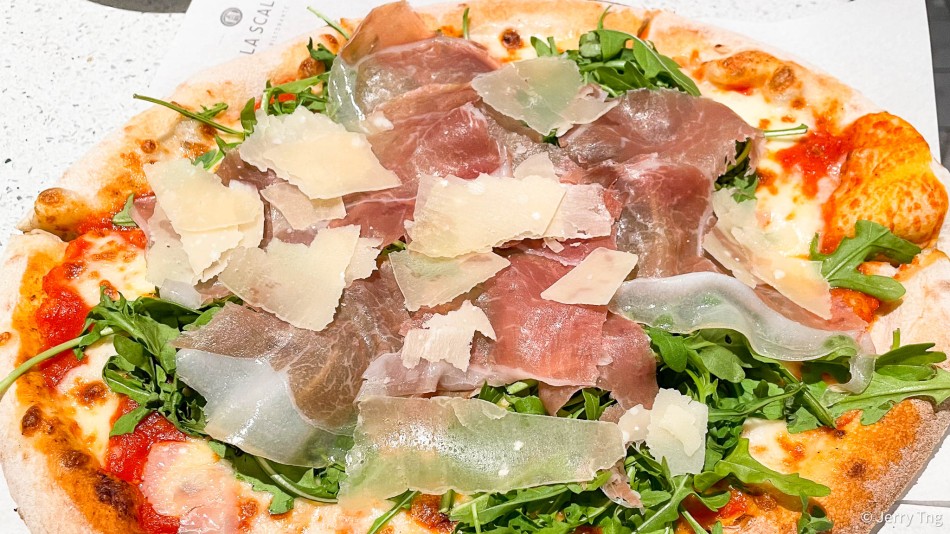 We wanted to try the Japanese restaurant in The Capitol but when we reached there, we made a turn and went for Italian instead.

La Scala is named after the famous opera house in Milan and serves Italian cuisine. It has a fancier interior decor than the sushi restaurant (which looked like a normal sushi-ya but charges a ridiculous price), and we could not detect anyone in the teppanyaki. We saw what we wanted and promptly got ourselves seated.

After ordering, the complementary bread was promptly served. The bread sticks were delicious. But the bread was really dry and cold, however it was surprising soft.

WOW!!!! The crust was soft and fluffy, the sauce was plain pomodoro but delicious with the fresh herbs and spices. And the parmegianno was perfect in this simplest of all pizzas.

The pizza was very balanced with the right amount of moisture but not soggy. And the ingredients used were all top notch. We were surprised we were the only table that ordered pizza despite the presence of the stone oven in the restaurant. But again, these gourmet pizzas need to be consumed when they are baked. Delivery will kill the pizzas.

Again the top notch ingredients shone through the salad. Sun-dried tomatoes from Calabria, a region famous for their tomatoes, were condensed flavour bombs. Mixed with fresh artichokes and not those pickled canned ones and large fresh heirlooms, all these vegetables stole the show from the octopus.

The octopus was tender and juicy and the pesto and tomato dressing worked really well here. And the pickled caper berries – first time I tasted them, now I am a convert. They tasted like Thai mini brinjals but much softer.

Princess wanted ravioli, and chose the tortellacci al porcini. “It came without a sauce”, she exclaimed. “And it tasted like cardboard”, I concurred.

You must be confused, aren’t we having ravioli? Why is it called tortellacci? Shouldn’t it be a tortelloni? What are the differences?

Taking the space vacated by Equilibrium, La Scala is competing with some really good Italian restaurants in the vicinity. The food was really good, especially the pizza. Definitely a level higher than Equilibrium.

However, the service needed some major upgrade. Firstly, they were not versed in the Italian names of the menu and had to repeat in English just to be sure. But it could also our poor Italiano. And they were not sure if things were unavailable.

But the last straw was when they tried to clear the plate when it was obviously not done yet. And then there’s the tables – they are so small that you cannot even put another else when you have a pizza.

Even the food was a good reason to come back, the service and environment would be a major turnoff.