Nationally recognized for seafood excellence, Elliott’s Oyster House on Pier 56 is where Seattle goes for seafood. Waterfront restaurant with a bay view known for its selection of oysters & sustainable seafood. 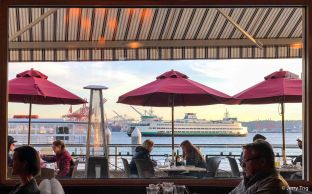 Pier 56 started out as Arlington Dock in the late 1800s. Built and owned by a retired ship captain, the dock was destroyed in the Great Seattle Fire of 1889. Then in 1902, the Northern Pacific Railroad came along and constructed three new piers—which included Pier 5 (now 56)—to capitalize on the gold rush. The U.S. government renumbered all the piers at the start of World War II.

Pier 56 made headlines in 1965 when Ted Griffin, owner of the Seattle Marine Aquarium, bought and displayed Namu—a 22-foot orca whale.

(Today, orcas are protected from capture in the U.S.)

When it comes to raw oysters, plucked fresh from cold, nutrient-rich local waters and shining with the subtle merroir of their salty origins, Seattle is a dream. In the Pacific Northwest, home to amazing farms like massive Taylor Shellfish, there’s no need to douse superbly formed varieties of Kumamotos, Virginicas, Pacifics, and native Olympias with heaps of cocktail sauce, though local chefs often create delicate mignonettes that perfectly complement the oysters’ pure, clean taste.

Oyster bars in Seattle are an educational experience, too. Shuckers here are deeply knowledgeable about oyster farmers’ growing methods, flavor profiles developed by way of their origin, and more. They’ll help diners decipher the many mysteries of these briny beauties. From right of the lemon wedge, in clockwise direction:

They have more oysters than the ocean. The varieties of the rocky bivalves are reliably fresh—all local and sustainably caught. The champagne sorbet with the oysters makes it a classy affair from the usual cocktail sauce or shallot vinegar.

When they laid down the tools for the cioppino, I knew a treat was on the way.

Made with Dungeness crab, grilled scallop, white prawn, Alaskan True cod, Penn Cove mussels, bacon, tomato–herb broth, the cioppino was so flavorful, tasted like the ocean. And a generous portion too.

For more than 30 years, Elliott’s Oyster House has been Seattle’s showcase for classic Northwest seafood. This classic seafood house is renown for simple preparations that highlight the natural flavors of the finest seafood in the Pacific Northwest. Must visit when you are in the vicinity.