If an architecture can represent the soul of Changsha, that would be Tianxin Pavilion. The pavilion has witnessed the many ups and downs in Changsha’s history and is the symbol of hope and pride for the people of Changsha.

Inside the pavilion, visitors will find plaques detailing the history of ancient Han dynasty battles that occurred here, back when the first city wall was made of mud. The pavilion itself did not exist until the Ming dynasty, however. And in recent history, the pavilion and city walls played a major role in events of the 19th century Taiping Rebellion.

Lasting from 1850-1864, the Taiping Rebellion is one of world history’s bloodiest civil wars. It saw the ruling Qing dynasty defend China against the emerging Taiping Heavenly Kingdom. The breakaway state was formed in southeastern China by Hong Xiuquan, a Christian convert. He not only wanted to overthrow the Qing dynasty, but to completely revamp Chinese society.

During the Battle of Changsha which took place in the 1850’s, Taiping forces launched fire arrows over the city walls. And while Qing forces were distracted, the Taiping army were building underground tunnels. During some intense fighting, gunpowder buried by Taiping forces exploded, blowing large holes in the walls.

Fortunately for the Qing army, reinforcements began to surround the Taiping rebels from the outside, causing them to flee. But the Taiping army returned once again, and they were eventually repelled by canons moved to the walls from other parts of the city. 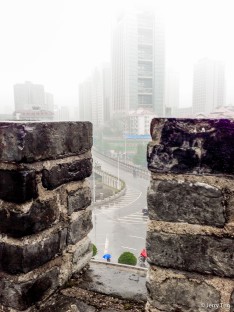 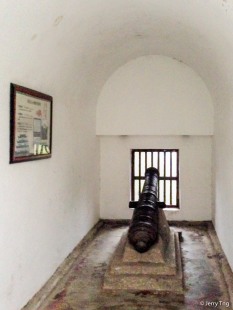 Eventually, the Taiping army did manage to take Changsha in 1855, but they were kicked out just a year later by a local militia known as the Xiang Army. Miraculously, the wooden pavilion mostly survived intact throughout all the fighting. 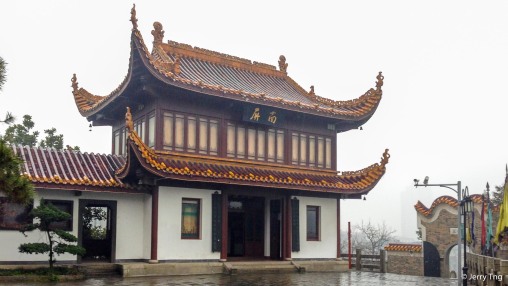 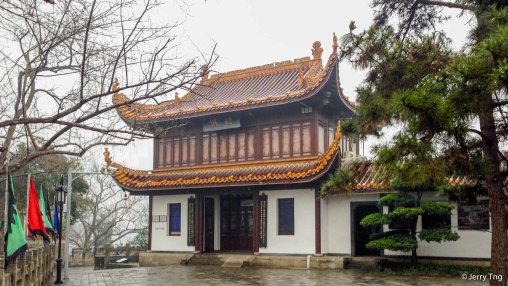 There are 62 Chinese guardian lions on the balustrade. 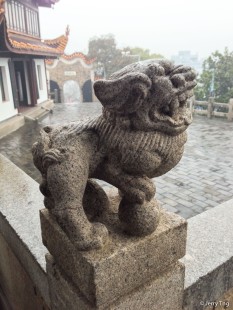 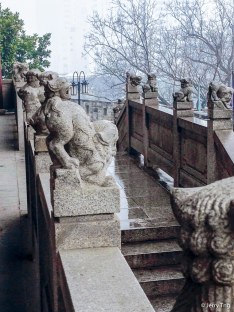 In 1981, the CPC Changsha Municipal Committee and the Municipal Government of Changsha organized the reconstruction of Tianxin Pavilion. The construction took four years and lasted from 1981 to 1984. On December 1, 1984, the project was completed.

On the other end of the Tianxin Pavilion, there’s the wide park area surrounding the entire site, which stretches out to 30,000 square meters in total.

Chonglie Pavilion was built in 1946, its origin were Pavilion of the Noon Cannon「午炮亭」 and National Humiliation Memorial Pavilion 「国耻纪念亭」. The pavilion is octagonal supported by 16 immense pillars. Under the eaves is a plaque with the Chinese characters 「崇烈亭」 written by Chiang Kai-shek. The original pavilion was burnt down in the 1938 Changsha fire. 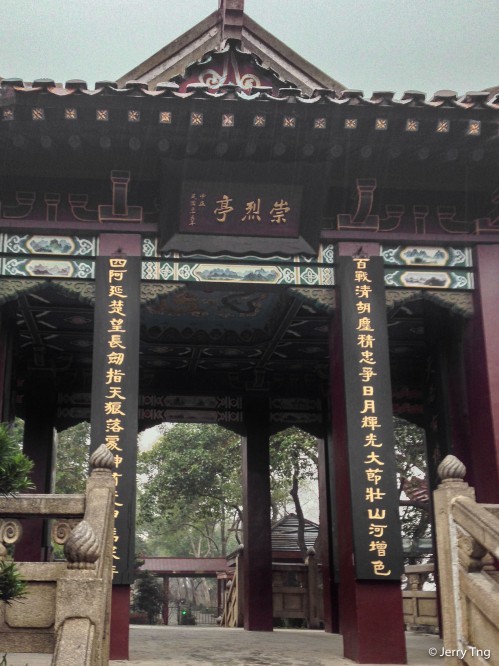 To honour the officials and soldiers that died in the Changsha Campaigns of the Sino-Japanese War, all sections of society donated enthusiastically to build a memorial building complex consisting Chonglie Tower 「崇烈塔」, Chonglie Gate 「崇烈门」and Chonglie Pavilion 「崇烈亭」 by the side of Tianxin Pavilion. 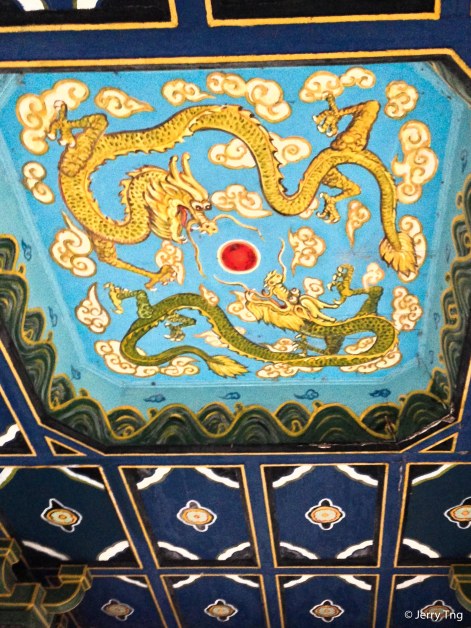 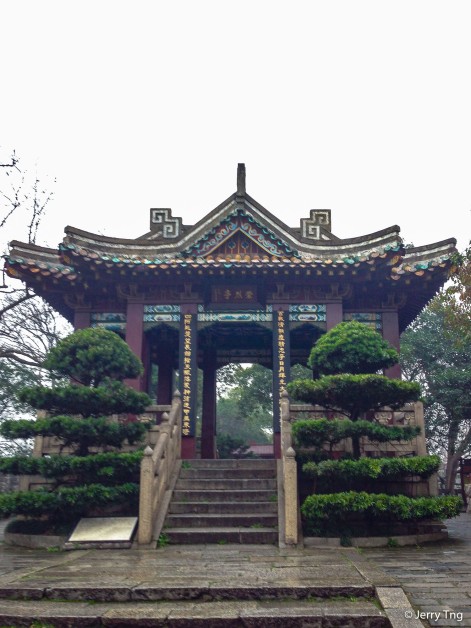 Chonglie Gate was built in 1946 with granite. It was donated by Chiang Kai-shek, Chen Cheng and Zhang Zhizhong. It is 8.5 m (28 ft) wide and 5.9 m (19 ft) high. Two couplet was engraved on the two side pillars. It says “氣吞胡羯，勇衛山河” and “犯難而忘其死，所欲有甚於生”. The gate was completely destroyed in the Cultural Revolution and rebuilt in 2006.

Chonglie Tower also known as “White Tower” (白塔). It was built in 1946. The 6 m (20 ft) tall, hexagonal-based Chinese tower is made of granite. The sphere represents the world and engraved with the map of China. The Chinese lion on top signifies the sovereignty of the Chinese of their own country and they will defend it at all costs.

Directly opposite to Chonglie Pavilion is currently a teahouse inside a historical building.

And next to the courtyard of the building is a small gate that leads you to the Ming dynasty’s Old Wall 古城牆.  The walls were built by the Protector of Changsha in 1372, replacing an even older mud wall that was in existence since BCE 202, when Emperor Liu Bang of Han dynasty appointed Wu Rui as King of Changsha, and he built a wall around his fiefdom. The original was all but torn down for the road around the pavilion after the Xinhai Uprising of 1923, except for this remaining 251m. 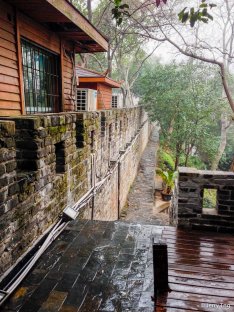 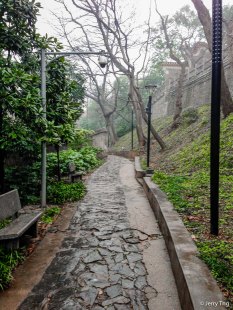 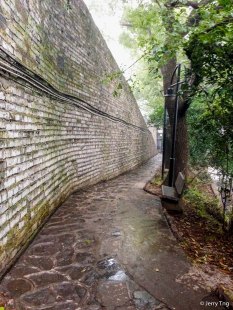 As you walk along the old walls, you will come to a site where it is almost overgrown by the shrubs. You will see a small stele that says 城南書院 City South Academy, one of the four most famous academies from imperial China. Of the most famous of all was preserved for posterity in Hunan University called Yuelu Academy. 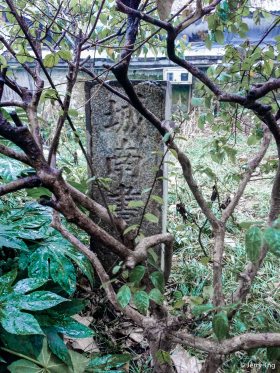 And finally when you walk through the Martyr’s Garden, you will come to the North Gate of the park. 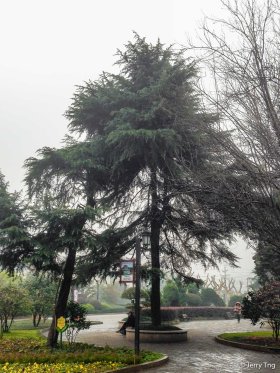 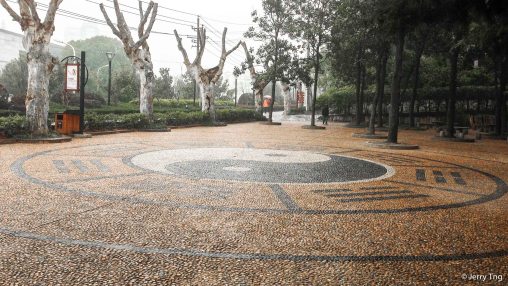 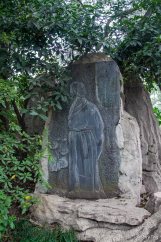 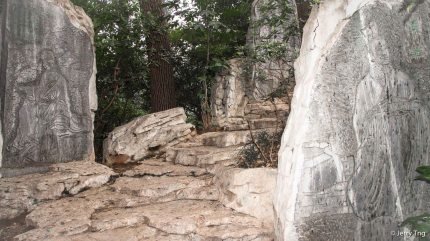