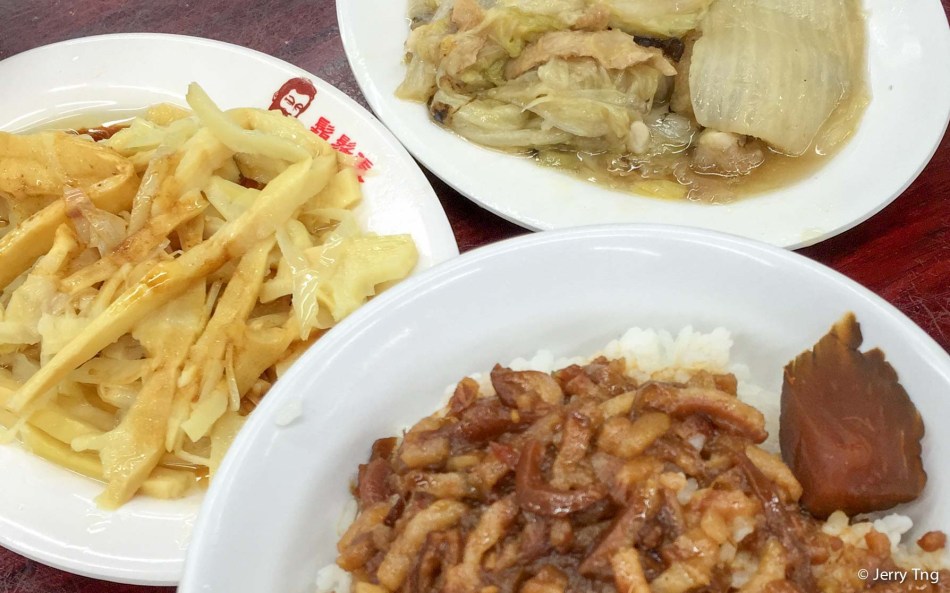 滷肉飯 Braised minced pork rice is a street food from Taipei. It can be found all over the island. But 鬍鬚張 Formosa Chang is the one that has made it chic.

In the old days, eating meat was often a luxury. How does one feed an entire family in the rare moment one has a small piece of pork to work with? You cut it into small pieces, braise it for a long time to create a savory braised meat sauce that’s bursting with flavour, and mix it with lots of steaming, comforting rice so the whole family can enjoy it. That’s how the Taiwanese Lu Rou Fan 滷肉飯 came about, when the retreating KMT army came to the island after losing the Chinese civil war.

Braised pork rice or Lu Rou Fan 滷肉飯 is one of the most beloved Taiwanese comfort foods. Second only perhaps to a piping bowl of beef noodle soup (and even then, a very close second).

There is, however, an on-going debate on whether this dish originated in Taiwan or Shandong, China. Apparently, 滷肉飯 and 魯肉飯 are written differently, but both sound alike and the latter states the origin of Shandong in its name. To help set the record straight, the Taipei government actually launched a huge campaign in 2011, handing out 1000 bowls of the rice and claiming ownership of the dish.

Taiwanese sausage is a dried, hard sausage usually made from pork and pork fat. It is normally smoked, sweetened, and seasoned with rose water, rice wine and soy sauce. It has been compared with lap cheong 臘腸 or Chinese sausage, but the Taiwan version has not be cured like lap cheong. In Taiwan, it is usually grilled and served with sliced garlic. The basic Taiwanese sausage has a slightly sweet taste with a beautiful crisped skin. When you take a bite, the skin bursts filling your mouth with juice.

I had always thought that this was made with fresh bamboo shoots. Then I realised it was actually made from dried bamboo shoots that were found in abundance, and the savoury taste came from the salt used for the preservation of highly perishable bamboo shoots.

Taiwanese A-Choy is a very popular leafy green vegetable native to Taiwan and it’s often served blanched or in a garlic stir-fry. Other name is Taiwan Sword Leaf Lettuce. It is very easy to grow and gives harvest in 4 to 8 weeks. OK, sometimes Formosa Chang may not use A-Choy when it is not the season, but you get the drift.

In times like this we can take herbal soup to helps us improve our appetite. 四神湯 Si Shen Soup is made of 4 main ingredients – mountain yam 山藥/淮山, lotus seeds 蓮子, water lily seed 芡實 and China root 茯苓. Usually one would add pepper, barley, pork ribs, intestines and/or stomach for tastes. It helps to strengthen the spleen and digestive system, calms the nerves and improve poor appetite.

That may explain why you always find one Formosa Chang near hospitals.