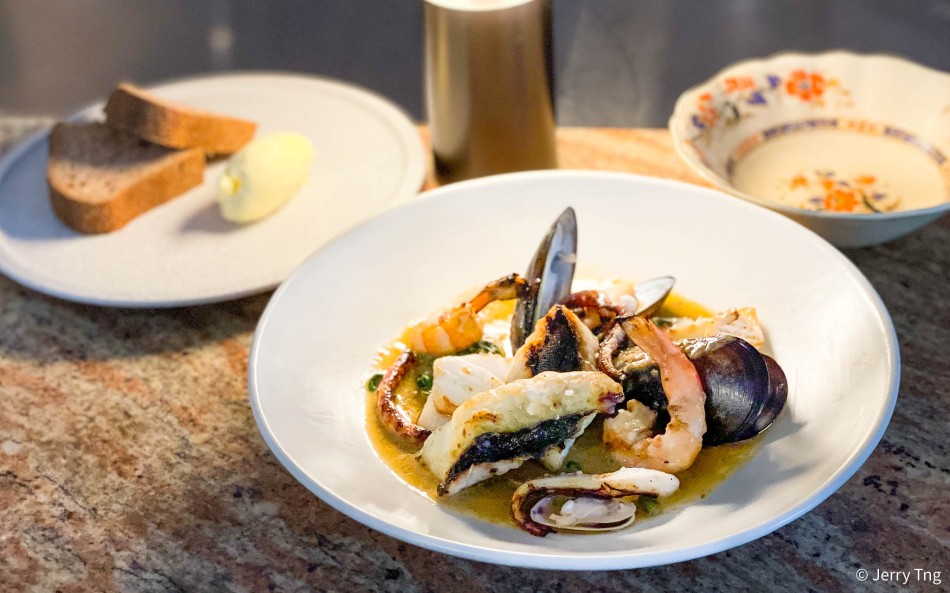 Melbourne has lots of good eats and a bustling cafe culture. Hazel is a combination of both – a really good eats from an outstanding cafe/bistro owner.

Hazel is a seasonal and produce driven restaurant in the heart of the Melbourne CBD that has been brought to you by The Mulberry Group. I have not been to any other establishments by them as they are mainly bistro and cafes, and not in CBD Melbourne. Hazel was the first fine dining restaurant they have opened in the middle of the CBD in a historical building called Richard Allen & Sons Building.

I managed to get myself a place at the bar for their “Experience” sitting, as all the main tables were fully booked. They have two floors of dining, but no place for me. Melbournians are out with a vengeance after such a long period of lockdowns and shutdowns. But I am still pleased to get a seat at such short notice, given that this trip to Melbourne after two years was least planned.

I ordered a couple of appetisers. They are like little tapas, and you can order one piece each of the appetisers, which is appreciated for lonely diners like me. But be warned, the costs of these appetisers add up very quickly and could easily cost more than the main attractions.

Nduja is this spicy, spreadable salami that comes from the Calabria region of Italy. The first time I had it was at Salted and Hung, where they put it on their grilled octopus. Here, the chef put it on the wood roasted tiger prawn. Delicious! The flavour bomb from the nduja added to the sweetness of the crustacean, given it the savoury, spicy, meaty taste. It was like my mother’s heh bi hiam (spicy dried shrimps). I regretted only ordering one piece of the prawn, I could eat the nduja butter all night with toasts.

The croquette was stuffed with meat from a pig’s head. This choice of meat is very European, where the French, Spanish, Portuguese and Italian have featured many beautiful dishes from this usually forsaken ingredient. The German stuff them in their sausages 😉

The croquette only had that minimal amount of starch to hold it together. What you got was a whole chunk of porky goodness – little bits of meat, skin and other chewy, soft tissues with spices and onions. The sweet and sour peach butter added another dimension to the savouriness of the croquette and reduced the heaviness of the deep frying.

I chose a seafood stew for my main course as I am a fan of all things seafood cooked together – cioppino, bouillabaisse, seafood stew, whatever. It was a generous serving of seafood – huge succulent mussels, tiger prawns, sea bass (or as they call it in this country – barramundi), octopus, clams – all seafood had been grilled on wood fire before incorporated into the seafood stock.

I realised that bread and butter were not free in many of the restaurants in Melbourne and Sydney this time round. But some bread was needed to soak up all those stock. The bread was sourdough which lent its sour taste to the soup. I would prefer the traditional baguette or some plain loaf instead of this flavoured loaf that interfere with the superb broth.

And to round off a fantastic dinner, some Australian cheese. Three types were specially selected tonight – a hard chess that is like a cheddar, a blue cheese and a goat cheese. Served a quenelle of fig jam.

I finished all the cheddar and blue. I left the goat cheese alone. It tasted like my wet dog.

History of the Building

The highly significant Flinders Lane building erected for Richard Allen and Son Pty Ltd to the design of Reed, Smart and Tappin in circa. 1897, making it among the first Melbourne warehouses to use the North American inspired Tall-arched Romanesque style.

Hana Hakim of Stella Collective is behind Hazel’s fit-out. The colour scheme is soft and neutral with American oak floorboards, pale-leather banquettes, Hazelnut-coloured bentwood chairs and pink-stone benchtops. Ornate light fittings and mirrors feature on otherwise minimal walls, and the space is flooded with natural light from the large south-facing windows. It’s designed to reflect elements of the building’s former life.

It was an excellent dinner, the food and service were impeccable. Seated on a high chair at the bar was not exactly an experience, but I was compensated with good food and a view of what’s going on around the restaurant.

This is not a dating place, at least not not the ground floor. Many were friends gathered for a good meal and friendly banter. The decibel of the place can get quite high after the drinks were poured. I hope the second floor is better. But likewise if you want to have a good meal and socialise, this is the place.