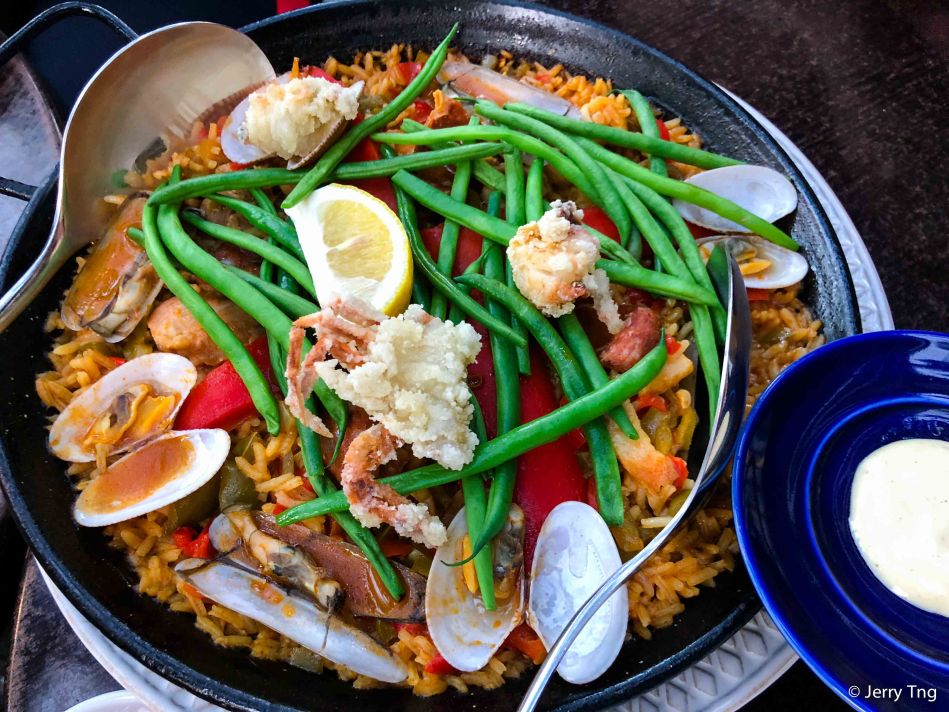 This was a preview of what we will be getting at a user conference in Madrid. Cerveseria is situated in the perfect spot to spend some twilight hours watching the world goes by.

In Makati Greenbelt shopping mall, there’s food choices a plenty, but mostly American fast food and burger diners. Cerveseria Makati stood out as a Spanish tapas place in Makati – the place to be at after office hours. Cerveseria is brewery in Spanish. In Spain, it is synonymous to a pub, and usually it serves tapas and preservas (canned food).

Trivial : Do you know that Philippines was named after King Felipe of Spain by the Spanish colonial masters? That’s also why the people are called Filipinos and Filipina, while the American spelt it with a PH instead of a F.

Cerveseria Makati serves proper sit-down dinner that included roasts, pastas and pizzas, with a limited selection of tapas. Be aware though, even Philippines was once a Spanish colony, tapas were generally quite bad in this country. They were either too oily or too salty. So I did not have a high expectation as we were just picking a drinking hole after a long day, and we were hoping to get some sisig and adobo to go with our San Miguel.

Gambas al Ajillo – Garlic Prawns in Olive Oil is a tapas perennial favourite. You can almost not go wrong as long as the shrimps are fresh. I liked their version as it was liberal with the garlic and spice.

Salpicao – Tenderloin Beef and Garlic. First, salpicado is a Spanish word which means “spattered with”. Considering that the Philippines was a Spanish colony for over four centuries, “salpicao” just might be a derivative of salpicado. Second, farther search led me to references to salpicao as a Brazilian word for “salty”. Beef Salpicao is a quick beef stir-fry dish flavored with Worcestershire, butter, garlic, and red chili pepper flakes. The beef was overcooked, so I would not recommend this one.

Bacalao Croquetas – Salted cod croquettes. Bacalao is salted dried codfish, and in this tapas classic, it was flaked and combined with potato mash and then breaded and deep-fried. Can’t go wrong again, unless too much bacalao spoils the balance or the frying pil is too old. Here, it was executed well.

Spanish Sisig – Sisig with Chorizo. Sisig is a Filipino dish made from parts of pig head and liver, usually seasoned with calamansi and chili peppers. Sisig was first mentioned in a Kapampangan dictionary in the 17th Century meaning “to snack on something sour” and “salad”. Typically, it was a peasant dish. But recent times, due to increasing effluence and health consciousness, it was given an upgrade with better ingredients like chorizo and pork belly. However, a good sisig would still require the pork crisps and chicken liver.

Morcilla – Blood Sausage with Mushrooms, Raisins, Pine Nuts. In England, it is referred to as black pudding, in France it is boudin noir, and in Spain, there is morcilla. Though dark and pungent, morcilla is perhaps the most enticing of all blood sausages, unique in flavor and steeped in meaning. Morcilla is emblematic of Spain’s gastronomic philosophy. It reflects the country’s commitment to minimizing food waste and their deep respect for eating local. Here, they have combined the sausage with mushrooms and let the flavour seeped into the fungus.

Navajas y Chorizo al Vino Blanco – Razor clams and chorizo with white wine. The navaja is a traditional Spanish folding-blade fighting and utility knife. Navajas de afeitar, or simply, navajas are razor clams that can be found in abundance along the coasts of Spain, and for some reasons, here in the Philippines.

Patatas Bravas – Potatoes in spicy tomato sauce and aioli. Another tapas classic, and can go so wrong so easily. I prefer the one from FOC, and this one was only so so.

Tuetano Asado – Grilled Bone Marrow. If you like Sup Tulang, you would love this. Simply take a calf bone, split in half or cut in sections, and grilled it with spices and butter. The result is a succulent marrow that you can dip with toasts. Good steak houses actually serve this as a condiment. Yum yum.

Callos – Ox Tripe, Ox Tail, Chorizo, Olives and Bacon. This is not exactly tapas, but a typical Spanish dish. Callos (pronounced a “Karlios”) is a stew of tripe, oxtail and bacon. Every household has their special and secret ingredients, but in general, it was just rustic goodness in a pot.

Paella Cerveseria – Bacon, Chorizo, Chicken, Squid, Shrimp, Soft Shell Crab. Again, their house paella and not tapas. But instead of pizzas and pastas, I rather have paella. This was a generous portion, but it was adapted to local tastes with deep-fried seafood (perhaps to hide something…). You can also taste that the ingredients were incorporated rather than coked to death in the traditional paella like the ones from Casa La Valencia.

If you are in Makati and want a place to chill with a bunch of friends and watch the evening comes to life, this is the perfect spot. Inexpensive, friendly service, but you must bear with mosquitoes if you sit outdoor. And you have to sit outdoor to engage in people watching – you can’t have the pie and eat it.