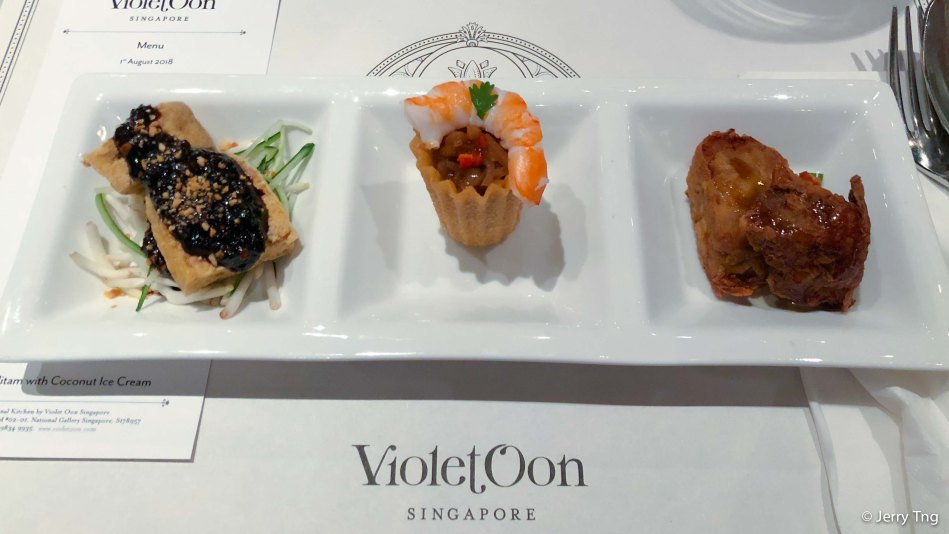 While Malcolm Lee’s rendition of Peranakan food at Candlenut breaks away from tradition, Violet Oon serves the classics done right. The recipes have not been trifled with, so you get dishes like ayam buah keluak, beef rendang and babi pong tay excatly as they should be. That’s not to say she doesn’t play around every now and then – the dry laksa is a killer rendition of the familiar original that you’ll be licking clean.

As we have a really large group, Violet came back with a set dinner menu for the table that would feature the classics as well as dishes that would appeal to foreign palates.

(R-L) Ngoh Hiang, Kueh Pie Tee, Tau Hu Goreng – each of these trio has a long heritage and story behind them.

Ngoh hiang, also known as heh gerng (as it is known in Taiwan) or lor bak (as it is known in Penang) is a unique Hokkien and Teochew dish widely adopted in Indonesia, Malaysia, the Philippines (where it is known as kikiam, que-kiam, or ngohiong) Singapore, and Thailand; in addition to its place of origin in eastern China. It is essentially a composition of various meats and vegetables and other ingredients, such as a sausage-like roll consisting of minced pork and prawn (or fish) seasoned with five-spice powder (五香粉) after which it is named, rolled inside a beancurd skin and deep-fried. It is usually served with chili sauce and a house-special sweet sauce.

Pie Tee is a thin and crispy pastry tart shell kuih filled with a spicy, sweet mixture of thinly sliced vegetables and prawns. It is a popular Peranakan dish. The shells are made of flour and though some stores will make them from scratch, they can usually be found ready made in most supermarkets. Similar to popiah, the main filling is shredded Chinese turnips and carrots, and usually these two dishes are sold by the same stall in hawker centres.

Tau Hu Goreng is a dish of fried tofu commonly found in Indonesia, Malaysia and Singapore. When preparing the dish, cakes of hard tofu are deep fried until golden brown. The bean curds are then cut diagonally in half and arranged on a plate garnished with bean sprouts, cucumber and scallion. A thick sauce is prepared with shallots, garlic, chili peppers, shrimp paste, soy sauce and tamarind juice. In Indonesian and Malay language, tauhu refers to ‘tofu’ and goreng indicates ‘fried’. Tofu was originated from China and brought to Southeast Asia by Chinese immigrants to the region. While deep fried tofu is also featured in Japanese and Chinese cuisine, the sauce used is definitely from Southeast Asia with the use of tamarind and shrimp paste.

So there you have it, three starters each with a long heritage and cross-cultural influence in its creation. That’s the basis of Peranakan or Nyonya cuisine.

Butter Prawn – Butter Prawn is a relatively new Nyonya creation combining the best of Malay, Chinese, Indian, and western ingredients, this is a knockout dish in terms of taste, smell, and presentation.

Other than prawn, the key ingredient of this dish is curry leaf. Highly aromatic in nature, curry leaf is widely used in southern Indian cuisine and Malaysian cuisine. The exotic scent of these dark green leaves saturates coconut milk based curries with rich fragrance and perks up seafood dishes such as Butter Prawn and Black Pepper Crab.

The yellow strips in the picture are killer in taste – the toasted kerisik (grated coconut) reveals layer upon layer of complex flavours – buttery, salty, sweet, spicy, and garlicky working off one another seamlessly and perfectly.

Ikan Tempra (Sweet and Sour Fish) – Ikan Tempra is a Nyonya Dish, Ikan is the Malay word for fish, and Tempra is the way of cooking a braised dish using onions, white pepper powder, sugar, black soy sauce, light soy sauce and a squeeze of lime or calamansi juice.

Violet used a piece of sea bass (or barramundi if you want to sound more ‘atas’) and fried it to perfection. The fish was then smothered with a sweet and sour black sauce that gave the dish more complexity in its taste profile.

Beef Rendang (Coconut Beef Stew) – Rendang is a rich and tender coconut beef stew which is explosively flavorful and beef rendang is the most popular rendang. Called “rendang daging” locally, it’s arguably the most famous beef recipe in Malaysia, Indonesia, and Singapore. Beef rendang is of Indonesian origin, a much-celebrated concoction from the Minangkabau ethnic group of Indonesia. It’s often served at ceremonial occasions and to honored guests.

Violet served one of the most tender and moist piece of beef rendang I have ever tasted in Singapore. The sauce was so good that I had to go for second serving of Jasmin rice.

My mom used to cook this at home, but we are not Peranakan. But this is the story of SIngapore, we are all so diverse and yet we embraced each other’s culture, especially the food culture. I don’t think my foreign guests were used to this kind of stewed vegetable dish though.

Chicken and Prawn Bostador – A dish from our Eurasian heritage. Eurasian cuisine is an amalgamation of Asian and Western cuisines, with Portugese, Dutch, British, Malay, Chinese, Indian, and even Nyonya influences. This dish features minced chicken and prawn in a fragrant spicy sauce with chilli padi.

Dry Laksa – Many tried to create a laksa that is dry, and the result was usually using the same rempah for laksa and frying it with vermicelli noodles. Not only the taste was unsatisfying, the result was quite a far cry from the wet version. Hence, I thought that laksa would never be able to be available dry. Until I discovered Violet Oon’s version.

Violet’s version was moist like a pasta, the laksa noodles were even smothered with the rich and fragrant sauce. If you closed your eyes, you could imagine yourself eating the wet version – very satisfying.

Here’s the recipe if you are interested to try to replicate.

Pulot Hitam with Coconut Ice Cream – I loved pulot hitam as a kid. It is essentially boiled black glutinous rice with lots of sugar, mandarin peel and panda leaves into this porridge and served with a dash of salty, creamy coconut cream. Here, Violet upgraded the cream to an ice cream and the result was sweet on sweet. I still preferred the old, tradition of salty coconut cream.

The service was fantastic, the price a bit steep, food quality was high, and the ambiance fantastic.