I am a frequent visitor of Hong Kong – my favourite city in the world. And whenever I visit, I would not include hotel breakfast because I know where I would be going for breakfast.

I used to stay at Wanchai Novotel quite a bit and became rather familiar with the eateries around it. Right opposite Novotel is the Michelin Bib Gourmand Joy Hing. But what I really enjoy are the numerous porridge stores around Hennessy Road and Lockhart Street.

And my favourite is Cheung Kee Porridge on Hennessy Road. I would do my usual morning walks around Victoria Park and make my way back on Hennessy Road, and I would usually reach Cheung Kee around 8am – just in time for breakfast.

Just by looking at the shopfront, you can sense the nostalgia and the old-school vibes. A warmer cabinet kept the dough fritters hot. The place can only seat around 24 comfortably, but during the peak hour they would try to pack as many as 30 into it. Most of the clientele are residents around the area or office workers on their way to work. A TV on the wall would blast the news channel. Everyone was very conscious of time and the crowd waiting for a seat, so everyone would try to eat their porridge as quickly as possible and bugger off.

Youtiao or Fried Dough Fritter 油条 is the best friend to porridge. It is a simple deep fried fritter that is similar to donut, except it is less dense than doughnut. The outer layer is really crispy and it is perfect to dip it in porridge, rolled it up in chueng fun 肠粉 (which is then called 炸兩), rolled up in omelette (which is then called 蛋皮馃子), and crushed, mixed with salty radish and wrapped with sticky rice (饭团).

The Cantonese name for youtiao 油炸鬼 literally means “oil-fried devil” and, according to folklore, is an act of protest against Song Dynasty official Qin Hui 秦桧, who is said to have orchestrated the plot to frame the general Yue Fei, an icon of patriotism in Chinese culture. （桧 and 鬼 sounded similar in Cantonese.) It is said that the food, originally in the shape of two human-shaped pieces of dough but later evolved into two pieces joined in the middle, represents Qin Hui and his wife, both having a hand in collaborating with the enemy to bring about the great general’s demise. Thus the youtiao is deep fried and eaten as if done to the traitorous couple. In keeping with the legend, youtiao are often made as two foot-long rolls of dough joined along the middle, with one roll representing the husband and the other the wife.

While at it, you may also order a glass of soy bean milk made in-house. This creamy soy-based milk drink is unsweetened, and you can add sugar if you want, but I love the pure, creamy taste.

Here’s a trivial – never drink unboiled soy milk that has just been milled from soaked soy beans. Uncooked soy bean milk is laxative and can cause a bad tummy.

My favourite porridge is Pig Organ Porridge cooked a la minute. 生滚粥 or Quick Boiled Porridge is made a la minute by boiling porridge and then introducing the raw ingredients like pig innards, chicken bits, fish slices, anything you like. And at Cheung Kee, you can literally combined 20 different ingredients. But remember the bowl can only take that much porridge.

The pig liver and kidney at Cheung Kee are cleaned properly and do not have the organ taste. And the liver is cooked just right and still 粉粉 (cream?) – this is a texture that I could not find an English word to describe, because I don’t think anyone find liver a delicacy in the West. And the kidney did not have the lingering ammonia smell – again not something that my Western friends would be looking to eat anytime soon.

You must be wondering what the youtiao is for. The porridge is boiling hot. The fastest way to eat it quickly is to dip the youtiao, soak it with porridge and then eat the whole soggy mess. Or you may also order a plate of fried noodles and do the same. Definitely a carb-laden breakfast. 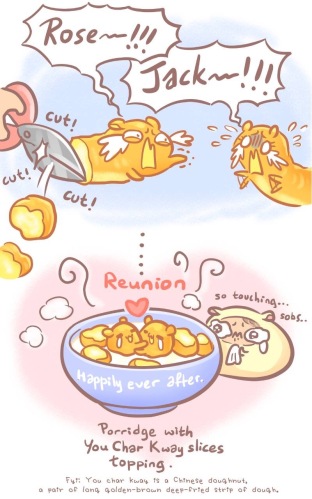 [From FB Artist from KL, forgot name, will update later]

0 comments on “My favourite HK breakfast”