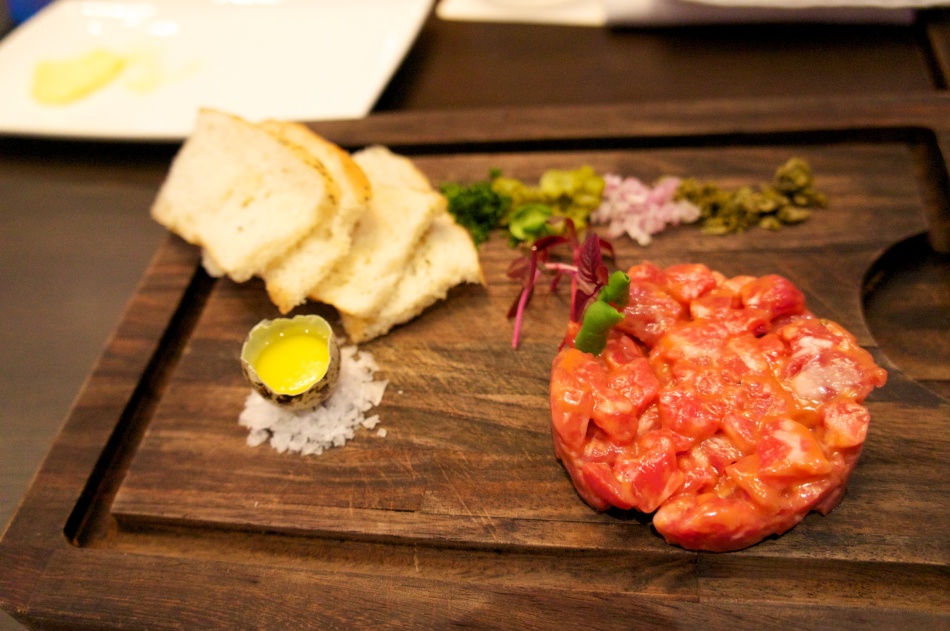 Located at the top of Tower 1 of Marina Bay Financial District, LeVeL33 features a Microbrewery and Pub food with a twist. No, you do not get fish and chips, or Sheperd’s Pie. You get something better. 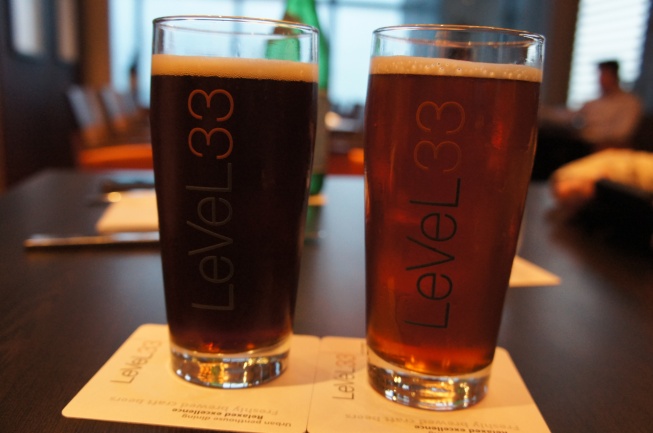 We started with a trio of beer. The Lager was fruity with a sweet aroma – a very lady’s drink. Machomen like us went for Ale and Dark Beer, dry and bitter after taste. (But secretly I think the Lager was the best brew of the three.) There are of course other choices available.

We ordered three starters. An abtly named Pig and Snail (***), it is a piece of escargot on top of a deep fried breaded spring roll of shredded pork – fantastic beer food. We can have this all night with the beer… errr maybe not, it does get a bit oily after a few more.

The Beef Tartar (**1/2) was also very tasty. Served with chopped pickles and onions, with a quail egg and seasalt, the beef was fresh and tangy without losing the texture due to chopping it into such fine cubes.

The Foie Gras (**) was the least attractive of the three but that’s because the other two were outstanding. These starters really started the evening well.

Next the main courses. We ordered Calf Liver (**), which is a liberal piece of cow’s liver, lightly sauteed on top of mash and rich sauce on top with sauteed mushrooms. You need to like livers to like this dish as it still have a bit of the “livery” smell. Nevertheless we enjoyed it.

Next on the table was Dutch Veal (*). Quite dry and not well seasoned, and the dish taste like the Liver? Not the piece of meat but the combination of mash, mushroom and sauce with the veal.

Gambas (***) is a soba and prawn dish rich with a seafood sauce and the chef brought out the best of the King Prawn, delightful and filled with the powerful taste of the prawn, it was as if the head was smashed and mixed with the soba.

The fourth main we had was Duck Duet (***) – which is made up of a Duck Confit and Duck breast. The confit was crispy and well seasoned – excellent as it was not oily or over cooked. The breast was small and thinly sliced. Again it was flavorful and not over cooked. So it retained the texture but still tender.

We ended the evening with 2 sweets. A trio of ice cream made up of a mango sorbet, a chocolate chip mint ice cream and a milk gelato. The flavours change with the seasons so if we rate this season’s choices I would give it ***. The milk gelato was outstanding.

DIY Truffles (**) came with a chocolate and a strawberry dip that allowed you to coat the dark chocolate truffle with almond, caramel or coconut shavings. Fun for the kids and adults, and the almond, caramel, coconut toppings complemented the butter chocolate perfectly.

Damage was around $80 per head so it was quite value for the quality we got. But the best part of the evening – the million-dollar view of Marina Bay. Would definitely go again.